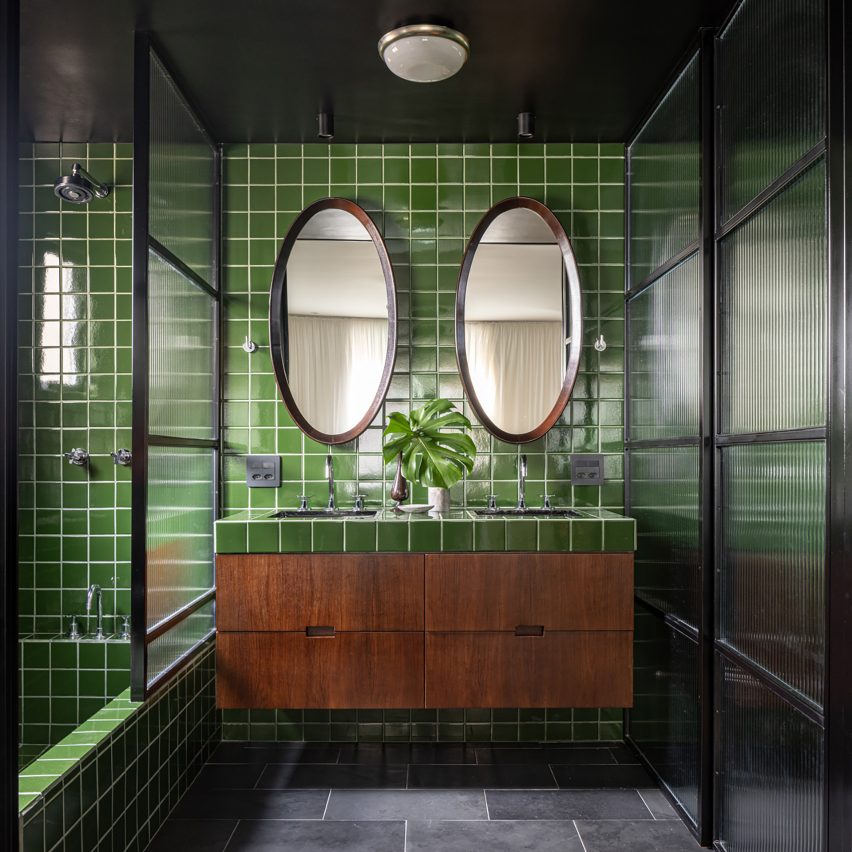 Green tilework in multiple rooms is contrasted with terracotta plaster at this São Paulo apartment, renovated for a couple by local studio Casulo.

The 220-square-metre apartment was overhauled for friends of the designers, who made it clear that the space “should not have a minimalist atmosphere”.

“Shortly after their wedding in early 2020, the couple bought an apartment at a closed-door auction, without knowing the actual status of the property,” Casulo partner Camila Abrahão told Dezeen. “On the first visit, we realised that the state of the apartment did not reflect its profile at all.”

Therefore, the studio overhauled the interiors, keeping only the positions of the rooms and the wooden floor in the bedroom suite.

The most drastic improvements were made to the kitchen, which was previously subdivided into non-functional spaces including a small balcony with a barbecue.

Casulo opened up the room to create a large space that integrates the grill, while a series of sliding, fluted glass panels were installed to close off the cooking area as desired.

Green tiles cover the floor, the sides of the central peninsula and the back wall. In contrast, a terracotta volume begins in the kitchen and wraps around to the entryway, concealing the powder room.

“Almost all the references brought by [the client] had a green colour,” said Abrahão. “We brought the earth colour to balance and contrast it.”

Various shades of green are also used in the living area for the dining table, sofa and a tiled bar adjacent to the full-height windows that enjoy views of the skyline.

Flooring in this social space was swapped for black slate, while the remaining walls and a masonry bench that connects to the enclosed balcony were painted white. 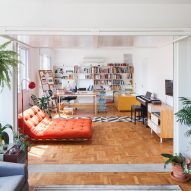 Although re-lacquered, the dining table was the only piece of furniture retained from the original apartment, because it was too heavy and cumbersome to remove.

“The furniture was almost entirely extracted from antique dealers in the city of São Paulo and we combined these pieces with some of the contemporary design,” Abrahão said.

In the bedroom suite, the same tiles from the bar were applied to the walls and tub in the bathroom, where the black slate flooring and fluted glass panels are also repeated.

Apartment living is extremely common in São Paulo, Brazil’s largest city, and renovations there often involve injecting colour and personality into the homes.

Examples include an interior filled with peach, green and purple for a fashion editor, and another with burnt pink ceilings in the bedroom.

The photography is by Joana França.