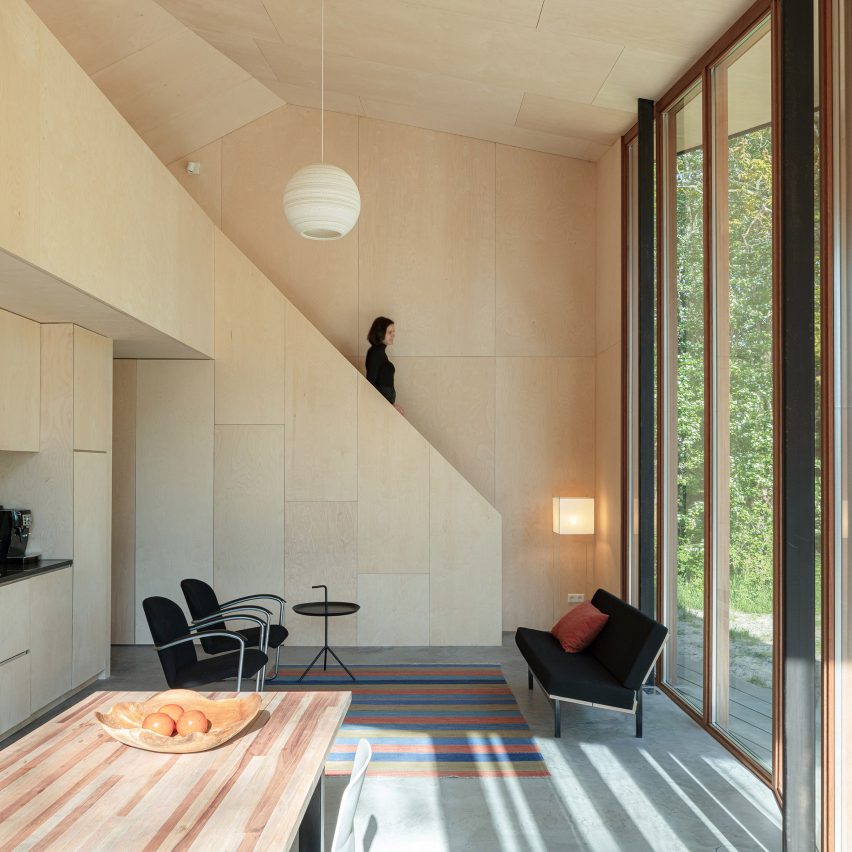 Dutch office Orange Architects has completed a compact holiday home on the island of Texel in the Netherlands, featuring an interior that adapts to its occupants’ changing needs throughout the day.

Rotterdam-based Orange Architects designed the holiday cabin for a site nestled in a forest, from which the owners can walk to the North Sea coast in just ten minutes.

The building is clad externally in black-stained timber and features an irregular roof form that rises on one side to accommodate a loft-level sleeping area.

The house occupies just 70 square metres of its woodland site and is carefully positioned in response to the prevailing climate.

Inside the building, light-coloured birch panelling creates a warm contrast to the black exterior.

Rather than using walls to separate the living areas, the architects employed a system of movable wooden panels that can divide the interior into dedicated functional zones if needed.

During the day, when there is less need for private spaces, the ground-floor living room, bedroom, entrance hall and shower area form a single open space.

In the evening, the rotating birch screens can be used to separate the bedroom and transform the shower and sink area into an en-suite bathroom.

“By allowing the interior to be transformed, the space inside is optimised, keeping it compact and efficient, avoiding unused rooms during the daytime,” Orange Architects said.

Despite its compact footprint, the house’s interior feels bright and spacious due to the use of light-coloured timber and the height of the main living area.

Windows incorporated into the southern elevation extend to five metres, while skylights positioned above the bedroom, library and attic allow plenty of natural light to enter.

Doors can be opened to connect the living room with a south-facing deck. The outdoor space is lined with vertical slats that can be rotated to form a protective screen when the wind blows.

The building was prefabricated by a specialist contractor on the mainland before being dismantled and transported to the island.

This method allowed the house to be quickly assembled on-site, with the interior fittings added to an already watertight building envelope.

Black timber cabins are a popular typology for remote hideaways. You can see ten more examples in our black-cabin round up, which features cabins from around the world, from Norway to Brazil.

Recently, Office of McFarlane Biggar Architects + Designers designed a cabin clad in black-stained cedar for a site on British Columbia’s Bowen Island, while Studio Puisto created a timber cabin that is raised above the ground in a Finnish forest.

Photography is by Sebastian van Damme.

The post Holiday Home by Orange Architects is a timber-clad cabin with a flexible interior appeared first on Dezeen.