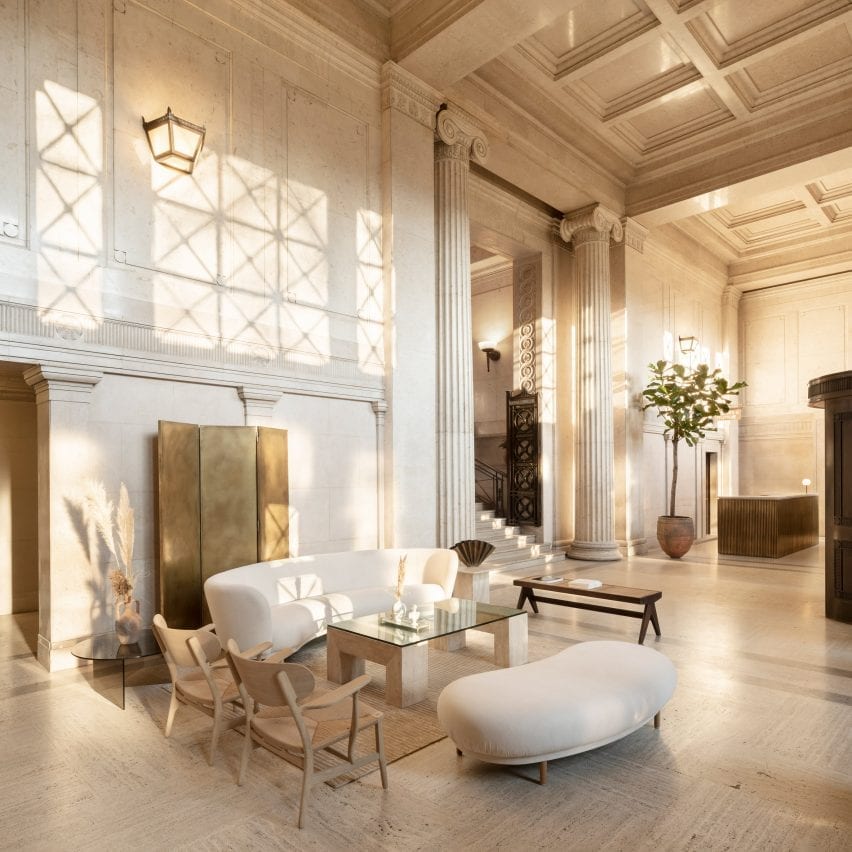 Architecture studio Hutchinson & Partners employed a neutral palette of cream-coloured hues to complement the stonework of this 1920s office building in London, which was previously refurbished by British architect Will Alsop.

Hutchinson & Partners‘ extensive refurbishment of the Victoria House was carried out by the London and Berlin-based firm for the workspace provider LABS, which acquired the property in 2019 with a vision to transform the building into a modern workspace.

The 13-storey building sits on the eastern edge of Bloomsbury Square and was originally designed as the headquarters for the insurance company Liverpool and Victoria Friendly Company by the architect Charles William Long.

The neoclassical Grade-II listed block, which was previously refurbished in the early 2000s by Alsop, contains 27,000 square metres of office space, alongside retail, hospitality and event spaces.

The studio aimed to update the historic marble-lined space to give it “a new, modern layer”.

Throughout, the team used a palette of natural hard-wearing materials – such as marble, terrazzo, patinated brass, bronze, oak timber and leather surfaces – that complement the original architecture and its elegant proportions but update it with “modern and minimal” details.

The ground floor’s grand spaces – a Subiaco marble and Italian travertine entrance hall, a terrazzo staircase and a triple-height central hall – have been reworked to host a series of social spaces.

These include a central bar, members’ lounge and informal meetings spaces, while the upper levels have been updated to provide flexible workspaces with communal lounges, kitchens, libraries, meeting rooms and phone booths clustered around central timber-lined axes.

The project includes more than 750 square metres of space within three communal suites.

The Alsop Suite and The Long Suite provide spaces for the office tenants to meet with clients, or collaborate and unwind, while The Heritage Suite contains a state-of-the-art gym, multi-use studio alongside a lecture room, boardroom and meeting room suite.

Some interventions introduced by Alsop during the previous 2000s refurbishment, such as a series of suspended office pods, remain untouched, while others have been updated, such as the floating glazed platform which has been reimagined in bespoke terrazzo and roughly hewn travertine slabs.

“The aim was to align the sense of old and new, while retaining a strict sense of historical narrative that easily allows the viewer to delineate between the past and the present and allows them to experience the building as a unified whole,” said the studio.

“This emergent language has been used as a basis on which the evolving phased refurbishment of the wider building has been carried out.”

British designer Fred Rigby was commissioned to create a bespoke furniture collection for the project that draws upon the soft forms found in nature.

The collection of curvaceous pieces includes a series of sinuous slatted oak privacy screens, oak and boucle fabric armchairs, and a collection of tables that nod to the oak doors of the landmark building.

Other recent London office projects include an office interior by Hollie Bowden with a rich material palette informed by London’s gentlemen’s clubs, and a mid-century medical laboratory that has been transformed into a flexible office space by dMFK.

Photography is by Ståle Eriksen.