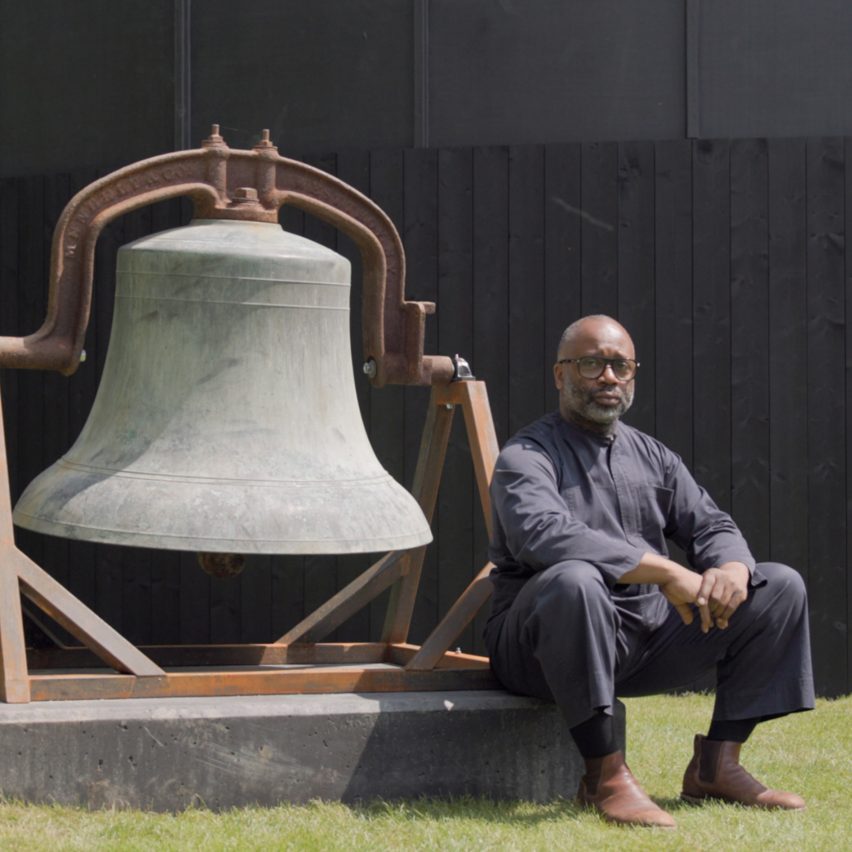 Serpentine Pavilion designer Theaster Gates explains the role of architecture in his artistic practice in this exclusive video interview produced by Dezeen in collaboration with the Serpentine Gallery.

Chicago-based Gates, who is the first solo artist to be commissioned to design the pavilion, spoke to Dezeen at the cylindrical structure called Black Chapel, which was unveiled earlier this summer.

Speaking to Dezeen in an exclusive video interview, Gates explained he sees an affinity between the disciplines of art and architecture, but doesn’t refer to himself as an architect.

“I’ve always had this belief that art and architecture were just two peas in a pod, that there are moments when great art requires that you imagine new things in space that require a certain amount of poetry in order to manifest them,” Gates told Dezeen. “Architecture does the same.”

“I’m careful never to call myself an architect because I value too much the discipline of architecture, the schooling and tooling that goes into making architects architects,” he said.

Gates collaborated with architecture studio Adjaye Associates to create the simple cylindrical structure, which was built almost from a black-stained timber structure supported by wooden laminates and galvanised steel with an exterior wrapped in black rubber.

Its form references the bottle kilns of Stoke-on-Trent, which Gates investigated during an ongoing research project for the V&A museum in London, which looks into the making, labour and production of clay.

The pavilion includes three openings: two large entrances that “slice” the pavilion and an oculus in its roof structure.

“Labour is a beautiful way of transmitting energy”

The pavilion’s interior is lined with seating and a series of tar paintings created by Gates in memory of his late father, who was a roofer.

“I thought that I would attempt to make a series of works that could both punctuate the space and also acknowledge the fact that my interest in architecture is very much that of a builder, a person who works with his hands,” he explained.

“The seven paintings are a kind of salute to or memorial to the history of labour, in the ways in which labour is a beautiful, spiritual way of transmitting energy.”

As a finishing touch, Gates installed a bronze bell in front of the pavilion, salvaged from the St Laurence Church in Chicago’s South Side, which was demolished in 2014.

The bell was installed to be rung before performances take place in the space.

“St Laurence has become a very important reminder within my practice of the loss of spiritual spaces, but also the salvaging or the salvation or the capturing of things that are lost as a result of cities changing,” Gates said.

The chapel-like structure was designed to act as a sanctuary, encouraging rest and contemplation amongst its visitors.

The form is reflective of the artists’ interest in spiritual spaces, referencing Bramante’s 16th-century Tempietto in Rome.

“I found when people get together and do things together, often something sacred could happen.”

Gates aimed to create a space for gathering and performance, which was partly informed by his experience performing with his musical ensemble the Black Monks of Mississippi.

Throughout the summer, the pavilion is hosting a programme of events ranging from talks and performances to live music, including a performance by musician The Vernon Spring, who appears in the video.

The pavilion is Gates’ first major architectural piece, and adds to a body of work that spans a multitude of disciplines including sculpture, ceramics, music and performance, as well as urban planning and preservation.

Architecture has featured in Gates’ work before in a regeneration initiative, which saw him rescue sites of cultural and civic significance in Chicago’s South Side to revitalise them into public spaces.

The artist said that his work on the Serpentine Pavilion has unified the parts of his artistic practice that had seemed disparate such as music, spirituality and

“When you build the right vessel, it unifies that interest in ceramics, the spiritual, the built environment,” he added.

Gates’ building is the 20th Serpentine Pavilion to be built since Zaha Hadid created the first in the series in 2000. Since then, pavilions have been built by numerous architects including Frida Escobedo, Bjarke Ingels and Sou Fujimoto.

Black Chapel has been purchased by the Therme Group and will be disassembled and relocated after the summer.

This video was produced by Dezeen for the Serpentine Galleries as part of a partnership. Find out more about Dezeen’s partnership content here.

The post "I am careful never to call myself an architect" says Theaster Gates in exclusive video interview appeared first on Dezeen.