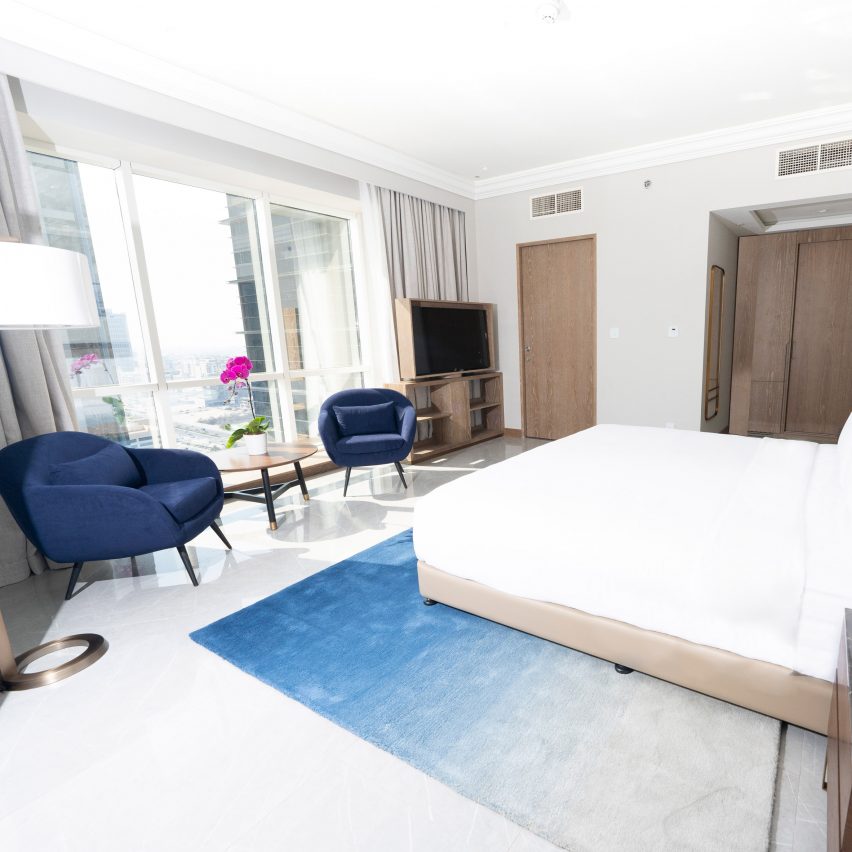 Dezeen nsn: studying at the IE School of Architecture and Design encouraged interior designer Rasha Al-Tekreeti to focus on “the process leading up to impactful design”.

Al-Tekreeti, who is the senior interior designer at consultancy practice SAY Studio in Dubai, received a master’s in Strategic Interior Design of Spaces from the IE School of Architecture and Design at IE University.

According to Al-Tekreeti, the course taught her to focus on the thought process behind interior design and its effect as opposed to the aesthetic alone.

“My favourite part about the program is that it was not focused on design as a theme; it was more about the process leading up to impactful design,” said Al-Tekreeti.

This included doing market research, looking into the sociology and psychology behind the design, and developing “future-proof” strategic solutions using innovative design techniques.

“The program has had a great impact on both my professional and personal life,” said Al-Tekreeti. “It was an eye-opener that taught me a lot of different aspects from learning how to collaborate with people who were strangers, to managing teams based in different parts of the world.”

These skills learned at IE University have proven particularly useful to SAY Studio’s current work on the renovation of the Fairmont Dubai, a luxury hotel that is remaining open to guests while construction is taking place.

The first stage of the project sees the refurbishment of 275 rooms and suites, in a bid to heighten the hotel’s guest experience.

Designed with “the modern business traveller in mind” the rooms have been updated to house modern features while still maintaining the quality expected of Fairmont hotels across the globe.

Al-Tekreeti and her team aimed to create “timeless yet classic” spaces that spoke to both the history of Fairmont and the “innate ambitions of grandeur” found in Dubai.

“It is easy to view Dubai in the form which it holds today, a vibrant cosmopolitan city that pushes boundaries and sets global standards,” explained Al-Tekreeti.

“But if you return to a few decades ago, things were quite different,” she continued. “We felt a symbolic representation of the city’s diversity and development, and inspirational ambition could be found in the dynamism of its location.”

Throughout the hotel rooms a soft colour palette paired with natural materials work to emulate the surrounding Dubai landscape. Warm timbers are used to represent sand dunes and ocean blue-hued carpets and furniture used to convey the Arabian Gulf.

According to Al-Tekreeti, she and the SAY Studio team were driven by strategic design decisions, which included a feasibility study generated by a data operation team that considered the rising needs of business travellers and an increase in tourists during the Expo 2020 Dubai, which opened in October 2021.

“The decision was taken to bring back the Fairmont Dubai as the leading Hotel on Sheikh Zayed Road and with it to create a more comfortable and inviting space that elicits the feeling of a home away from home,” said the designer.

“Ultimately the property is looking to attract customers, bring increased value to its guests, promote loyalty and increase turnover as part of an effort to keep up with the ever-changing tastes of discerning global travellers.”

More information on IE University and the courses it offers can be found on its website.

This article was written by Dezeen for IE University as part of a partnership. Find out more about Dezeen partnership content here.