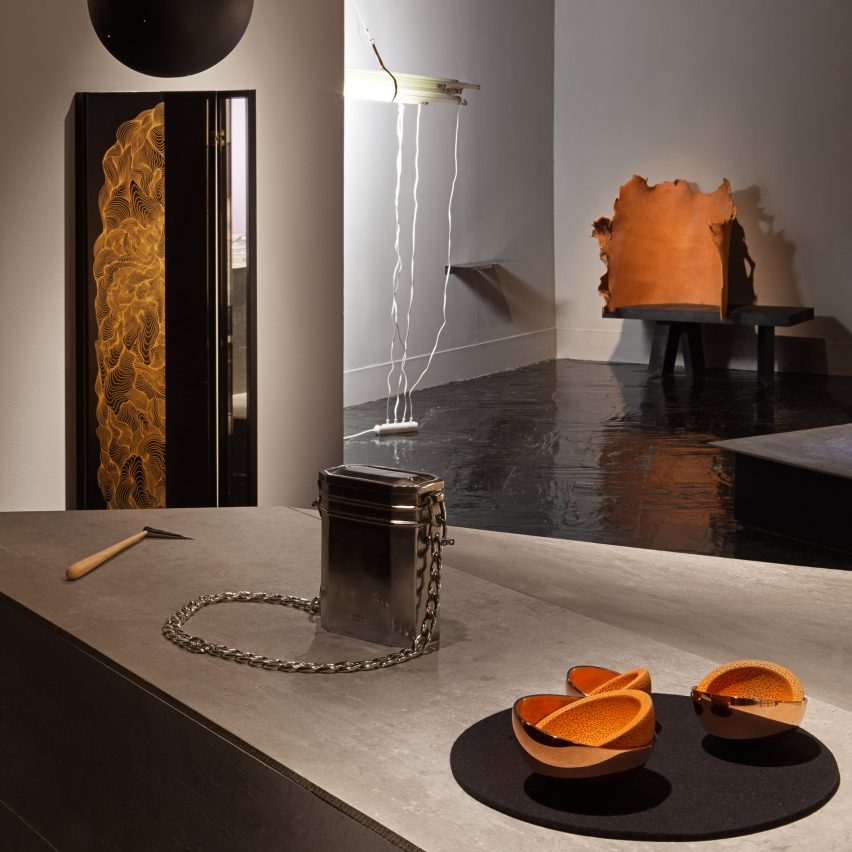 Barcelona-based gallery Il-lacions has opened an exhibition at Madrid Design Festival that features over 70 furnishings, sculptures and design pieces in an effort to explore contemporary design.

The theme of the exhibition is centred around its name, Inferences/Inferencias, which Il-lacions described as “the action and effect of inferring one thing from another, a link between ideas, the consequence of something.”

The gallery selected one piece of work by each of the artists it represents, who were then asked to become co-curators of the exhibition and invite a designer, maker or artist whom they admired to also exhibit a piece of work.

The resulting 74 sculptures and furniture pieces displayed in the exhibition were arranged on and around a large angular display table that was finished to mimic concrete.

All of the works in the show focus on one or more topics specified by the gallery, such as research and development in new materials, object functionality, sustainability and production processes.

“We would like to arouse curiosity towards contemporary design, visitors can read about the pieces and even touch them with care,” Il-lacions founder Xavier Franquesa told Dezeen. “We would like them to learn about materials, functionality and ingenuity in design.”

“We hope people understand the amount of work behind each piece, there’s a lot of research and experimentation,” said Franquesa.

“These are inspirational objects that contribute to giving interiors something more than just a function, they are emotional and unique,” it added. 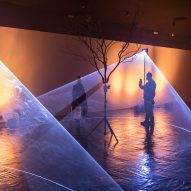 “We would like to stimulate new views on design and thinking to shape contemporary values, and together with the creators to generate a cultural heritage that reflects this time and this place,” he said.

Among the pieces on display is Joel Blanco’s Shiba-Inu dog sculpture with a built-in ASIC cryptocurrency miner. This uses the exhibition space’s electricity to mine Dogecoin and is a commentary on financial freedom and an anarcho-capitalist future, according to the designer.

Also exhibited is a Jesmonite and fibreglass chair by Six N. Five, embedded with an authentication chip built on Blockchain technology that allows the piece to be minted as an NFT.

A number of the works on show also feature reused and recycled materials.

“Josep Vila Capdevila is reusing pieces from old factories (fluorescents, cables, a pulley) and he mixes it with noble materials such as marble to create the Suspended Lamp exhibited – he classifies this piece as ‘Random Luxury’,” said Franquesa.

“The ‘Aluminium Block’ side table by Toni Pallejà is reinterpreting industrial materials, transforming them into elements that convey luxury and fashion.”

Il-lacions was founded in 2011 by Xavier Franquesa. Inferences/Inferencias forms part of the fifth edition of Madrid Design Festival, a month-long event that transforms the city into a design hub.

The photography is by Asier Rua.

Inferences/Inferencias is on display at the Cultural Centre of Villa Fernán-Gómez as part of Madrid Design Festival, which takes place from 15 February to 13 March 2022. See Dezeen Events Guide for all the latest architecture and design events taking place around the world.