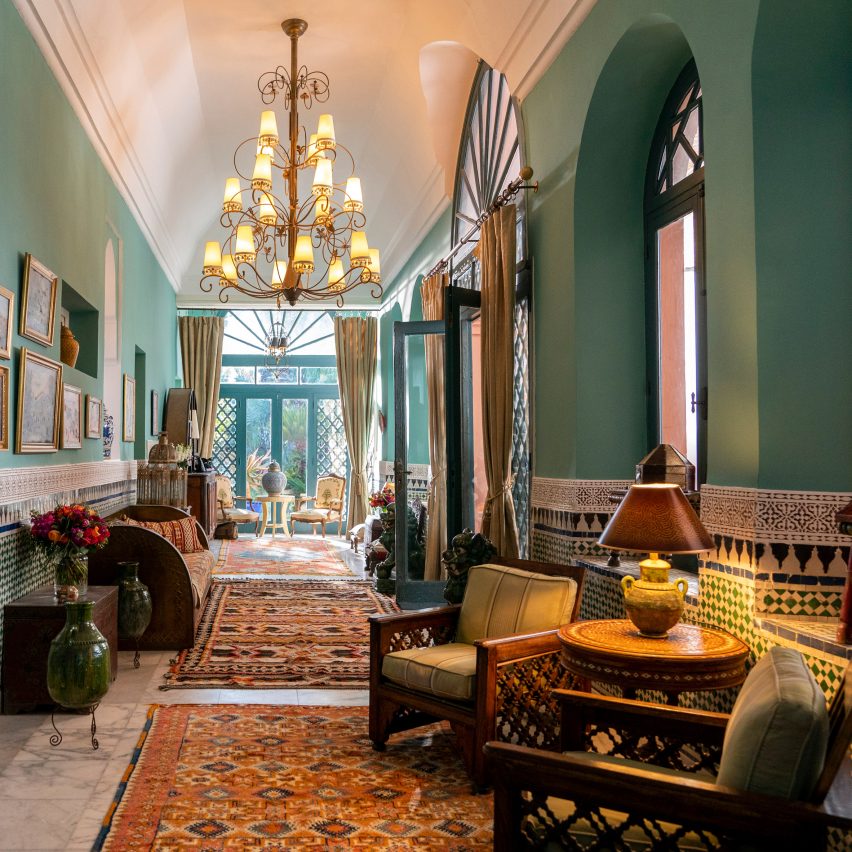 Production designer Henry Dunn drew on locations across New York to create a set that reflects the different social classes that the protagonist of the Netflix series Inventing Anna traverses.

The head office of media publication New York Magazine, Rikers Island jail and the 11 Howard hotel in Soho all appear as exaggerated versions on the 11-episode series which was released on February 11 2022.

“Our thinking all the way through this was the different varieties of wealth and the different types of socio-economic classes that Anna travels through,” Dunn told Dezeen.

“We’re trying to sort of hit all of these different types of wealth and the disparities as best we could.”

The series is a dramatisation of journalist Jessica Pressler’s quest to write How Anna Delvey Tricked New York’s Party People, an article for the New York Magazine that went viral after exposing the antics of the now-convicted fake heiress Anna Delvey, who’s real name is Anna Sorokin.

Created by American television producer Shonda Rhimes, Inventing Anna follows the lead up to Sorokin’s trial, while simultaneously going back in time to illustrate her actions.

To recreate the main locations Sorokin visited and lived in while galavanting around New York, Dunn decided to make sets both in-situ and from scratch at Steiner Studios in Brooklyn, New York, a feat which Dunn describes as “a balancing act”.

“We started at the very beginning of 2019 and we had some big beautiful stages at Steiner Studios but we realised that we didn’t have enough space for all of the things that we needed to build,” Dunn explained.

The home of one of the wealthiest characters in the series belongs to Nora, a woman who Dunn refers to as “a real art person who’s loaded with dough”. It is one of the most featured sets in the series.

Using research gathered from people who reside in New York apartments, Dunn built a duplex designed to look like a large townhouse in New York.

According to the designer, Nora’s status is best symbolised in the furnishings and decor that adorn the set.

“The way we really nailed her [Nora’s] place on the socio-economic ladder was in the finishes: whether it was the Venetian plaster, the antiques, the wallpaper or even the backsplash in her kitchen which is a tile that isn’t affordable to normal humans,” Dunn explained.

“Nora’s house had maybe five or six different wallpapers, including the ones up in the up in the guest bedroom, where Anna is living,” he added.

To further establish Nora’s status in the upper echelons of society, the designer worked with an art specialist to source paintings by artists such as Michel Basquiat and Yves Klein for the interior decoration.

“We had a wonderful person working with us for arts clearance and so we were able to get all these artists that would have been untouchable that we had to build,” said Dunn.

“Obviously, it’s not the real thing but they would send us a high-resolution file and then we would repeat over it so you could see the brushstrokes,” he continued.

“Having that sense of legitimacy meant that people understood that this well-curated piece of character-dressing is meant to tell you who this woman is.”

By contrast, Dunn wanted the journalist’s home to seem “a little dumpy” to help viewers recognise her lower social status. Her home appears cluttered and ordinary – serving to cement her position in New York society.

“We built Vivian’s house on stage – it’s not a very big apartment and we were trying to make it as realistic as possible for two people who are expecting a baby,” he said.

Creating sets from scratch gave Dunn the freedom to embellish the sets and to elaborate further than what would have been possible if they filmed everything in its original place.

For example, he constructed the bedroom and lobby at the 11 Howard on stage, drawing on interior designer Kit Kemp‘s chintzy work at the Crosby Street Hotel for inspiration.

“The 11 Howard, which was the hotel where Anna stayed has a minimalist style that we thought would look pretty threadbare on screen so we went for something that would read as much more rich on stage,” he remembered.

“We were going for with something that was more tactile and sort of a more layered look to it. 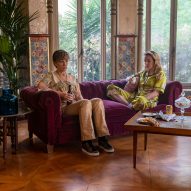 Another technique Dunn implemented was to mix high-end furnishings and homeware items with cheaper replicas that still gave the illusion of wealth.

Placing something from a high street brand next to a luxury designer can make the scene feel and look expensive on television while in comparison to reality, said the designer.

“A magic trick is if you put something in the right setting on television, you can get something like glasses at H&M or Target that will look incredibly deluxe while actually not being practical at all,” he explained.

“Place them next to plates from Van Cleef & Arpels and they look perfect.”

Due to legal reasons, the series had to create a fictional version of the New York Magazine, but Dunn wanted the made up magazine’s office to look similar to the real magazine’s headquarters.

Again, he took the opportunity to create an exaggerated “expanded and blown up” version of the real workplace, this time adding a bright red wall to the backdrop.

“We got to tour our location manager got us in there to walk around and see how the journalists lived,” said Dunn. “And so we researched it closely and then we really tried carefully create those offices as closely as possible.”

“We’re trying to do something a little more, a little extra – there is a big red wall that says New York Magazine that you see when you come in and we took that and we sort of expanded it and blew it up,” he continued.

The main challenge for Dunn came as a result of the coronavirus pandemic. Halfway through filming the series, restrictions meant that the team had to change locations and delay some filming, meaning that many scenes had to be shot in two places.

“We began shooting at the prison here in the city called Rikers Island jail and when the pandemic came, we still had 50 per cent of our scenes to shoot,” he recalled.

“I don’t think anybody at home has any idea but the waiting room and the room where Anna and Jessica meet were in completely different spots,” he mused.

Other Netflix series with elaborate sets include the playful arenas by art director Hwang Dong-Hyuk for the popular series Squid Games and production designer Grant Major’s set for the award-winning film The Power of the Dog which featured a prominent house.

The images are courtesy of Netflix.