Jobim Carlevaro Arquitetos has renovated this home in Florianópolis, Brazil adding add two bedrooms to the building and updating its finishes for a young family.

Local architects Marcos Jobim and Silvana Carlevaro were tapped to renovate a two-storey home in the Lagoa da Conceição neighbourhood of Florianópolis, a coastal city in Brazil.

At the onset of the project, much of the second floor was unbuilt, with only a single bedroom and home office. Jobim Carlevaro enclosed the entire upper level in line with the original design by fellow Brazilian architect Karin Engelhardt Rosa.

The architects added two bedrooms to the home, as well as an office and storage space. Even with the newly enclosed spaces, two balconies still overlook the surrounding treetops.

“The project was based on the creation of two extra bedroom suites, a small deposit and the remodelling of the existing office,” said Jobim Carlevaro Arquitetos.

“With that in mind, the adaptation of the facade respected the original preexisting 2.5-metre modulations designed by the architect Karin Engelhardt Rosa in the 90s,” the studio added.

This module refers to the home’s structure, which is made of steel profiles that support an awning system used for the residents’ privacy and to control glare within the home.

“The retractable awnings on the west facade also allows [occupants] to control the solar incidence and privacy of the house, changing its appearance according to the opening rhythm imposed on them,” said the architects.

The interior structural system also follows the original design, with steel columns supporting trusses, pine floors and ceilings, and drywall partitions. The roof, which was originally made of concrete, was replaced entirely by a lighter steel system.

The two bedrooms face west and are separated from the home office by a short hallway. These bathrooms have skylights built into the new roof, which help bring in more light and allow for natural ventilation. 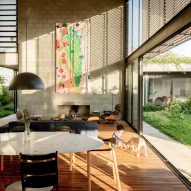 “The extra suites were positioned in the western orientation, where are located the best views of the surrounding landscape, and the office was positioned to the eastern sector,” said Jobim Carlevaro Arquitetos.

“The existing staircase allowed the creation of an open floor plan with central circulation, organising the spaces within the original modulation of the house,” they added.

Each program area is fronted by a long terrace that is accessed via sliding glass doors. The overhanging roof and awnings included here help these spaces feel private.

On the ground floor, the architects updated the landscaping, creating a new wooden walkway that leads to the main entrance.

“The retractable awning covering the lower balcony was also renovated and re-positioned by a new constructive detail joinery with the building,” said the architects.

Other recent residential projects in Brazil include a residence in Curitiba in which the upper floor is shrouded in a screen made of wooden planks, and a seaside home by Studio MK27 that offers covered outdoor spaces placed beneath an enormous roof structure.

The photography is by Leonardo Finotti.