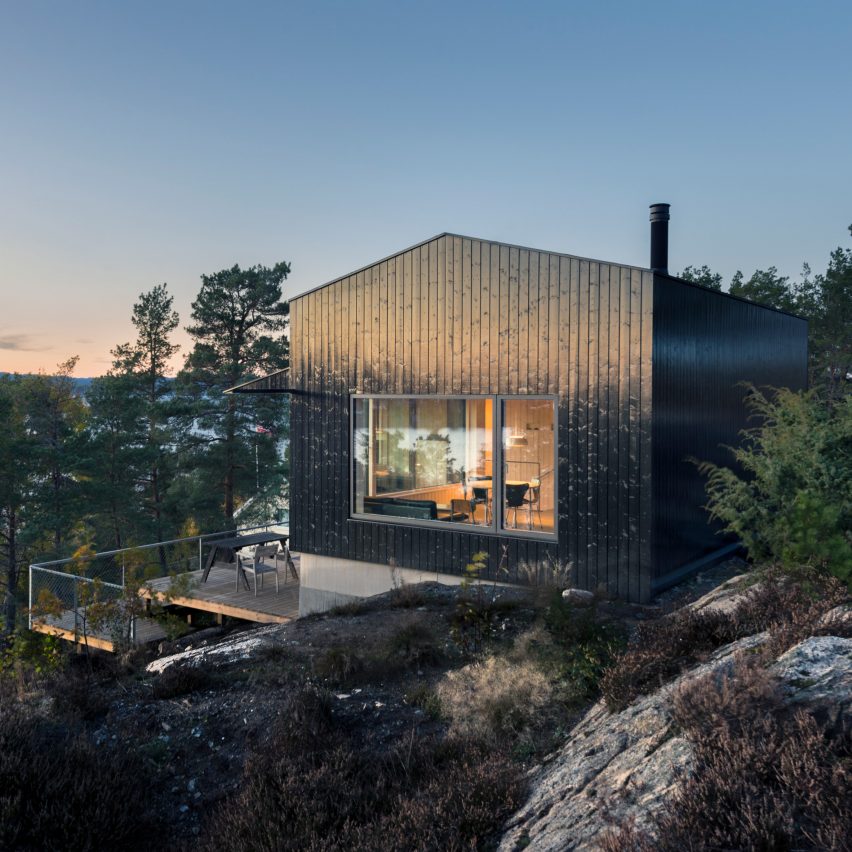 Oslo-based Jon Danielsen Aarhus has designed Cabin Son, a holiday home set on the water’s edge overlooking the Oslofjord and Jeløya island on the south coast of Norway.

The spruce-clad, L-shaped home was designed to follow the topography of the site’s naturally occurring ledges.

Jon Danielsen Aarhus let the contours of the landscape guide the footprint and orientation of the structure, spread over three levels of terrain, to create a design that was sensitive to its setting.

The 70-square-metre building functions as a weekend and holiday home for a small family year-round.

“The plot has been in the family for generations, situated between Moss and Son, in an area with many vacation homes as well as permanent residents,” he told Dezeen.

The building’s exterior was constructed from vertical clad spruce that echoes the grey hue of the rocky landscape. Inside, warm spruce covering the walls and ceilings provides a contrasting palette.

An existing cabin on the site inspired the new building and was repurposed as an annex, which has a large kitchen and living space that connects through to the new structure.

“Inspiration was drawn from a minuscule, existing cabin on the plot – both on how to relate to the landscape and orientation of the building, but also the colour scheme and roof angle,” Aarhus said.

The new-build part of the project contains three bedrooms and one bathroom, as well as adjoining outdoor spaces. The outdoor, bedroom and social spaces each have their own distinct levels.

The studio placed the new-build strategically atop ledges in the terrain. This way it didn’t have to use rock-embedded foundations and the building was able to sink into its surroundings, helping to preserve the landscape.

“The challenging terrain gave a lot of energy to the design process” Aarhus explained, adding that the building had to be placed “incredibly precisely” in order to achieve non-intrusive foundation methods.

“Not making irreversible interventions to the terrain is a respectful and sustainable strategy,” he added.

Inside, social areas such as the dining and living spaces extend to a south-west facing terrace that overlooks the water, while bedrooms and bathroom are located along less exposed areas of the footprint to ensure privacy.

Views from inside the private spaces are framed by full-width windows towards the water that stretches along the length of the building. A bridge along the west facade connect both outside spaces.

A climbing wall found in the hallway to the bedrooms adds a playful element to the cabin that mimics its environment.

The use of cellulose-based insulation and a breathable moisture barrier add to the cabin’s sustainability elements and allow for a healthy indoor climate.

Photography is by Øystein Aspelund.