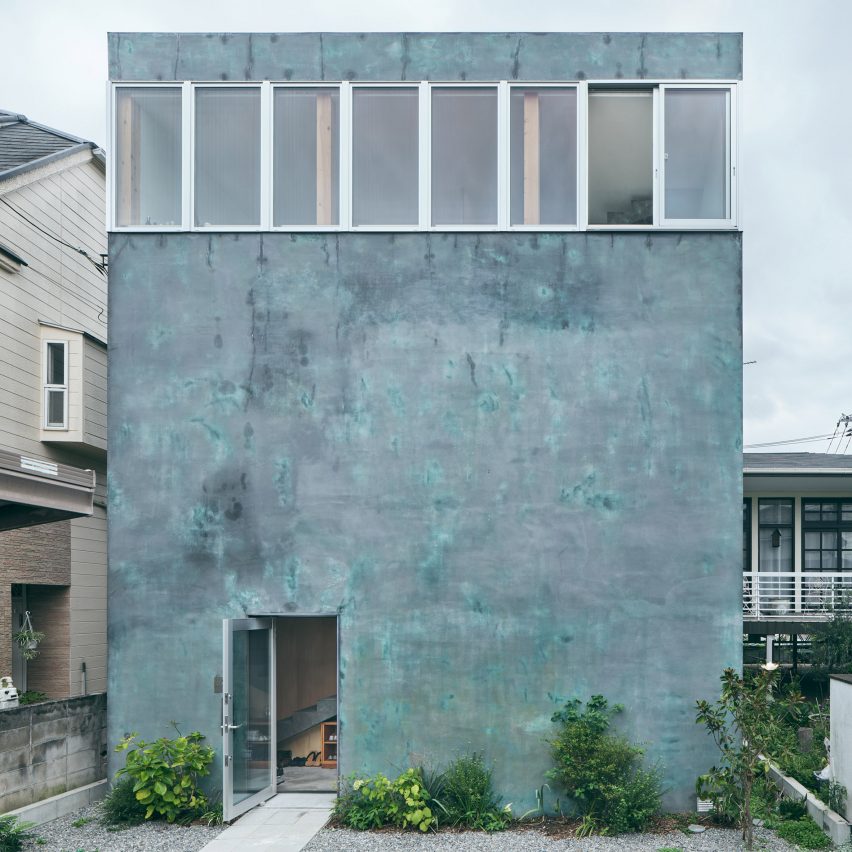 Archipelago Architects Studio arranged this house in Kanagawa, Japan, around a series of central staircases that divide the spaces and provide places to sit or relax.

The Tokyo-based architecture office designed Kappa House to occupy a compact plot that was originally part of the neighbouring house’s garden.

The client for the project is a street performer whose act imitates a folkloric water sprite called a kappa, from which the project takes its name. The house’s living spaces include a small rehearsal room where the owner can practice.

With a footprint of just 23 square metres and a building height that was limited by local planning regulations to eight metres, the architects sought ways to optimise the internal area by arranging it around centrally located stairs.

“Three layered staircases were purposely placed in the centre of the house,” Archipelago Architects Studio explained, “while maximising the floor height and creating an expansive one-room space within a limited small footprint of the building.”

The staircases contribute to the building’s structure, acting as a horizontal bracing element that eliminates the need for internal load-bearing walls.

Floor plates with a thickness of just 45 millimetres are suspended on either side of the staircases. The cross-laminated timber floors are shifted in plan and section to create separation between the various functional areas.

“These inserted thin and refined floors function as both structure and finish of the building,” the architects added. “The thinness of the floor allows light, wind, and human presence to gently spread across the space, literally inextricably linked to each other.”

The house’s entrance leads into a ground floor containing the rehearsal room and studio on one side of the central stair, with a compact lounge lined with bookshelves on the other.

The next level accommodates a pair of bedrooms positioned on either side of a storage unit. Opposite the sleeping areas is a row of storage cabinets along with the WC and sanitary spaces. 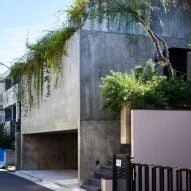 A second staircase ascends from the bedroom level to a bright, loft-like kitchen and living area. A third set of stairs that extends to touch the ceiling separates the space and provides a place to sit, eat, drink or read.

“The staircase can also be used as an extension of the floor, or as a counter that connects to chairs, shelves, tables, and the kitchen,” the architects suggested. “It has a dynamic functionality that always responds to the body.”

“By making a blind staircase towards the ceiling and walls, we aim to question the stereotype of the staircase which normally serves as a fixed purpose of only moving up and down,” they added.

The studio described the uppermost section of the staircase as a “terrace-like area” that offers the best views of the surrounding neighbourhood through windows on either side.

The stairs are finished with a textured surface made from a greenish-blue resin that distinguishes it from the wooden furniture and steel structural elements.

The same surface treatment is applied to the base mortar of the external elevations, which helps the building to blend in with the garden and the existing streetscape.

The textured walls already display a patina that makes the house appear as if it has been in situ for a long time. The surfaces will gradually change to enhance this sense of the building ageing and merging with its setting.

In Yanakacho, KACH wrapped translucent polycarbonate panels around the upper floor of a house to conceal its private areas.

The video is by Grafilm.