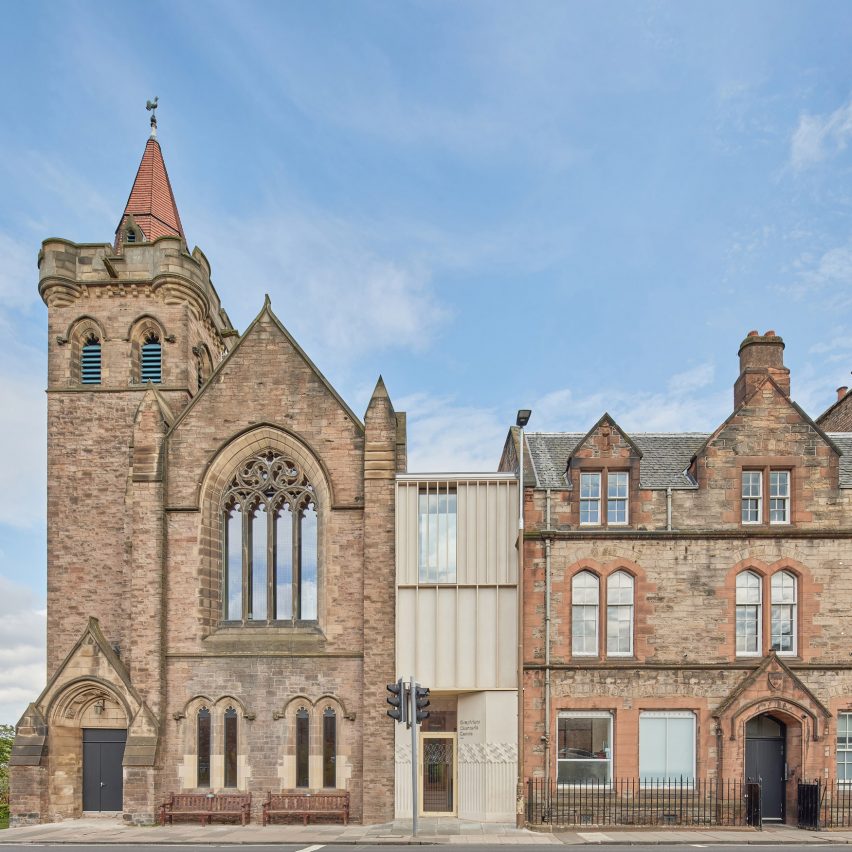 Timber cladding features in this church in Edinburgh, which has been converted into a community centre by Scottish architecture firm Konishi Gaffney.

The church was used a place of worship from its opening in 1912 until 2013, reopening in 2016 as the Greyfriars Charteris Centre. With its change of use came the need for an overhaul of its circulation and accessibility, as well as a clear point of entry.

Konishi Gaffney was challenged with transforming the perception of the church from a closed-off, imposing historic building to an inclusive space to be used by all members of the surrounding area’s diverse community.

The studio’s design aims to physically and aesthetically unify the collection of buildings that had been gradually acquired over time while being sensitive to the historic fabric of the buildings.

The structure was opened up at street level by extending the length of the existing lancet windows, allowing passers-by to see the activities going on inside and encourage participation.

A rational entryway was created by slotting a timber link building between the church and the neighbouring office building.

This is distinguished from the original stone buildings by its facade, which features terrazzo slabs on the ground floor level as a contemporary reference to the rusticated bases of the city’s Georgian buildings.

Higher up the frontage, overlaid grids of timber fins add a linear dimension to the terrazzo and, on the second floor, contain a floor-to-ceiling window.

The triple-height, top-lit atrium contains reception and lobby areas and houses a lift for easy access to all areas of the complex. 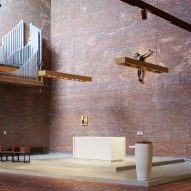 A wide staggered staircase with integrated seating allows users to sit and collaborate and connects the lower floor co-working areas with the lobby, as well as providing access to the main church hall above.

A six-metre-tall screen inserted into an existing pointed arch sections off the main hall from the ‘all faiths and none’ contemplation area above the stairway, which is lit by a large pointed arch window at the end of the space.

The Greyfriars Charteris Centre’s interior is unified by the use of American maple and birch plywood joinery combined with white plaster.

This neutral palette ties in with features of the existing structure, such as the main hall’s vaulted ceiling, which was stripped back to its original pine colour from a dark mahogany stain using a soda blasting technique.

The materials were chosen to keep the interior light and easy to navigate while tying in the new subdivided areas with the original building. Double glazing and new interior lighting was added throughout.

Improvements were also made to the building’s environmental performance, with insulation fitted throughout as well as the installation of a more efficient heating system, double glazing, low-energy LED lights and solar panels.

Other church conversions featured on Dezeen include a church in Los Angeles that was transformed into an events and co-working space by by Francesca de la Fuente and Working Holiday Studio, and a restaurant in London that sits inside a former church by Michaelis Boyd.

The photography is by Nanne Springer.