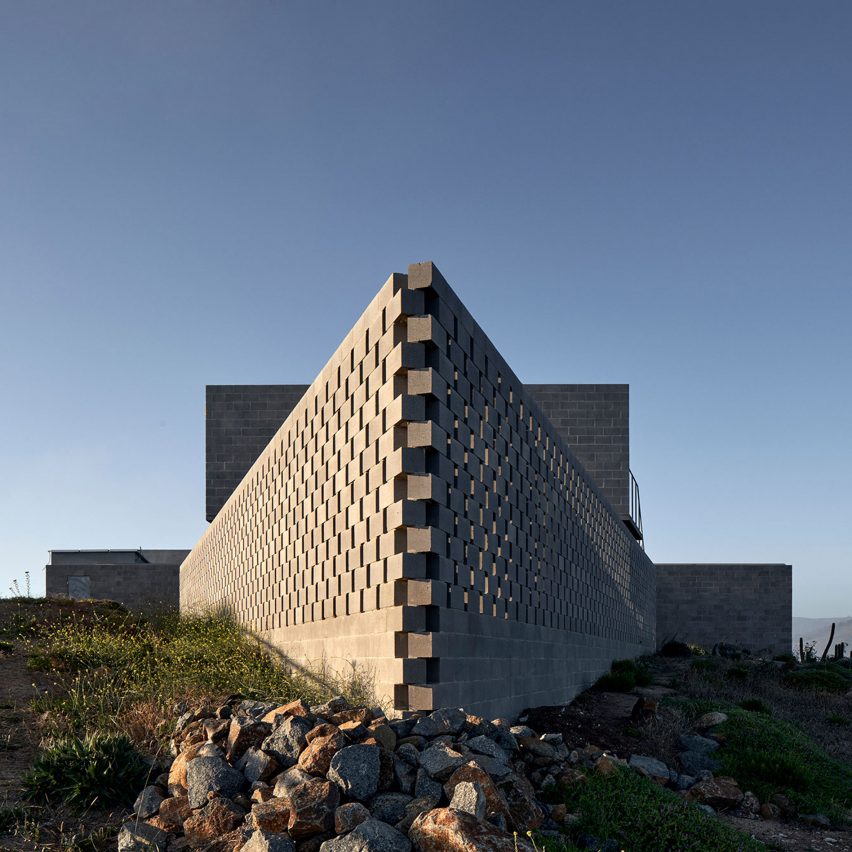 Umberto Bonomo and Felipe Alarcón have created a house with an exterior of cinder blocks, overlooking sweeping views of Chile’s rugged Pacific coastline.

The LBS house is located near Tunquén, in Chile’s Valparaiso region. This stretch of coastline is known for its remoteness, steep, rocky terrain and sweeping ocean views.

It was completed in 2020 by Chilean architects Umberto Bonomo and Felipe Alarcón. Because of the site’s relative isolation, the team opted to build the home out of cinder blocks, which offer the advantage of being modular and easy to transport.

“This artificial stone is a resistant structure, the aesthetic expression and economic response to the constructive and isolation challenges of the house,” the team explained.

The cinder block envelope stands out from the terrain.

“Granitic rocks of megalithic appearance contrast with the industrial, porous and neutral cement blocks,” they added.

A single footpath leads up a hill to the residence, which faces away from the road and is framed by two V-shaped walls at an acute angle, with openings that let some light and air through.

“These two walls are climatic devices arranged precisely on the site, to generate a constant calm inside the house,” said the designers.

These angular walls create a courtyard, which has a triangular swimming pool.

Two orthogonal volumes form the interior living spaces of the home. Near the courtyard is the kitchen, living and dining room, which features expansive, sliding openings that lead outside.

The kitchen is comprised of an oversized island that extends to form bar seating. Outside this room, a covered exterior kitchen allows the owners to expand their living space outdoors while still enjoying some protection from the elements.

“This environment opens completely to integrate into the outdoor patio contained by the V-wall,” the architects explained.

Two bedrooms are laid out parallel to the water present the best views of the coastline below.

Each bedroom is located at either end of a long corridor, and they are separated from one another by a central patio. 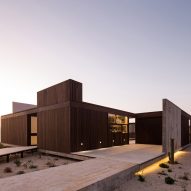 An exterior staircase leads up to a secondary wood-lined volume perched above the main portion of the home.

It opens out onto a terrace via sliding glass doors and has a secondary balcony off to the side, opposite the staircase.

The interior and exterior materials have a consistent palette, with exposed concrete structure, polished concrete floors and dark furnishings. “Raw matter is exposed to climate, seismic stresses and weather,” said the architects.

“This decision gives a monolithic and resounding appearance to the structure,” they added.

Other homes that line Chile’s dramatic coastline include a self-built home by architects Pablo Saric and Cristian Winckler, and a vacation residence by Ryue Nishizawa that is topped with a sculptural concrete roof.

The photography is by Cristóbal Palma.