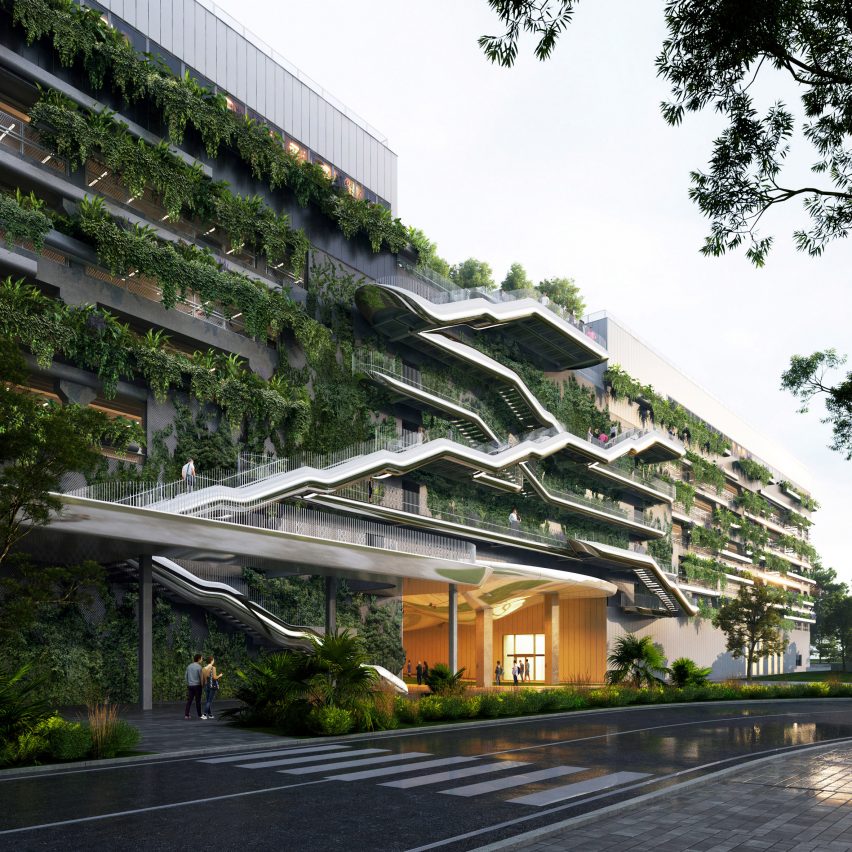 Plants and polished-metal staircases will animate the exterior of the MoLo entrance building and multi-storey car park that Chinese studio MAD is designing for a neighbourhood near Milan, Italy.

The MoLo, otherwise known as the Mobility and Logistic hub, will be built on the western boundary of the Milano Innovation District (MIND) – a neighbourhood dedicated to “cutting-edge scientific research and education, business, and leisure facilities”.

The 68,700-square-metre building is being designed by MAD with local architects Andrea Nonni and Open Project and engineering company Progec.

Set to begin construction in September, it will provide an educational space dedicated to mobility as well as a gateway and car park for visitors exploring the district.

“We has unveiled renderings of a monumental gateway complex,” the studio said.

“The MoLo was designed to perform as a welcoming entrance and education space for issues related to mobility in which visitors can drop off their cars to explore the district on foot and see innovative transportation technology in person.”

According to MAD, the MoLo seven-storey complex will measure 28.5 metres in height and 170 metres in length. It will incorporate a five-storey parking lot with a capacity of 1,500 cars. 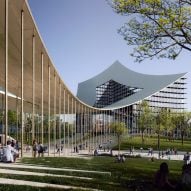 MoLo will be constructed with a prefabricated concrete frame. Externally it will feature photovoltaic panels on its upper levels that span over 8,000 square metres and will contribute renewable energy to the district.

There will also be a sculptural set of staircases finished in polished metal to provide access to these upper levels and to and from the car park.

Inside, the MoLo will include 3,000 square metres of commercial space on the ground floor, alongside laboratories, a supermarket and offices.

An open-ended corridor will dissect the ground floor and run through the centre of the building, sheltered by a cloud-like ceiling that will undulate overhead.

According to MAD, this corridor is intended to establish a connection to the nearby Rho-Arese park and “blur the boundary between indoor and outdoor”.

In another attempt to create a connection to the neighbouring park, the main elevations of the building will also feature vertical landscaping and greenery.

Elsewhere around Milan, BIG is currently developing a gateway building with a giant sweeping rooftop for CityLife, a district that features projects by the likes of Zaha Hadid Architects, Daniel Libeskind and Arata Isozaki.

OMA and Laboratorio Permanente are working on a masterplan involving the transformation of two abandoned goods yards into public parks.

Founded in Beijing in 2004, MAD is an architecture studio led by architect Ma Yansong. The studio is currently also developing a cluster of wooden museum buildings and a “futuristic” cruise terminal in China.