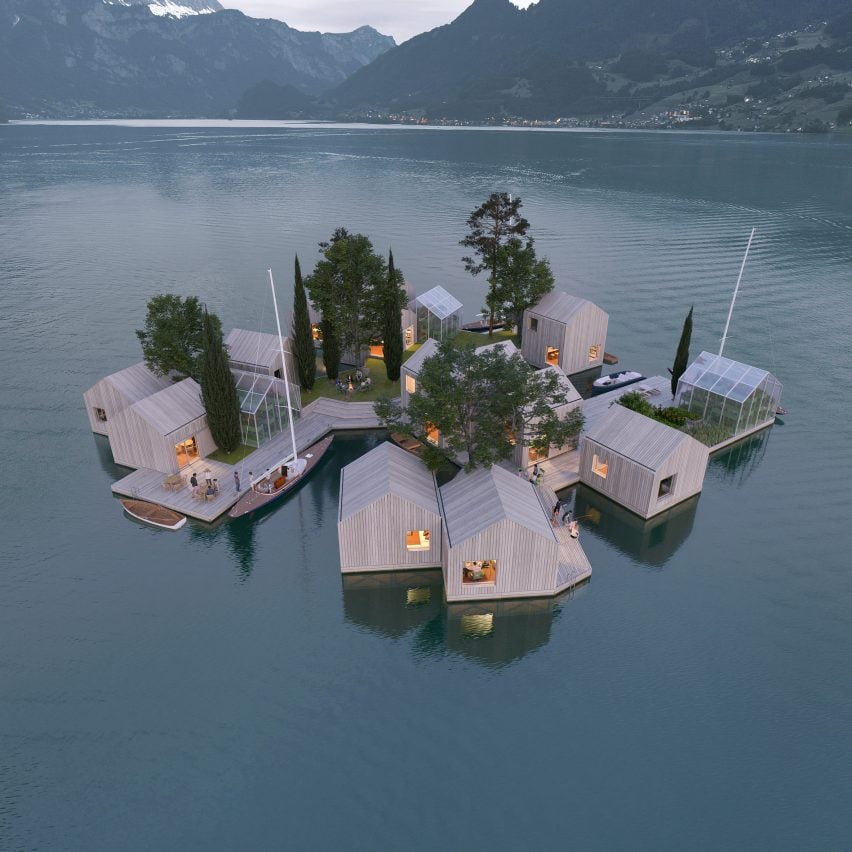 Danish maritime architecture studio MAST has developed Land on Water, a system for constructing floating buildings that aims to be more flexible and sustainable than traditional methods.

The system designed by Copenhagen-based MAST consists of modular containers that can be filled with various floatation elements, similar to how gabion cages are used in the construction industry.

Made from recycled reinforced plastic, these flat-pack modules could be easily transported around the world and assembled in different configurations to suit a range of building types.

“We think that a system like ours could, in the future, provide a way of organically developing large communities on water,” he told Dezeen.

The design has been developed with support from construction industry magnate Hubert Rhomberg and venture studio Fragile.

Land on Water offers a range of benefits when compared with typical systems on the market, which include plastic pontoons, steel pontoons or concrete foundations filled with polystyrene.

“Currently there are a lot of restrictions to what you can build on water,” said Blecher. “Each of the existing solutions has a lot of problems.”

Steel and concrete floats are difficult to transport and are often coated in toxic anti-fouling paints, while plastic floats can only be used for smaller structures, Blecher explained.

MAST’s system is designed to be filled with floatation material sourced locally.

Suggestions include recycled buoys and floats from the fishing industry, or old plastic bottles and containers. 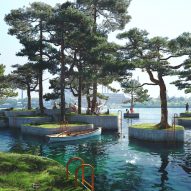 As well as making the floats easy to ship, this means they can potentially work with structures of various sizes and weights.

Another benefit is that the floatation material can be easily adjusted or added to if the building’s weight increases or the balance of weight changes.

Land on Water is also designed to promote biodiversity. Niches within the floats are expected to encourage the growth of molluscs and seaweed and provide habitats for fish and crustaceans.

“While steel and concrete are treated to prevent that sort of growth, these cages can act like bio-huts underwater,” said Blecher. “We hope it becomes a positive catalyst for life in the harbour.”

Blecher and Maarbjerg founded their studio after previously collaborating on Copenhagen Islands, a proposal for a “parkipelago” of floating islands.

Blecher, an Australian architect based in Copenhagen, also collaborates with architect Jan Henrik Jansen on traditional architecture projects such as Nieby Crofters Cottage, which is shortlisted for Dezeen Awards 2022.

With Land on Water, Blecher hopes to show that floating homes can be a flexible and attractive option for homeowners, and enable the creation of climate-resilient and biophilic communities.

Visualisation produced by MAST suggests the system could be used to build floating parks, cafes and swimming baths.

The project is intended to offer an alternative to large-scale visions for floating cities, such as the BIG-designed Oceanix City, which Blecher believes are fraught with issues.

“They repeat a lot of the mistakes that urban designers made in the 1930s, 40s, and 50s, when they designed megacities without much consideration of the small scale,” Blecher said.

MAST is currently developing a prototype of the Land on Water system, which it plans to present at the UIA World Congress of Architects taking place in Copenhagen in 2023.