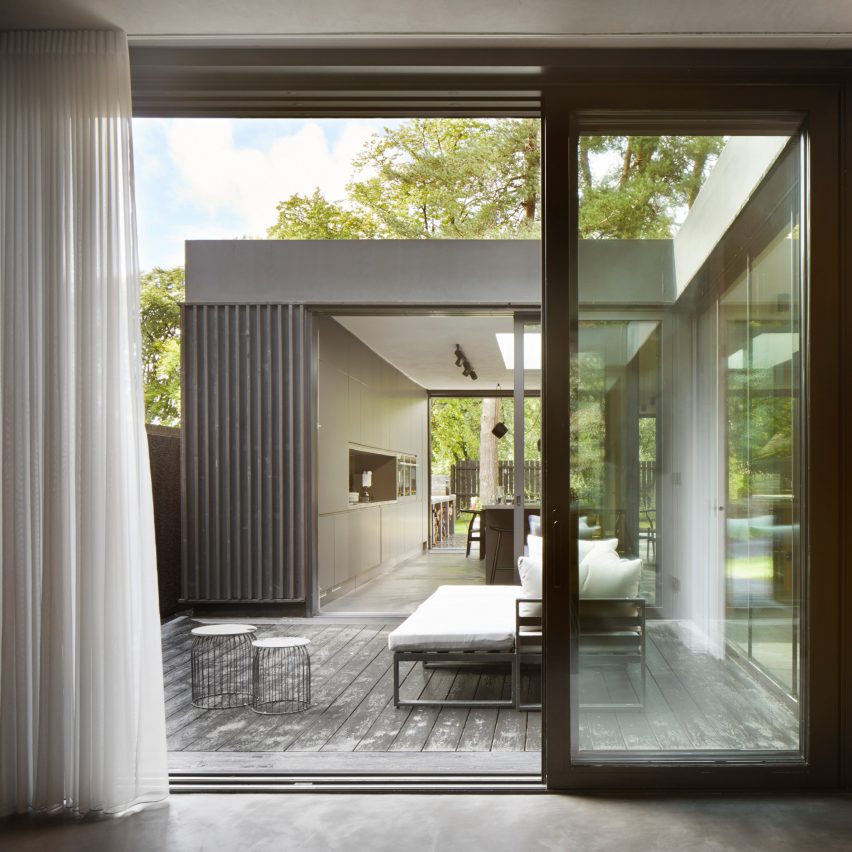 McGinlay Bell has completed a house in a leafy Glasgow suburb featuring a sequence of rooms arranged around compact courtyards that allow the natural surroundings to permeate indoors.

The owners of House in Bearsden approached McGinlay Bell to develop a new-build home on a plot of land that previously accommodated the neighbouring property’s tennis court.

The narrow rectilinear site sandwiched between existing houses presented several challenges, as it borders the road at the front and is lined on one side by tall pine trees that form a distinct perimeter.

The lack of a front garden prompted the architects to create a minimal brick wall defining the edge of the property, with space for car parking in front of a solid brick gable wall.

The brick wall ensures a bedroom on the ground floor is hidden from the road. The master bedroom above has large windows looking out towards the trees.

For House in Bearsden’s exterior, the architects specified materials to complement existing properties on the street, as well as using vertical slatted timber to echo the natural surroundings.

“In subtly referencing contextual elements such as bay windows and brick fenestration from the neighbouring suburban vernacular, the dwelling aims to provide a new and considered typology to the street,” the studio explained.

All of the bedrooms are contained within the two-storey brick volume towards the front of the site. The rest of the house is designed as an open-plan pavilion accommodating the main living areas alongside small pockets of outdoor space.

“As a practice we had been thinking quite a lot about cluster diagrams or using courtyards to define space,” practice director Brian McGinlay told Dezeen.

“The brief for this project talked about combining a bedroom block with living areas, so we separated the private quarters from the other spaces that sort of meander across the site.”

The single-storey pavilion contains a TV room facing the road, with the kitchen, dining area and living room located at the rear of the property.

The courtyards slotted in between the living spaces are lined with full-height glazed walls and sliding doors. They function as extensions to the internal floor area that provide additional space for entertaining family and friends.

“Given the narrow site with the trees forming a perimeter we wanted to find ways to bring light in and provide views of the trees,” McGinlay added.

“The idea of cutting out two primary courtyards from the rectilinear plan allows the internal rooms to blend with the outside and makes the spaces feel bigger.”

A key source of inspiration for the property’s open-plan layout was the efficient and adaptable designs of the Case Study Houses built in the United States following world war two.

The ideas of modernist architects, such as Adolf Loos and Ludwig Mies van Der Rohe, also inspired McGinlay Bell to use materials as decoration throughout the spaces rather than introducing additional ornamentation.

Bespoke walnut joinery including vanity dressers, a master closet and office desks are designed in direct response to the clients’ everyday needs and lifestyles.

The walnut screens bring a sense of warmth to the interior and cleverly conceal storage, home entertainment, a cocktail bar and the stairs leading to the bedrooms.

The wood grain is complemented throughout the building by a palette of premium materials including polished concrete floors and micro-cement plaster.

The use of materials in their natural or untreated state contributes to the house’s sustainably driven design. An air-source heat pump powered by photovoltaic panels provides the primary heat source, and high-spec glazing reduces heat loss whilst allowing for maximum solar gain.

Photography is by Jack Hobhouse.

The post McGinlay Bell uses courtyards to bring light and views into House in Bearsden appeared first on Dezeen.