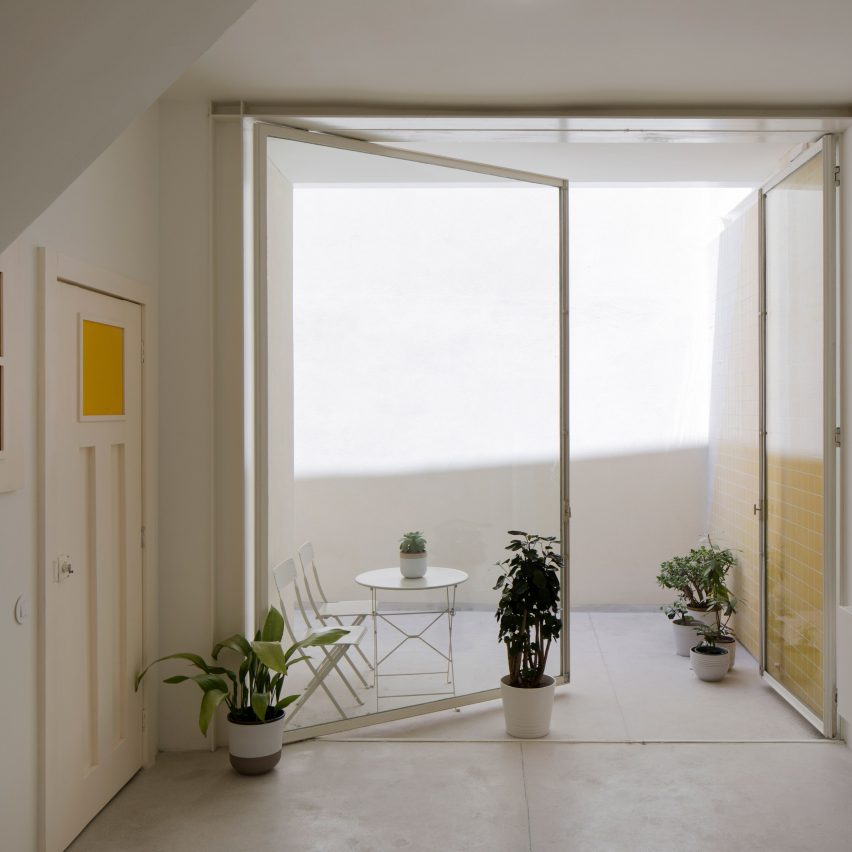 Casa da Beiramar is located in the historic neighbourhood of Beira-Mar with its colourful terraced houses. These have long, narrow floor plans and an adobe structure, meaning they are built from bricks made of earth and other organic materials.

Clad in traditional azulejos tiles and decorated with green ceramic flowerpots, the houses were originally built for the local fishing community.

“This part of the city has been witnessing an interesting fusion between the old dwellers and more recent inhabitants,” explained Merooficina founders Catarina Ribeiro and Vitório Leite.

The studio was commissioned by one of these new residents to restore a two-storey, 150-square-metre adobe house, which sits on a corner plot with two street-facing facades.

The client asked Merooficina to create a flexible design that would allow the building to be used in multiple different ways – initially as two apartments but with a longterm view of converting it back into a single house or an office for the owner’s new psychology practice.

“We understand flexibility as a way to enrich ageing buildings,” said the studio. “It’s a matter of adding and layering possibilities on a specific place, so the new occupation can be multiple and transformative.”

Using the house’s two existing entrances, the studio was able to create two separate apartments – one on each floor of the building. The first-floor apartment can be reached via a bright blue stairwell, while the ground-floor apartment is accessed directly from the street.

A door that connects the two apartments at the bottom of the stairwell has been temporarily closed off but yellow panes of glass help to funnel light into the stairwell.

The studio restored and reinforced the existing adobe walls and floors to improve the apartments’ thermal and acoustic insulation. Original windows, doors and other structural and ornamental elements were retained as much as possible.

The biggest intervention was the addition of a new steel structure, which allowed the back of the building to be opened up. Here, the previous owners had added a haphazard extension using ceramic bricks and steel sheets, covering what used to be a patio.

This structure was demolished to return the space to its former use, while pivot windows were added to open up the ground floor apartment to the outdoor space.

The patio walls are clad in a gradient of yellow tiles that were painted by a local artist, in a homage to Aveiro’s long history of tile production.

The patio connects to an open-plan living and dining area and a kitchen, which features matching yellow tiles, marble countertops and birch plywood cupboards.

From the kitchen, a mirrored door leads to the bathroom, bedroom and kitchen.

A glazed balcony was added above the new patio on the first floor, which houses a bathroom and a bathtub enrobed in a white curtain to create a barrier between the bather and the busy street.

“We wanted to mix and match the ambiences of both apartments using the tiles and other details, but they are quite different,” Ribeiro told Dezeen.

“In the upstairs apartment, we tried to retain all of the existing features, such as the windows and wood detailing – adding only the glazed balcony in the bathroom and a new kitchen. Downstairs, however, was in a very bad state when we began the project. So here we used a cleaner, more minimal design language and organisation.”

In the upstairs kitchen, the architects restored the original tiles, brown rose plaster and marble as well as replacing the pinewood flooring.

Whenever the owners want to convert the property back into a single dwelling, the apartments can easily be connected via the door at the bottom of the stairwell while the kitchen on the first floor could be converted into an additional bedroom.

Alternatively, the downstairs entrance, bathroom and bedroom could be closed off from the kitchen and living room and turned into an office for the owner’s work as a psychologist.

“The mixture between the new interventions and the existing, recovered features is a liquid blend between two ways of building,” explained the architects. “One more universal – related to the new habits and comfort demands of the new inhabitants – and the other more vernacular, related to the place, the existing building and the local culture.”

In Spain, Iterare Arquitectos used traditional construction techniques and local materials to update a 100-year-old home in a former fisherman’s neighbourhood in Valencia. The minimalist interior is designed to blend in with its historical surroundings.

Photography is by Tiago Casanova.