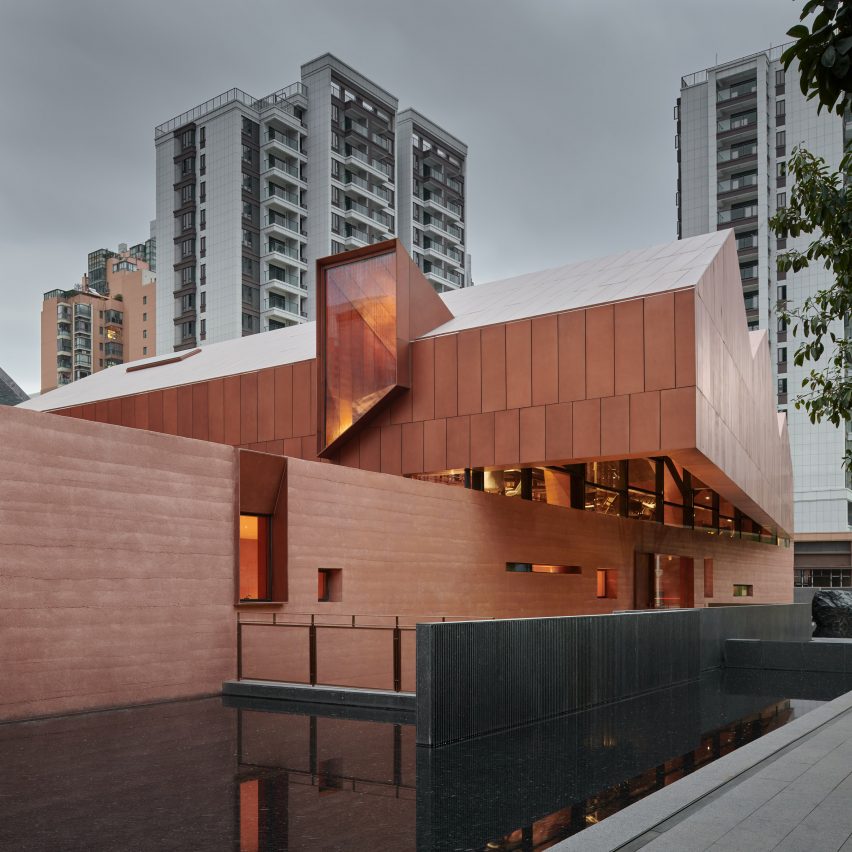 An ornate wooden structure dating back to the Qing dynasty has been encased in a copper-clad shell to create The Relic Shelter, a teahouse in Fuzhou, China, by Neri&Hu.

The Relic Shelter was designed by the Shanghai-based studio to draw attention to the threat that modern developments pose to traditional architecture and treats the historic building at its centre as an “urban artefact.”

Relocated from its original site in Jiangnan, the wooden structure now frames an atmospheric tea lounge, surrounded by a series of private and public lounges, event spaces and bars finished in rough, earth-coloured concrete, plaster and copper.

“Conceived as an urban artefact and drawing from the historical roots of the city of Fuzhou, the teahouse internalises a piece of distinct heritage at a time when rapid new development has eroded traditional culture and identity,” explained the practice.

“For this ancient building aspiring to be reborn as a modern tea house, the team adopted architectural strategies that could enhance its new function,” it continued.

Raised on a rammed-concrete podium, The Relic Shelter is topped by a copper-clad roof, with its pitch angled to match that of the original wooden building inside. The building has been shortlisted in the hospitality building category of Dezeen Awards 2022.

Visitors enter into the concrete base, where a circular arrival lobby leads to office spaces and a wine and tea cellar that opens onto a sunken garden at the rear of the building.

On the first floor, a display area and tea lounge sit beneath the historic wooden structure to the east, while a function room sits on the opposite side of a shallow circular pool of water above the entrance lobby with a skylight at its centre. 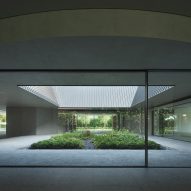 Neri&Hu arranges House of Remembrance around a central memorial garden

On the second floor, a balcony with seating surrounds the historic wooden structure below, giving visitors the chance to view it from above.

Skylights and a thin, glazed gap between the base and the roof illuminate this level, creating a variety of bright, open areas and smaller, more intimate private tea rooms around the edges of the central space.

“A series of contrasts play out among elements that are bright and dark, light and heavy, coarse and refined, as visitors enter the grand hall where the structure of the ancient residence is situated,” said the practice.

“Sky wells penetrate the roof, bringing natural light into the depths of the enclosure and illuminating the priceless artefact on display…only upon reading the mezzanine does the structural configuration of the building begin to reveal itself,” it continued.

Architects Lyndon Neri and Rosanna Hu founded Neri&Hu in 2004, and often adopt a context-led approach. Recent projects include a home in Singapore that drew on the arrangement of traditional courtyard dwellings for its design.

Other projects that have been shortlisted in the hospitality category of Dezeen Awards 2022 include a restaurant at a resort in India by Play Architecture that is topped by an undulating, vaulted tile roof.

Photography is by Chen Hao.