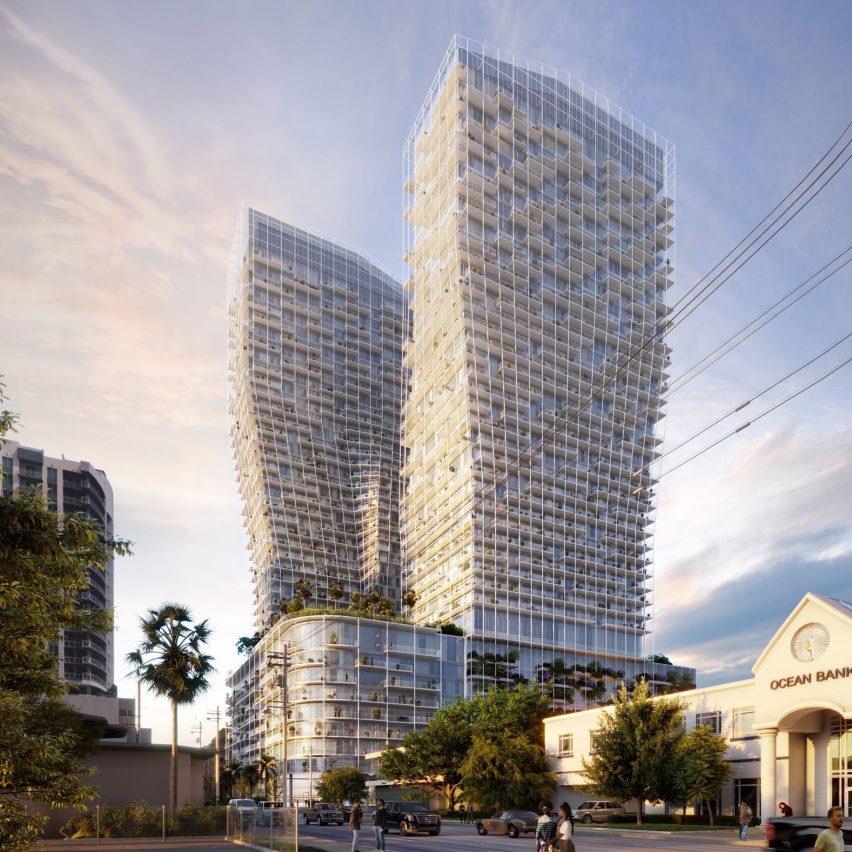 Architecture studio ODA has unveiled its design for the two-skyscraper Ombelle development in Fort Lauderdale, Florida, which will be wrapped in a steel grid described by the architects as an exoskeleton.

The Ombelle development will consist of a wide base with two tapered towers of the same height extended from it surrounded by balconies supported on the external steel structure.

ODA designed the structure for Flagler Village, an area in the northeast of the city that was once mostly industrial, but is now home to numerous art galleries and residential blocks.

The housing block will have 1,100 residential units spread out over a base pavilion and the two 43-storey towers. It will become one of the tallest buildings in the Florida city, where the current tallest building has 45 storeys.

Both of the skyscrapers will be rise from a base that at street level is surrounded by columns. At key points, the base will be recessed from the street, creating covered plazas.

The ground floor will have more than 10,000 square feet (930 square metres) of commercial space.

Above the ground floor will be apartments and on top of the base itself will be a green area that will serve as a terrace for the inhabitants of the structures.

From this terrace, the two towers will taper skywards. The tapering appears to happen from different angles. First, an additional horizontal element that steps out from the base of the tower tapers up to a uniform middle, and then the towers are skewed from another side.

This sculptural flow of the structure gives it an almost accordion-like appearance, added to by the “exoskeleton” of metal beams that runs outside of the glass facades.

“The striking facade is made up of a delicate exoskeleton with an outer shell of terraces and balconies varying in depth, length and density to create a feeling of individual identity between homes,” explained ODA.

The announcement of this Fort Lauderdale scheme comes on the heels of another sculptural tower announced by ODA late last year named the Broward Tower.

“We are thrilled to be part of Fort Lauderdale’s transformation into a robust forward-thinking city and international destination,” said Eran Chen, founder and executive of ODA.

“With the carefully thought-out masterplan that is being implemented, the city is embracing change.” 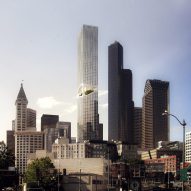 Broward Tower will be more self-consciously sculptural with a bridge connecting two towers. The massing sits on top of one of the towers while it angles down to integrate with the other.

The facades of the structure will be covered in terraces and have a window wall system across the building’s 48 storeys. On the underside of the angled massing, there will be stucco paneling.

If completed, it will be the tallest structure in Fort Lauderdale.

ODA was founded in 2007 in New York and is known for highly conceptual design schemes. Last year, the studio proposed a rezoning plan for New York City that would allow developers to build higher granted space was allocated at ground level for the public.

Other designs put forward by ODA include a sculptural tower in Seattle that would be split in two at the middle in order to create a void for a high-elevation park.