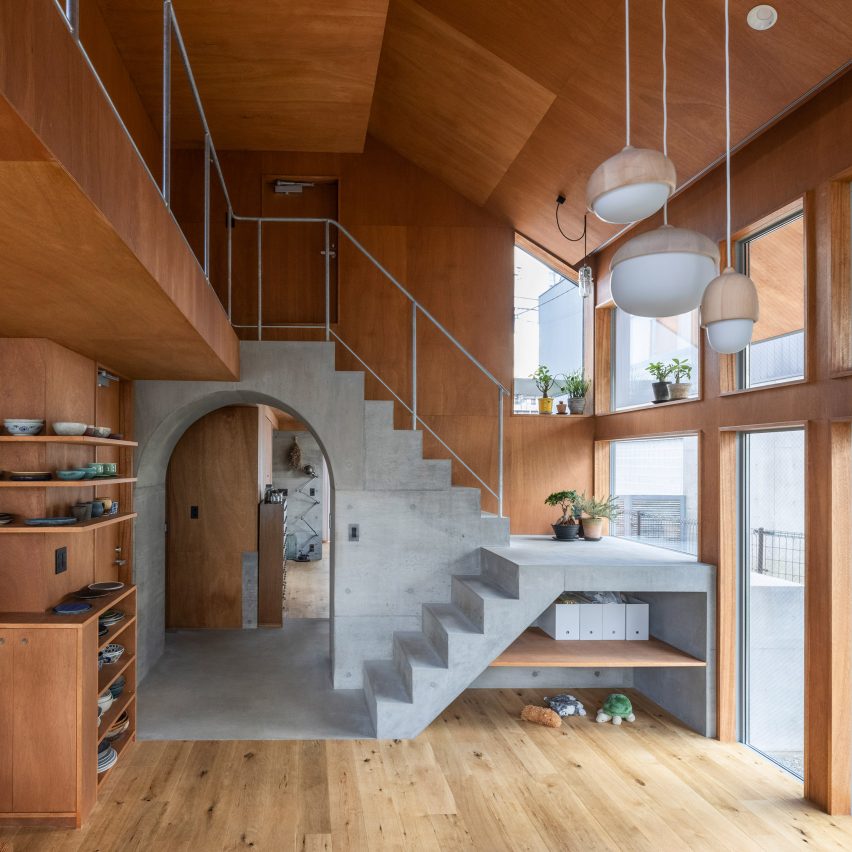 Japanese architecture studio Office M-SA has arranged a house in Akishima, Tokyo, around a series of exposed concrete elements designed as extensions of its foundations.

The permanent concrete forms act as anchor points for the home’s timber-framed walls, which are designed to be easily extended or altered in the future, allowing the client to adapt the interior to their needs.

“We designed a house where the concrete foundation can divide the space by standing up on the site as furniture to trigger a place to stay,” explained Office M-SA co-founder Meiri Shinohara.

“[The] concrete structure might keep standing there for a hundred years, [and] the timber structure could be extended or demolished in a couple of years,” he continued.

Appearing throughout the interior and exterior of the home, the concrete elements form everything from a covered bike shelter and staircases to a fireplace, tables, bookshelves and planters.

They were placed by Office M-SA to give each compact room a sense of function or purpose, which could then be reinterpreted by the residents.

The house comprises two rendered, mono-pitch forms, loosely divided by two concrete stair forms. One stair runs over an arched opening to connect the home’s two floors, while the other leads from the surrounding patio up to a rooftop terrace.

A double-height living and dining area occupies the north side of the home, with large windows overlooking the patio and the concrete stair leading to a balcony and a bedroom above. 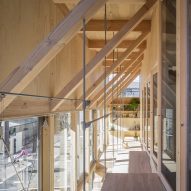 Staircase is a social space in Tokyo house by Kiri Architects

To the south, a study and bathroom are organised alongside four more bedrooms that open onto the wood-decked roof terrace.

“The layout of the concrete objects was decided depending on use, such as cooking, reading, passing through or switching the scene,” explained Shinohara.

“It is assumed that the rooms that are vaguely connected will change their function due to daily changes and changes over the years,” Shinohara added.

“I hope someone would use the space in an unexpected way which is against what we originally planned.”

Inside, the home is lined with wooden panels that contrast the exposed concrete. The same wood is used to create shelving and cabinets, with other areas of storage concealed in portions of the concrete structures.

Other residential projects recently completed in Tokyo include a home by Kiri Architects with a large staircase at its centre designed as a social space and a dwelling by Apollo Architects & Associates organised around hidden courtyards.

The photography is by Kazuhisa Kota.