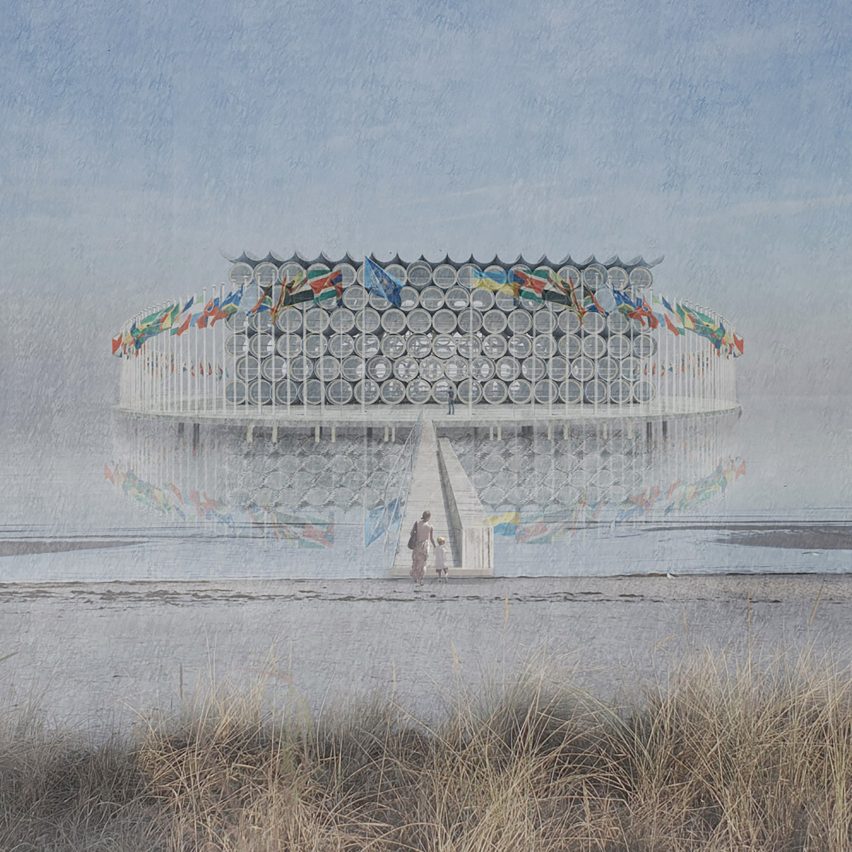 German architecture studio Opposite Office has proposed repurposing the Nord Stream 2 gas pipeline between Russia and Germany into a site of international cooperation with its own capsule hotel named Nord Stream 3.

The concept turns the pipeline’s German landing station into a “UN for ordinary people”, where randomly chosen representatives of the worlds’ nations would eat, sleep, meet and socialise.

The facilities would be entirely built from materials that are part of Nord Stream 2 project,  including the pipes – 400 metres of which would be turned into sleeping pods within a dormitory-like capsule hotel.

Opposite Office, which is known for its provocative speculative architecture concepts, said it designed Nord Stream 3 to encourage European countries to end their reliance on Russian fossil fuels.

“Europe is discussing whether we can afford to shut off Russian gas,” said Opposite Office founder Benedikt Hartl. “We are already going one step further and have thought about how Nord Stream, the gas pipeline between Europe and Russia, could be converted once it is no longer used.”

In their project statement, the studio said that the closure of the Nord Stream pipelines was overdue following Russia’s annexation of Crimea and its invasion of Ukraine.

“Despite [Russian president] Putin’s great power fantasies, the annexation of Crimea and the poisoning and imprisonment of Kremlin critic Alexei Navalny, German economy and politics stuck to the project,” said Opposite Office.

“After Russia’s invasion of Ukraine, which violated international law, the West relied on sanctions. In order to become independent of autocratic states in the long-term and to implement the energy transition to renewable energies in Germany, it is important that Nord Stream is stopped completely.”

The Nord Stream 3 proposal is focused on the pipeline’s German landing station in the coastal resort of Lubmin.

It suggests turning those facilities into a foreign language school, assembly hall and viewing platform. They would connect via a “walk of freedom” to the Nord Stream 3 headquarters and capsule hotel, newly built from the pipes that would be dug out of the seabed.

“In a way, it looks quite brutal, but it is a recycling project, so that the ecological impact in terms of carbon dioxide and grey energy is as little as possible,” Opposite Office founder Benedikt Hartl told Dezeen.

The pipes are 1.153 metres in diameter, making them a comfortable size for a sleeping pod, similar to the micro-suites that make up trendy capsule hotels.

Opposite Office’s proposal contains almost 200 pods – one for every country in the world to send one person, who would be chosen at random and occupy the space for free for a month-long residency.

The studio said it chose to focus its transformation of Nord Stream 2 on intercultural exchange because “only international cooperation and international relations will secure long-term peace”.

“In the discussion of climate, social, health and economic policy issues, the participants bring their ideas, values ​​and maxims for action, negotiate them at equals and thus bring new implications, inspiration and impulses to their countries of origin,” said Opposite Office.

“At the level of civil society, transformations can be made possible and shaped from below, supported by an international, multicultural process of exchange, networking and cooperation,” the studio continued.

“Instead of a gathering of top diplomats and heads of states at the United Nations, a general assembly of the common people, the citizens of this world, is meeting at Nord Stream 3.”

The Nord Stream natural gas pipelines run under the Baltic Sea from Russia to Germany and have long been controversial because they are seen as making Europe more reliant on Russia for its energy.

Nord Stream 2 was completed, but not yet operational before Russia’s invasion of Ukraine. Since then, German chancellor Olaf Scholz suspended its approval and the United States imposed sanctions on the company, leading it to file for bankruptcy on 1 March 2022.

Opposite Office considers itself an activist practice that likes to make architectural contributions to political discussions.

Recently, its concepts have included turning the US Capitol into a fortress, converting Berlin’s Brandenberg Airport into a superhospital, and redesigning Buckingham Palace as a co-living space for 50,000 Londoners.