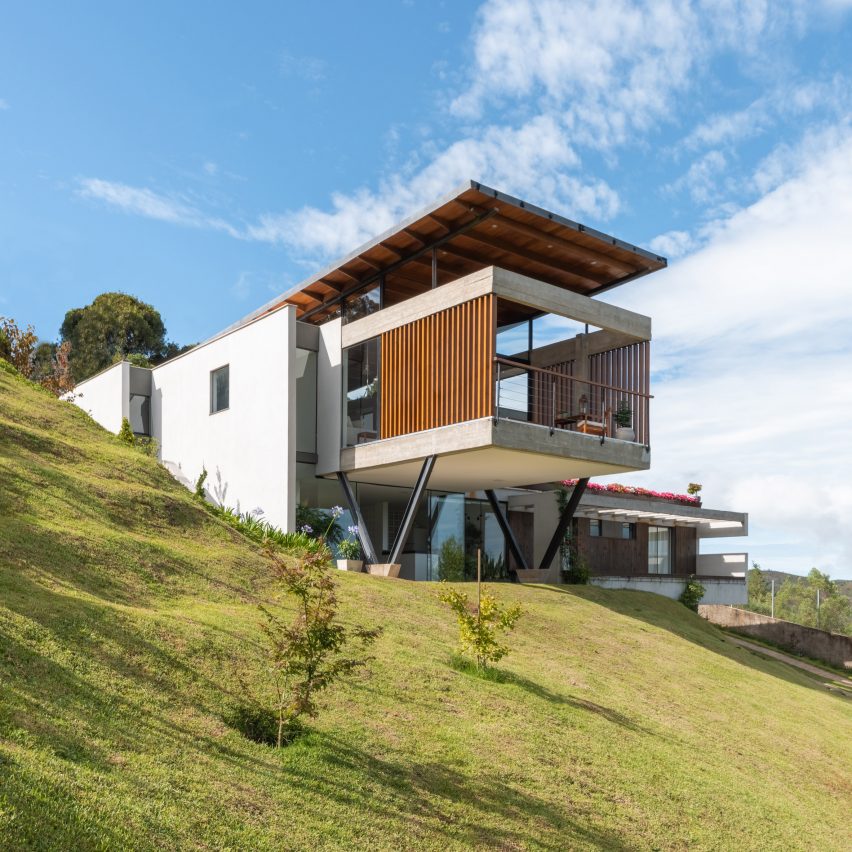 OTP Arquitetura has completed a multigenerational house perched on a steep site in Brazil’s Mantiqueira mountain range for a couple and their two sons.

The TKN house was designed for an extended family to share certain living spaces, while still maintaining privacy between various family members.

It is located in Campos de Jordão, a mountainous region in the state of São Paulo.

“Set in one of the highest altitudes in Campos do Jordão, the TKN residence was oriented to face the great view that the site offers from the top of the city,” said OTP Arquitetura in a project description.

Accessed from the rear, the main entrance to the home is on the upper level, which is where the parents’ living quarters are laid out.

The long leg of this L-shaped volume contains the family’s kitchen, living and dining area in an open configuration.

Resting on two sets of steel columns, this space projects out into the landscape, offering panoramic views of the surrounding mountains through floor-to-ceiling windows. At the end, a covered porch is partially protected by vertical wooden slats.

Underneath this volume is a secondary terrace, which is mainly used by the downstairs residents.

The owners’ bedroom and en-suite bathroom is in a small adjacent volume, and accessed via a hallway. Their quarters are bordered on two sides by a large terrace, which they share with their sons that live downstairs.

“The kitchen and the dining room are integrated with the main room based on the resident’s lifestyle,” explained OTP Arquitetura.

An interior staircase leads to the lower level, where there are two bedrooms, each with their own bathroom, and a secondary living and dining room. Having a separate kitchen also allows the family to have their meals independently as needed.

Throughout the home, rich wooden surfaces contrast the building’s structural concrete construction. Besides these accents, the home’s finishes were kept to a simple palette.

OTP Arquitetura is headed by Arthur Oishi, Raphael Takano and Pedro Prado. The studio, which was established in 2013, is based in São Paulo, roughly 125 miles from Campos de Jordão.

Other recently completed projects in Brazil include an A-frame cabin deep in the rainforest by Atelier Marko Brajovic and a simple pavilion for fishermen on Jaguanum Island.

The photography is by Guilherme Pucci.