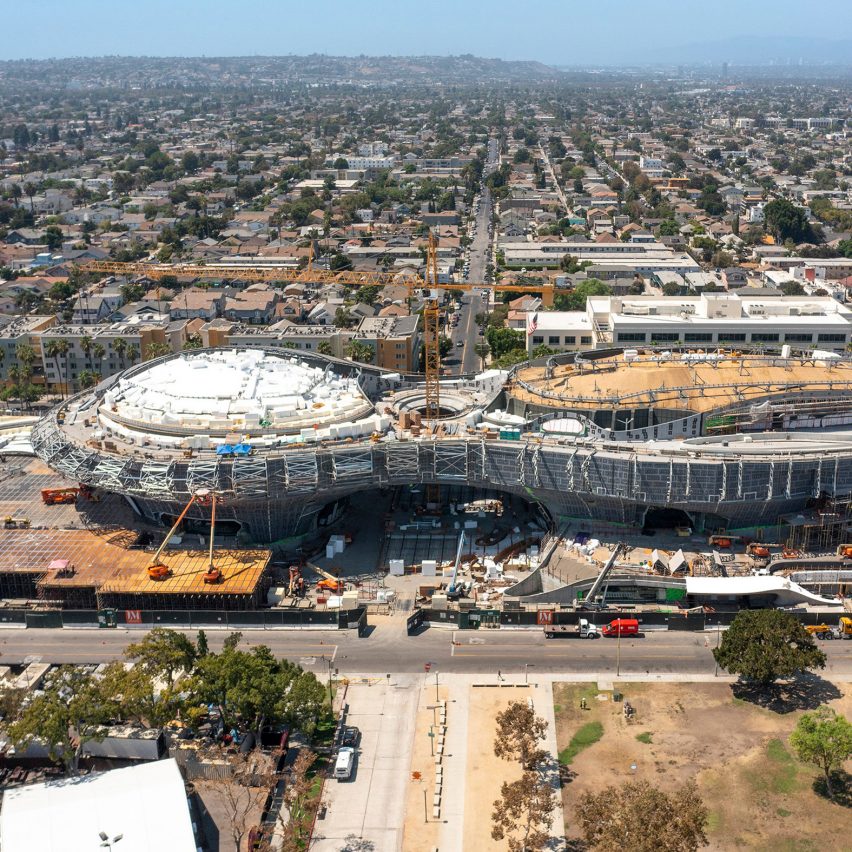 The Lucas Museum of Narrative Art has released images of its MAD-designed home under construction in Los Angeles and announced an opening date of 2025.

Under construction alongside the LA Memorial Coliseum stadium in Exposition Park, the five-story building will be home to the Lucas Museum of Narrative Art when it completes.

Designed by Chinese studio MAD with international studio Stantec acting as executive architect, the building’s elongated, organic form can be seen taking shape in the photos released by the institution.

According to the studio, the building’s form was informed by the trees in the surrounding park, with its edges raised above the ground to create shaded areas.

To give the building its sinuous finish, the steel frame will be clad in 1,500 curved fibreglass-reinforced polymer (FRP) panels that will all have a unique shape.

Installation of the panels has begun on the lower levels of the building’s south facade. 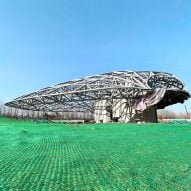 The 300,000-square-foot (28,000 square metre) building is being built to host a museum dedicated to narrative art.

It will contain spaces dedicated to the work of filmmaker and Star Wars creator George Lucas and artwork and memorabilia owned by Lucas and his wife Mellody Hobson.

“We believe that narrative art can connect us and help shape a more just society,” said Lucas Museum of Narrative Art director Sandra Jackson-Dumont. “As a result, every element of this institution contributes to that idea — the site is one physical manifestation of that.”

“The campus with its iconic building and arched belly that creates a canopy, coupled with the 200-plus trees taking root in the park, together create another community gathering place with much-needed shade for our neighbors and others who will use the site,” continued Jackson-Dumont.

Despite the external form looking largely complete, the museum announced that it was planning to open its doors to the public in 2025, over a decade after Lucas initially announced plans for the institution.

The building was originally proposed for Chicago, with MAD and Studio Gang hired in 2014. However, after the building created controversy due to its site and size, Lucas abandoned the plans in favour of a Califonia location.

MAD drew up plans for museums in San Francisco and Los Angeles, with Lucas settling on a Los Angeles location and the building being approved in 2017. Construction began in 2018, when the museum was scheduled to open in 2021.

The photography is by Sand Hill Media/Eric Furie, unless otherwise stated.