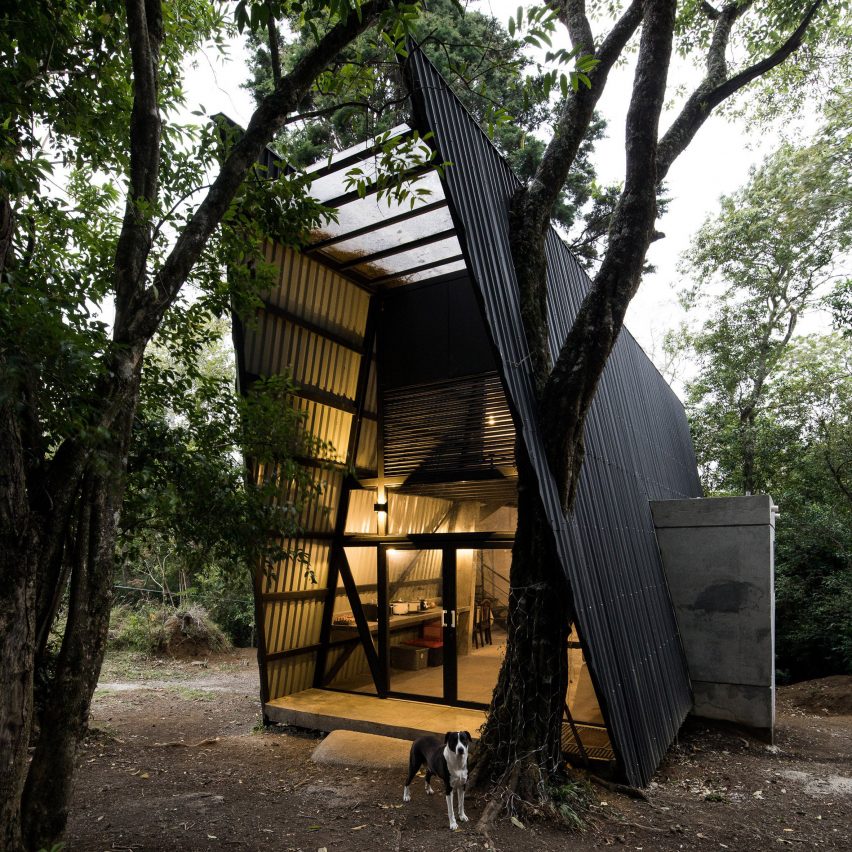 Costa Rica studio Plup! has completed a pair of structures topped with dramatic skylights on the slopes of the Barva Volcano using inexpensive materials.

The series of structures were completed in 2021 in San Jose, the capital of Costa Rica. The area’s climate is extremely damp, which led the studio to favour a design that would easily shed water.

“The area is an area that presents rain or at least constant spray during the year, with an average temperature of 17C and high humidity,” explained local studio Plup!.

The retreat is made up of two similar, longitudinal buildings. One of them is exclusively for hosting guests and offers an expansive, double-height living and dining room.

The other one contains a mezzanine for the owner and guest bedrooms on the lower level, and also enjoys a kitchen, living and dining room on the main level. Both buildings are made up of two angled walls that join at their apex to form skylights.

Because of this sloped shape, the studio claimed that the buildings are constantly draining water off their sides.

“A simple and low-cost structures generate space from two planes that function as a wall and ceiling at the same time, allowing a quick evacuation of water and any other element that comes off,” the architecture studio explained.

Conceptually, the design was inspired by Bromeliads, a species of native plants that are shaped to collect water within their leaf structure to store for later use.

“The building, instead of storing water, seeks to reject it to generate shelter and comfort,” said Plup!.

An open-concept floor plan features on the ground floor of both structures, with large openings at either end of the narrow buildings that provide cross-ventilation of the interiors.

The kitchen and living room are at opposite ends of each space, with a long dining table placed in between to offer an informal separation of the spaces. 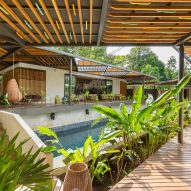 Just off the living room is an elevated terrace, which is sheltered on three sides and allows residents to peer out at the surrounding tree tops.

Two concrete cores in the centre of the structures contain bathrooms staircases, respectively. These act as supports for the rest of the building, which the architects say reduces any disturbance to the site.

In good weather, the skylights can be opened, which further helps natural ventilation and reduces humidity in the interiors.

“The use of low-maintenance materials will allow the project to mature in conjunction with its context,” the studio explained.

The studio is led by architect Carlos Andres Bolaños Alfaro and based in the Rohrmoser neighbourhood of San Jose, the capital city of Costa Rica.

Other projects in Costa Rica include a jungle home by Studio Saxe that opens fully onto its lush surroundings and a prefabricated home by studio A-01 that was built as a prototype for future modular construction.

The photography is by Roberto d´Ambrosio S.