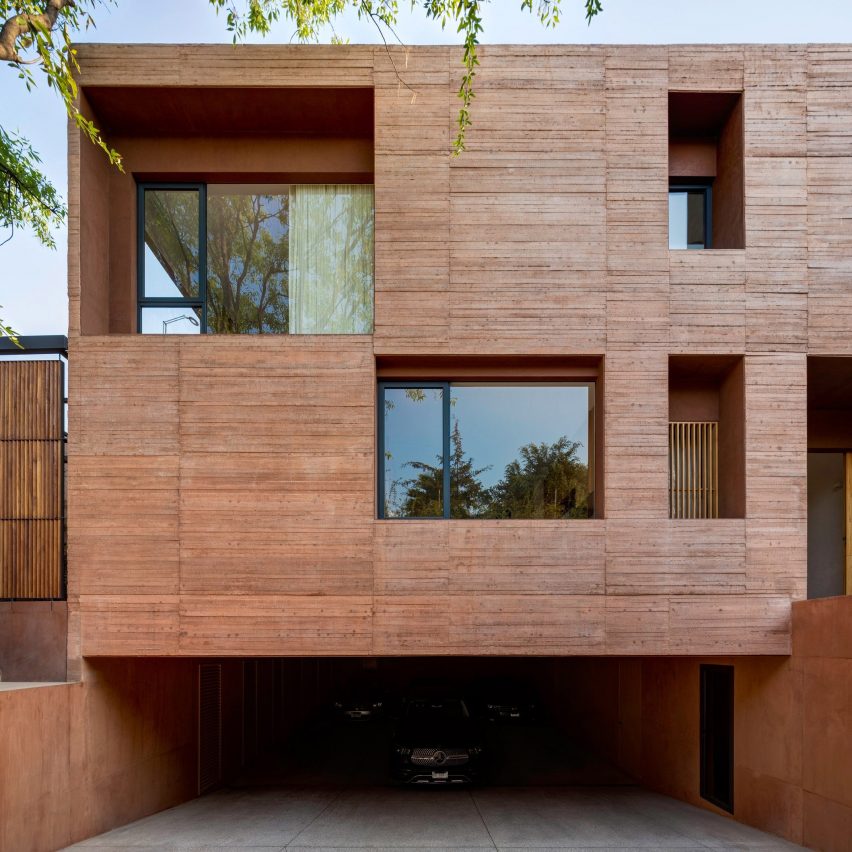 Courtyards, walkways, and staircases delineate the volumes of this home in Mexico City designed by local studio PPAA.

The project is named after the street it was built on, Monte Tauro, in the high-end Lomas de Chapultepec neighbourhood.

The area is an established residential enclave that lies west of the Bosque de Chapultepec, one of the city’s main parks.

However, the primary communal space has a wooden frame that contrasts the concrete of the overall envelope.

The wooden spaces are in the middle of the house and wrapped by the concrete ones.

“The program was separated and arranged based on three circulation axes on the ground floor, dividing the public axis, the service axis, and a bedroom block,” the architect studio explained.

“This architectural approach aims to separate these three blocks in proportional volume and section, in order to make noticeable that every block serves a different purpose for the project,” the studio added.

The main entrance to the home from street level leads guests into a lobby at the intersection of the legs of the L-shaped floor plan.

At the side of the home is a secondary terrace, with steps leading down to the lower level and the garage.

The site has neighbours on three sides and a street on another, so the architecture studio opted to create this small courtyard with a light well to bring light to the cellar.

In total, the 645 square-metre home has four bedrooms, including a bedroom for the domestic workers employed by the owners.

The ground floor counts a dine-in kitchen, a media room, a living room and a bedroom within the home’s private areas.

A small staircase leads to a standalone suite on the top floor, which overlooks both the garden and the street.

The residents also enjoy several amenities on the lower level, including a home gym, bicycle repair workshop and wine cellar. Within the home’s communal area, the ceilings are much taller. A small gap between this wooden structural frame and the rest of the house reinforces its distinct use and character.

Here, PPAA included plenty of space for sharing family meals or hosting, as well as a generous outdoor seating area.

Two large glass doors open up to an exterior terrace.

PPAA used a soothing interior palette that complements the rough concrete of the home’s exterior. The finishes include wooden floors, white walls and neutral textiles.

Other projects completed by the Mexico City-based firm range in scale from a stone cottage for two brothers “in the middle of nowhere” to a block of holiday apartments in Tulum topped by rooftop pools.

The photography is by Rafael Gamo unless otherwise indicated.