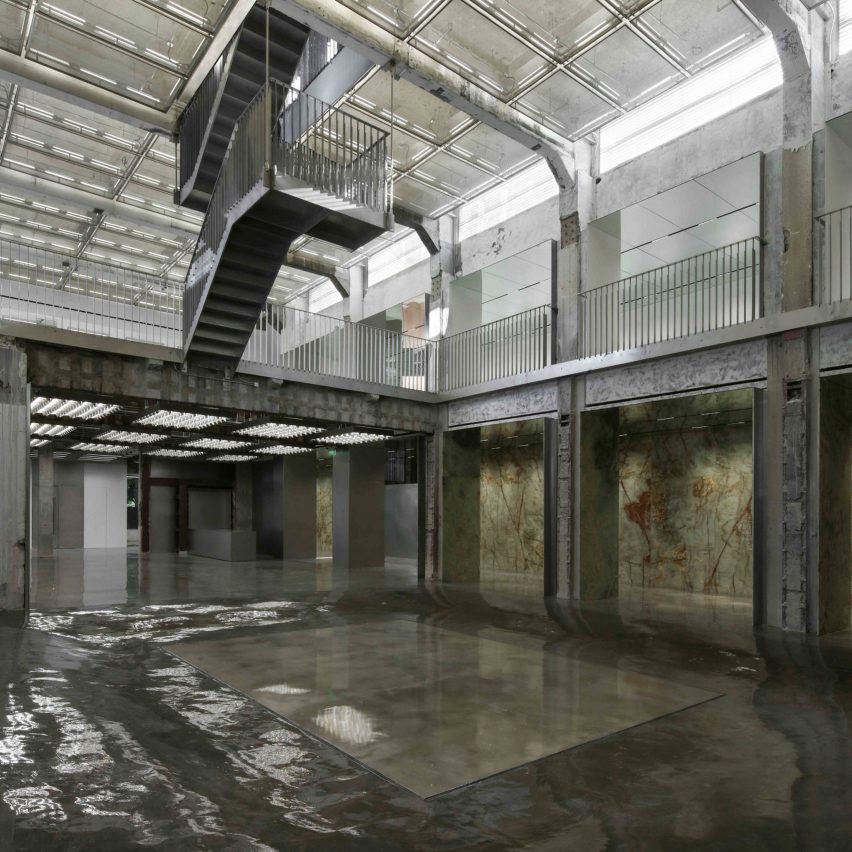 Chinese studio Dongqi Design has turned a disused factory in Shanghai into a multi-brand fashion and lifestyle store, adding glossy marble and metal surfaces to offset its exposed concrete shell.

Set across three floors, the XC273 retail space houses designer showrooms and pop-ups alongside a small cafe, as well as providing spaces for temporary exhibitions and events.

Formerly a state-owned towel factory, the building had already been changed several times before the latest round of renovations.

Dongqi Design strived to preserve and emphasise these different layers of history, which are contrasted against shiny new finishes to create a kind of “nostalgic futurism”.

“All the differences of the space were kept as part of the building’s history so that people walking in could feel that the boundaries between the past and the present are blurred, as if they had walked into a timeless space,” the studio explained.

The building is organised around three voids, which now form the basis of the store’s circulation routes.

The largest of these voids consists of a double-height space at the core of the building, where Dongqi Design added a small reflecting pool surrounded by a collonade.

The collonade’s raw concrete columns are left exposed where they face the pond, while their other three sides are wrapped with either marble, wood or metal.

This approach is replicated across the store’s display fixtures to create a sense of spatial continuity. It can also be seen on the first floor, where new paving was added to enhance the existing geometric flooring. 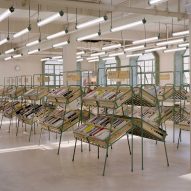 A sound tunnel that provides visitors with an experimental music experience was placed near the cafe on the ground floor.

The second floor is accessed via a metal staircase, which is suspended above the reflecting pool and winds its way up through a small hole in the ceiling.

“The key element connecting all the spaces is the stairs,” the studio explained.

“The stairs are designed in their purest metallic form, further enhanced by the details of the balustrade where the fence becomes a simple element sliding into the structural beam at the bottom while having a profile on the top to allow visitors to grab the handrail comfortably.”

On the second floor, Dongqi Design selected a bright white finish to emphasise the old wooden structure of the building’s pitched roof. A series of square windows let light into the space and offer views out across the city and toward the sky.

To balance out the otherwise all-white interior, the VIP room is finished in a darker palette. During spring and summer, these darker shades also contrast with the colour of the trees outside.

XC273 has been shortlisted in the large retail interior category of this year’s Dezeen Awards.

Other projects in the running include a second-hand bookshop in Shanghai that uses supermarket-style crates to display its wares and a reusable sales showroom with fabric walls.

The photography is by Raitt Liu.