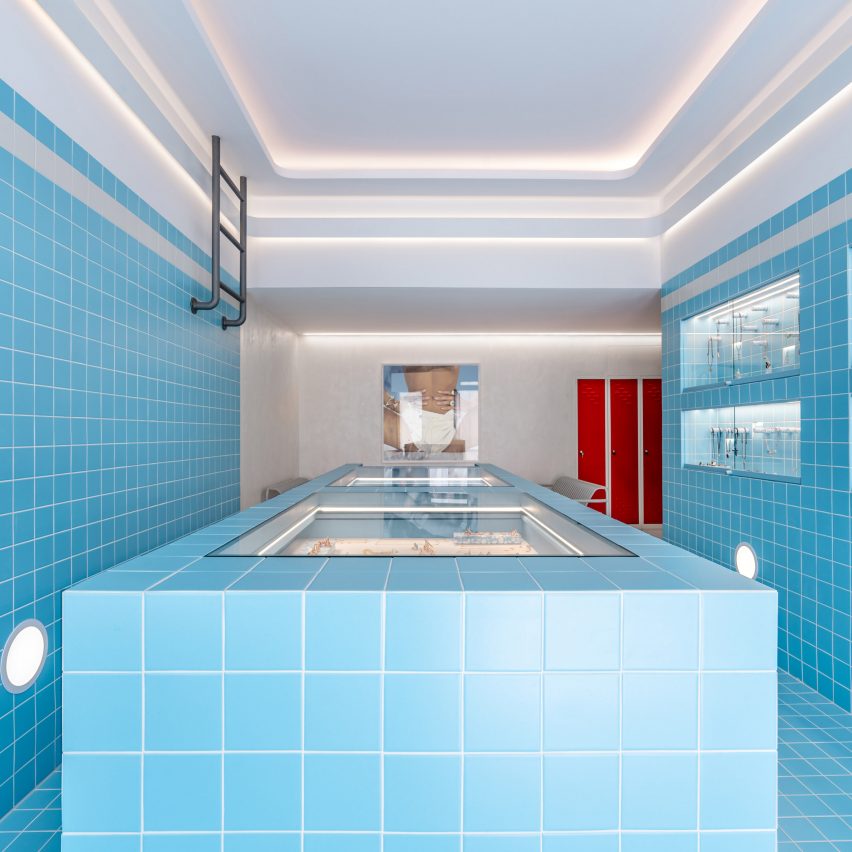 Creative agency Saint of Athens has used cool blue tiles throughout this jewellery store in Mykonos, Greece, for brand Gavelloto to make it resemble a “luxury 60s swimming pool“.

Saint of Athens worked with Dive Architects to make the jewellery store stand out from the plethora of nearby retail stores. It includes light blue tiles, lockers and a pool ladder.

“We were looking for an unorthodox way to present the colourful and opulent Gavello designs, so we came up with a surreal, summery idea,” said Saint of Athens founder Nikos Paleologos.

“Cosmopolitan and picturesque places like Mykonos tend to trap themselves in a dipole of rigid tradition versus forced extravagance. But Mykonos is a cosmopolitan place that calls for big and bold moves,” he told Dezeen.

From the outside, the store looks like any other “typical Cycladic store”, yet once inside, customers are transported into what looks and feels like an indoor pool.

The designers wanted the swimming pool features to create a nostalgic effect.

Towards the back of the store, a bench and set of red lockers add to the swimming pool look. Several round lights that resemble pool lights run around the bottom of the store.

Every detail is meant to make the space feel more realistic. The designers believe this creates a “familiar ambience and evoke an oblique summer feeling”.

To meet the jewellery brand’s practical requirements, mirrors, cushions and display cases have been dotted throughout. Pegs, which resemble hangers that swimmers place their towels on, are also used to display the jewellery.

A tile-covered island in the middle of the store serves as a focal point on the ground floor which encases a selection of the brand’s jewellery designs.

Swimming pool design has influenced other projects including Bun Turin by Masquespacio which features an all-blue seating area is built from pale tiles that are designed to look like a swimming pool.

Photography is by Gavriil Papadiotis.