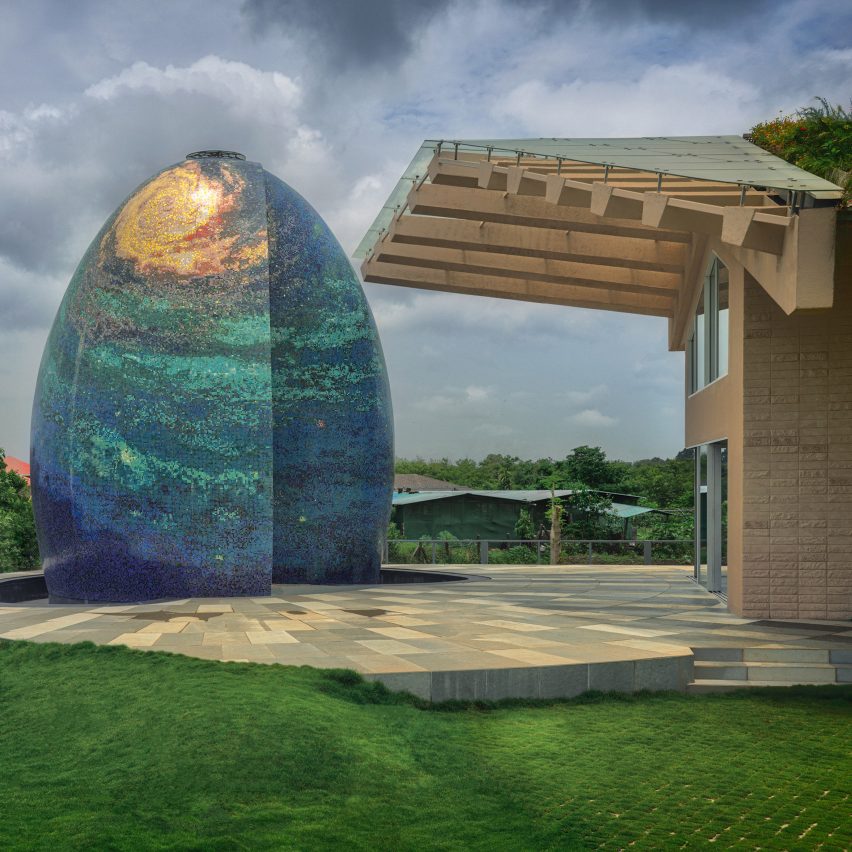 Indian architect Saket Sethi has completed the Sunoo Temple House on the outskirts of Mumbai with a rooftop garden and a private worship space that is designed to evoke a galaxy.

The dwelling was designed for a couple relocating from the Netherlands, who wanted a home and place to worship surrounded by flowers and greenery.

Sethi distinguished the home with an angled roof garden that has views over acres of surrounding paddy fields and created a garden temple that is shaped like an egg and decorated with a glittering mosaic.

“The client came back from Holland and said she just wanted to be surrounded by flowers and greenery and wanted to gift her husband the house as a surprise,” Sethi told Dezeen.

“The client is extremely spiritual and said she wanted a place to be thankful and to be reminded of that, to be able to meditate and to allow others to come and feel as she felt.”

Sethi’s decision to wrap the private temple with sparkling tiles was to reflect a comment made by the client, in which she said she wanted the room as a place to be “thankful to the universe”.

The tiled walls unravel slightly on one side, opening to reveal the glass entrance. This leads to its tiled, spiralling interior that evokes the inside of a conch.

The temple’s egg shape was chosen as a nod to a Shiva-lingam – a sacred stone in the Hindu religion.

It also created a spherical base around which visitors can walk, mirroring the same way a moon orbits a planet, according to the architect.

The Sunoo Temple House itself is built from concrete and distinguished by its large folded roof that was made from aluminium sheets.

To help it form part of its surroundings and attract birds and bees, the roof was landscaped as a garden, complete with creepers that hang down over the facades like curtains.

This green roof also has functional benefits, such as keeping the house cool in warm weather, while its angular form helps to drain water and protects the home from heavy winds.

Inside, Sunoo Temple House has four ensuite bedrooms, alongside a kitchen and an open-plan space for living and dining.

The interiors are designed with large windows and a muted material palette to ensure focus is retained on views outside.

The decoration is limited to a selection of ornaments, artwork and antiques collected by the clients from their travels around the world, alongside a custom dining table designed by Sethi.

Elsewhere in India, Charged Voids recently completed a house with a prayer room that occupies a white turret.

In Sakai, Japan, Ryuichi Ashizawa Architects attached an egg-shaped tomb to a house to pay homage to the city’s vast ancient burial sites, for which it is best known.

Photography is by Fabien Charuau unless stated.