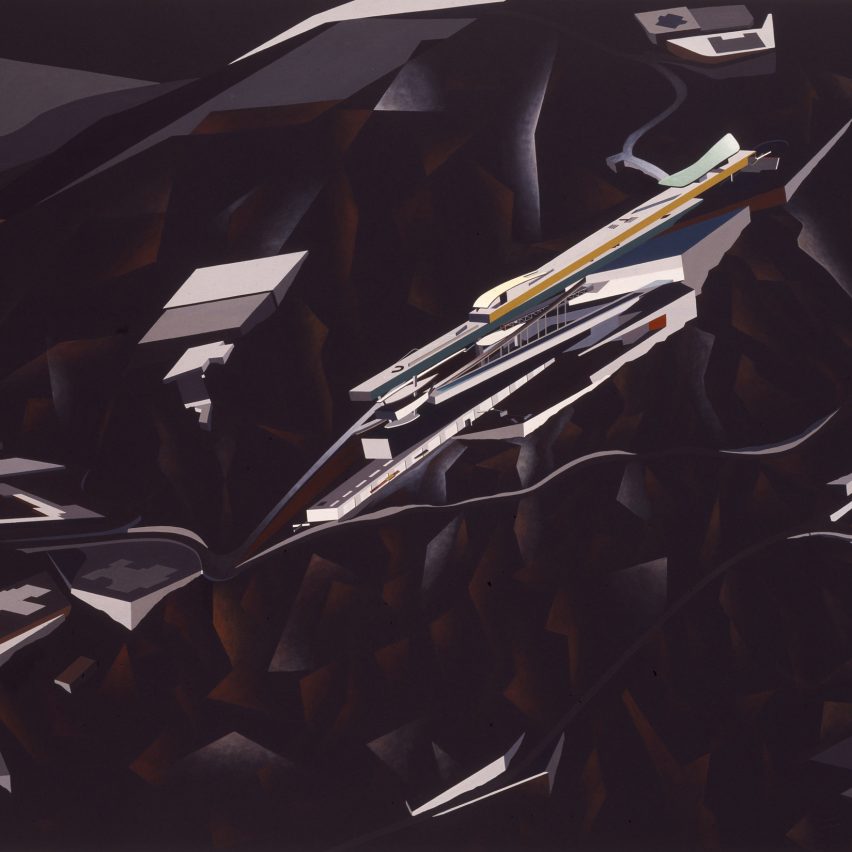 Continuing our deconstructivist series, we look at seven early buildings featured in the seminal 1988 Deconstructivist Architecture exhibition at the MoMA that launched the careers of Zaha Hadid and Daniel Libeskind.

“Deconstructivist architecture focuses on seven international architects whose recent work marks the emergence of a new sensibility in architecture,” explained MoMA in a press release announcing the exhibition.

“Obsessed with diagonals, arcs, and warped planes, they intentionally violate the cubes and right angles of modernism.”

Termed deconstructivists – a combination of the philosophical theory of deconstruction and the 1920s constructivist architecture style – the architects all shared a methodology and aesthetic that drew from both sources, according to Johnson and Wigley.

“Their projects continue the experimentation with structure initiated by the Russian Constructivists, but the goal of perfection of the 1920s is subverted,” continued MoMA.

“The traditional virtues of harmony, unity, and clarity are displaced by disharmony, fracturing, and mystery.”

Read on for seven projects featured in the seminal Deconstructivist Architecture exhibition: 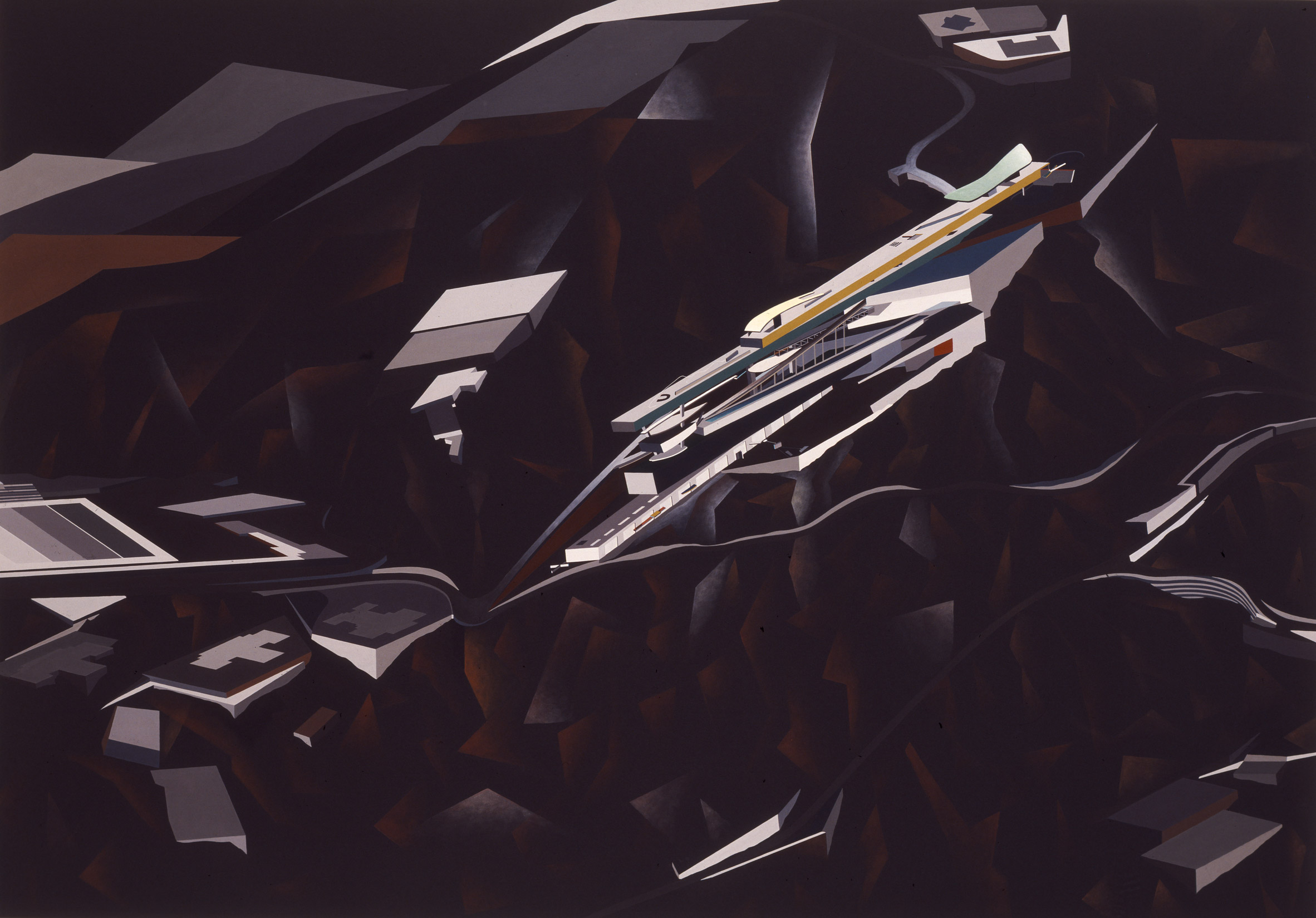 The Peak was Hadid’s winning entry into a high-profile architectural competition in 1983 to design a private club perched in the hills above Hong Kong.

Described in the exhibition publication as a “horizontal skyscraper”, the club would have been constructed from shard-like fragments within an artificial cliffscape carved into the rock.

Although never built, the competition and the constructivist-informed paintings depicting it launched Hadid’s career. 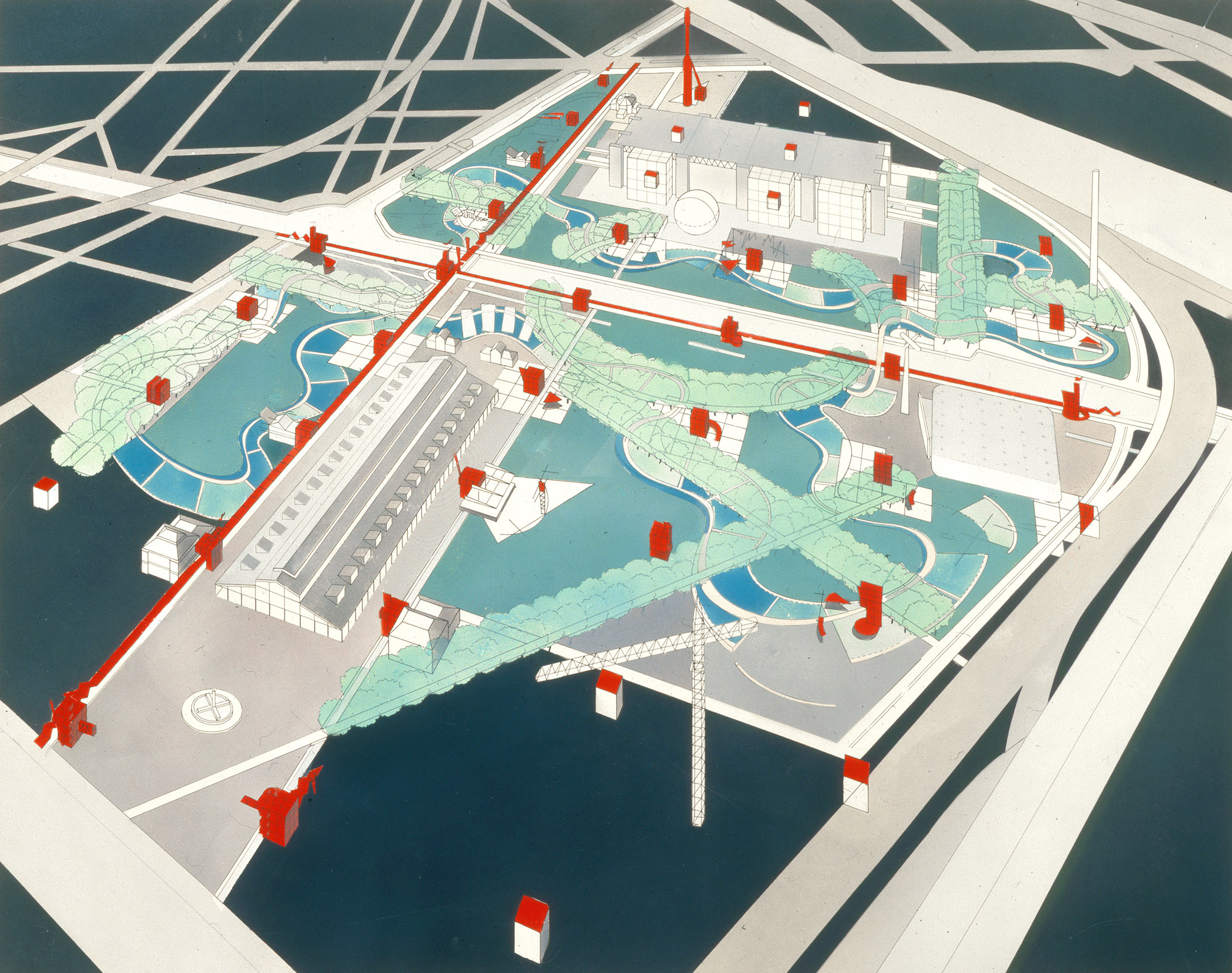 Parc de la Villette was one of the 1980s’ defining deconstructivist projects. Tschumi was chosen as the competition winner to design a major park in Paris ahead of 470 international entries, including fellow exhibitors Koolhaas, Hadid, and Eisenman who entered with deconstructionism theorist Jacques Derrida.

Tschumi arranged the park around three separate ordering systems – points, lines and surfaces – with numerous abstracted red follies distributed on a grid across the landscape.

According to Tschumi “it is one building, but broken down in many fragments”.

Described in the MoMA exhibition material as a “skeletal winged organism”, this rooftop extension to a law firm in Vienna was completed by Prix’s studio Coop Himmelb(l)au in the year that the exhibition opened.

A large meeting room is enclosed in an angular steel and glass structure that is in stark contrast to the traditional roofscape. 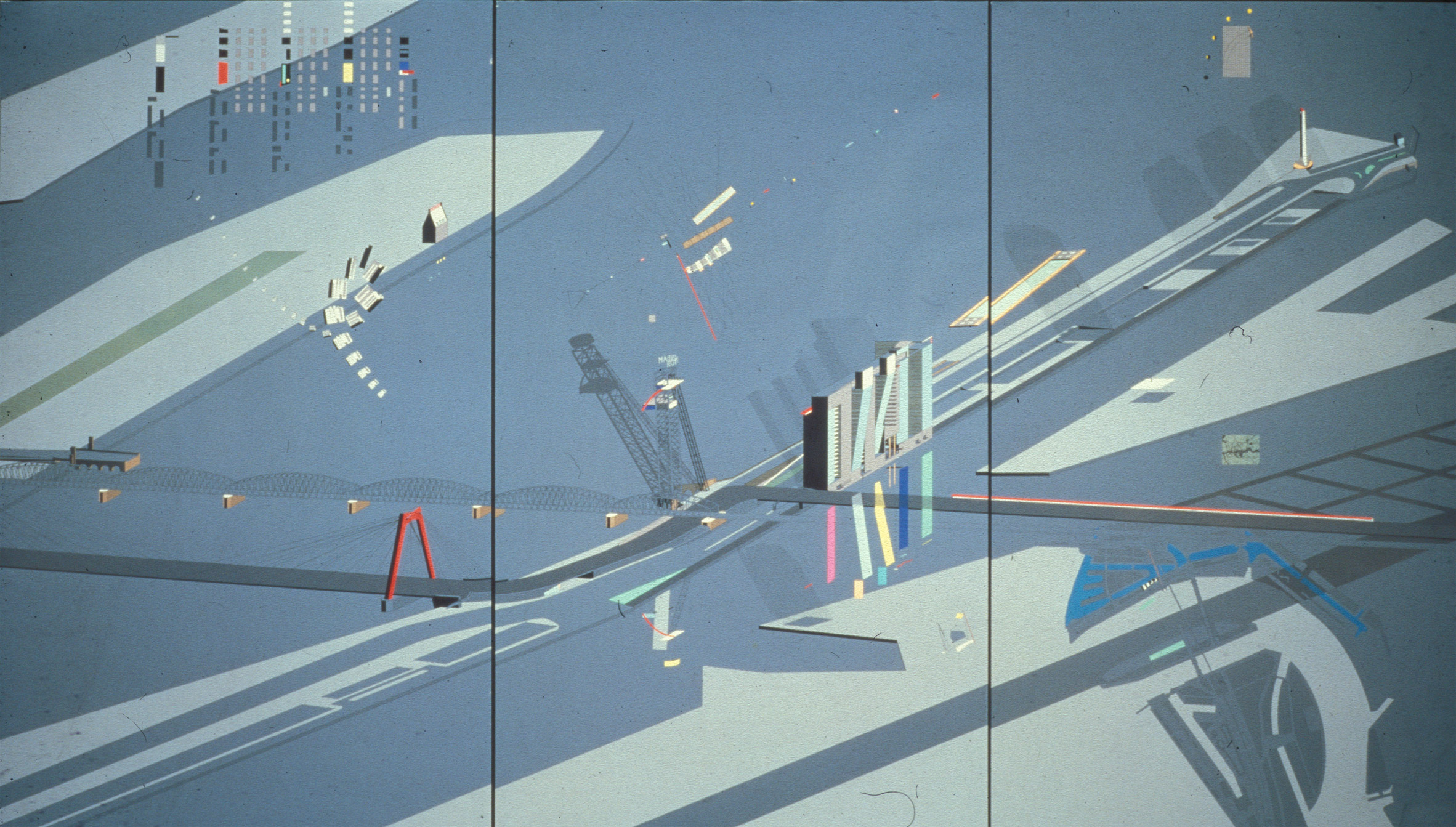 The Boompjes tower slab was the result of a commission in 1980 from the city of Rotterdam to investigate the future of high-rise buildings in the city.

Planned for a narrow plot of land alongside a canal, the Boompjes tower slab would have been an apartment block with communal facilities including a school at its base and a “street in the sky” at its top.

Its form merged the appearance of a single slab and a series of individual towers. 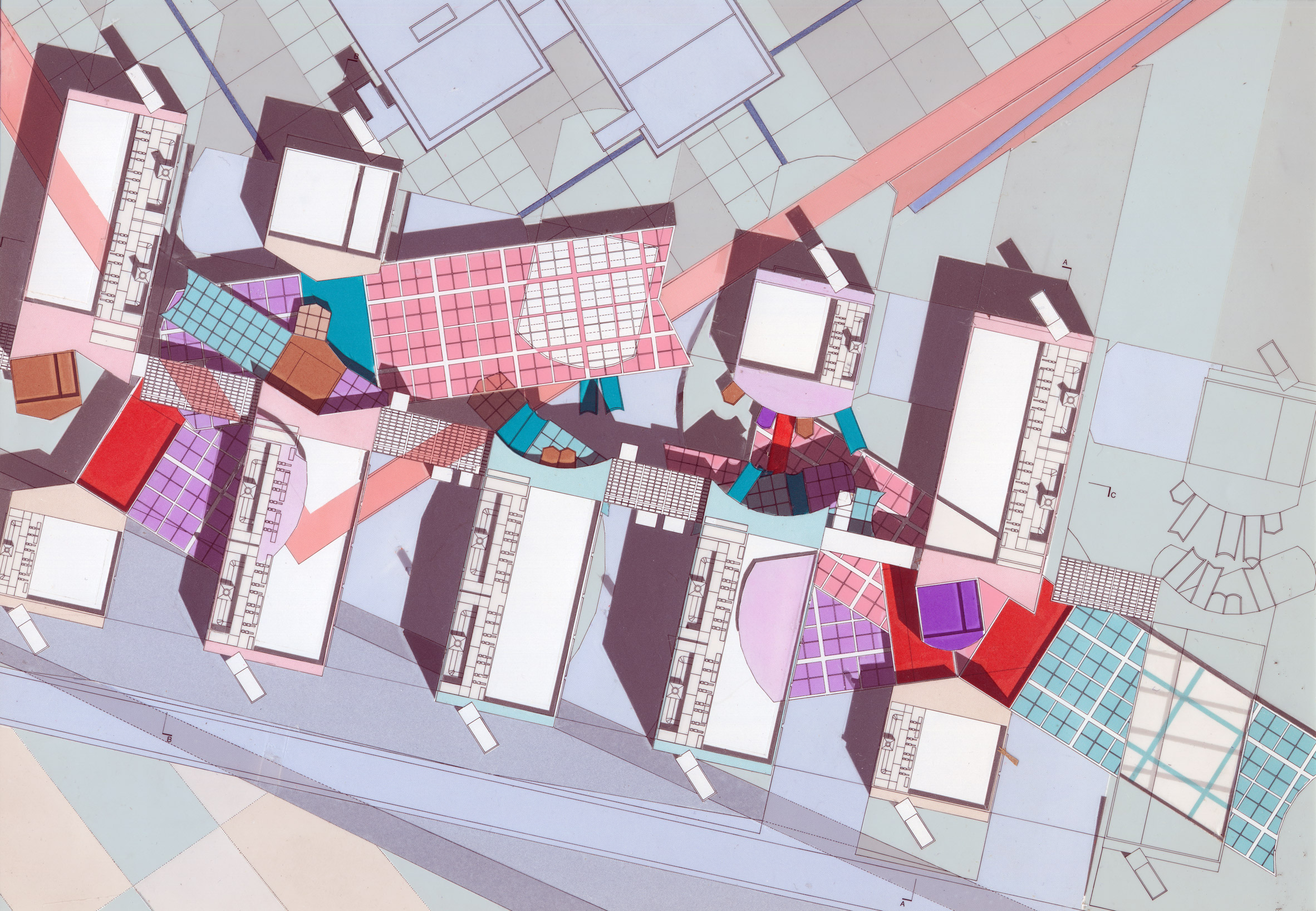 Peter Eisenman: Biology Center for the University of Frankfurt, Germany

Designed as a biotechnological research centre at the University of Frankfurt, this building derives its form from an investigation of DNA.

The unrealised project consists of a series of blocks informed by the geometric shapes used by biologists to depict DNA code. The blocks would have been arranged alongside each other and each broken into two parts. Additional lower rise blocks intersect the regularly aligned forms.

It is described by the exhibition curators as “a complex dialogue between the basic form and its distortions”. 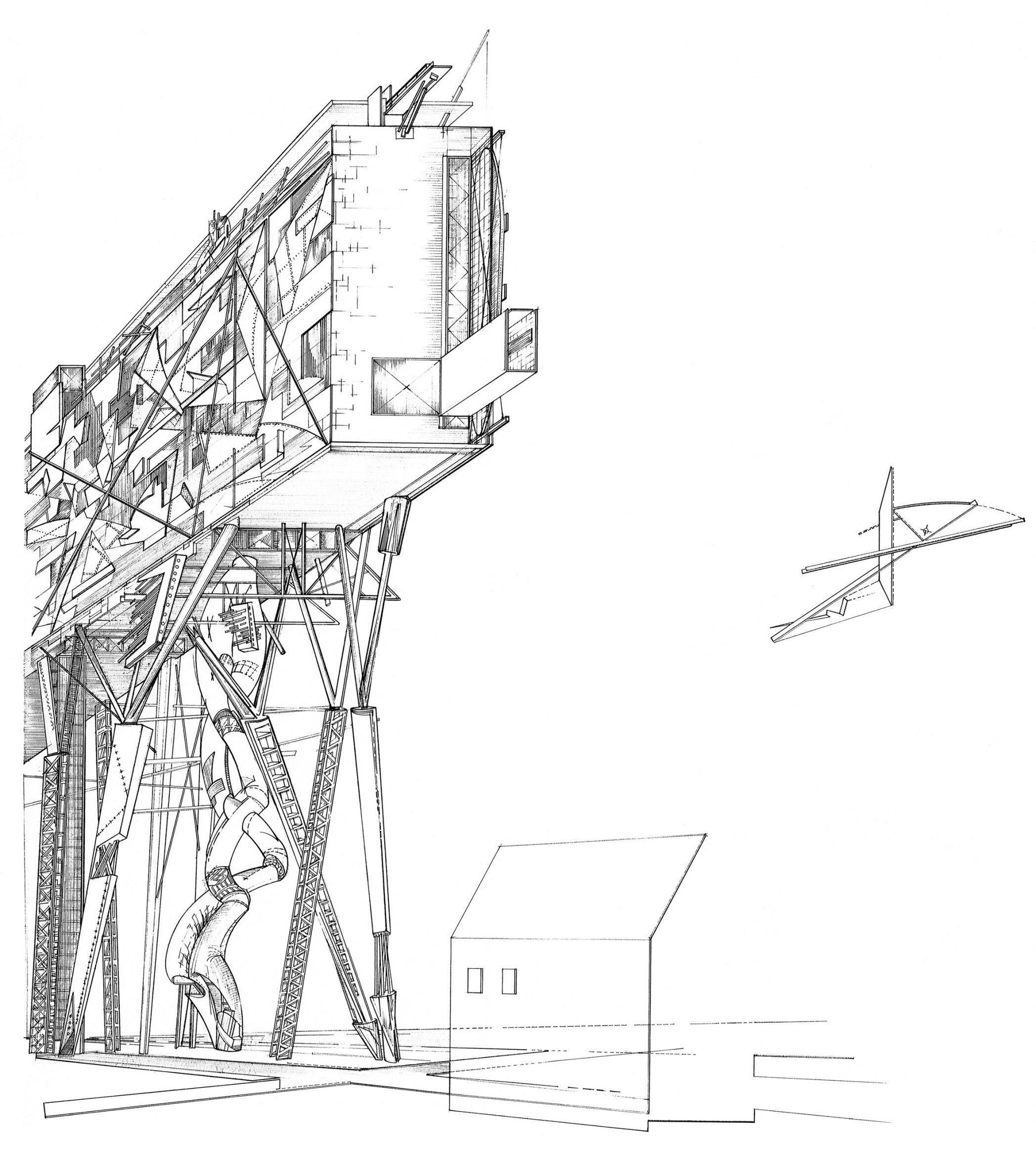 City Edge was a 450-metre-long building proposed as part of the redevelopment of the Tiergarten area of Berlin by Libeskind, who had not completed a building at the time of the exhibition.

The residential and office block would have risen from the ground so that its end was raised 10 storeys above the Berlin wall.

It acts both as a wall dividing the city and also shelters a public street to connect it. “It is subverting the logic of a wall,” said the exhibition curators.

One of two projects designed by Gehry to be included in the exhibition, this house was designed in three stages between 1978 and 1988.

The dramatic revamp of the architect’s own home wraps the original house in a series of geometric forms that seem to burst from its structure.

“The force of the house comes from the sense that these additions were not imported to the site but emerged from the inside of the house,” said the exhibition curators. “It is like the house had always harbored these twisted shapes within it.”