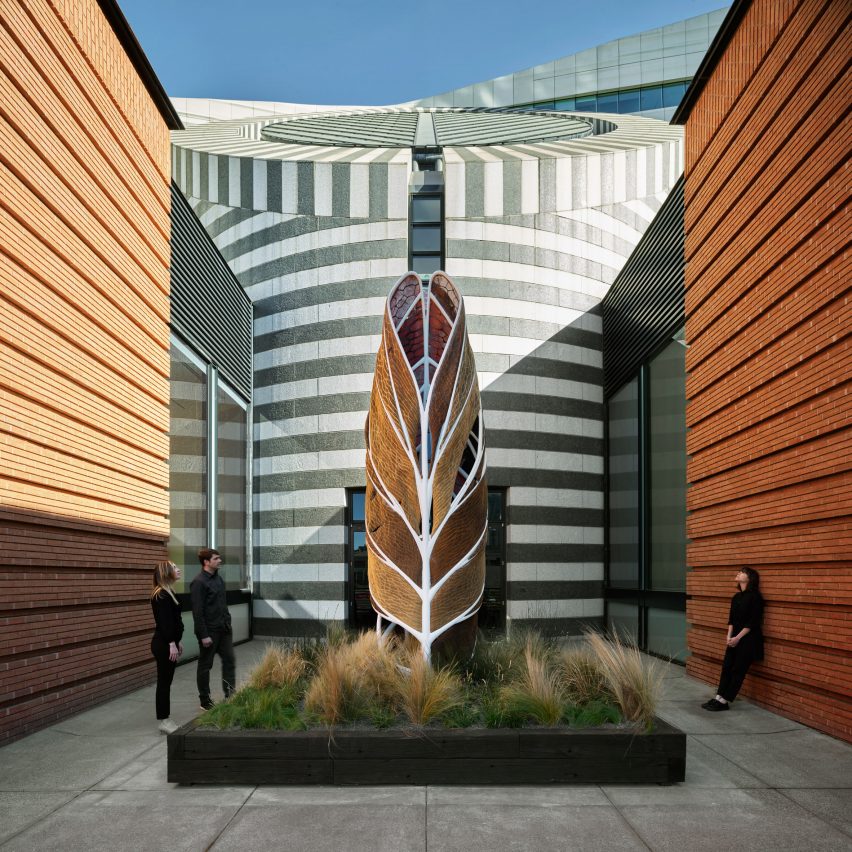 An architect, designer and pioneering materials researcher who founded The Mediated Matter Group at the Massachusetts Institute of Technology (MIT) and recently opened her own laboratory, Oxman is best known for otherworldly-looking designs and installations built from unexpected biological matter.

The exhibition at SFMOMA, Nature x Humanity, looks at how these works provide a vital provocation for architecture in the age of climate change.

“The question that drives Oxman studio’s work — how can one responsibly ‘architect’ amid a climate crisis when the built environment currently outweighs Earth’s biomass? — envisions new possibilities for the field of architecture,” exhibition curator Dunlop Fletcher told Dezeen.

“Through the imaginative projects on view, Oxman’s designs embolden a viewer to consider alternatives to today’s building practices that are contributing to an unhealthy and unsustainable habitat,” she added.

“This moment requires industry-changing big ideas, and Oxman’s team only works at that level.”

The exhibition includes work such as Oxman‘s decomposing Aguahoja I pavilion, created with her Mediated Matter Group at MIT and made from the molecular components found in tree branches, insect exoskeletons and human bones.

A fresh version of the pavilion is presented alongside a four-year-old, decomposing one, with a set of instruments between them measuring the process’s impact on the soil. 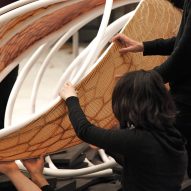 As well as explaining the work, the wall text beside it asks, “What if there were policies around building lifecycles, tools for measuring material use, and, instead of landfills, urban-scale composting plots?”

“It was important to me to not position Oxman as providing immediate solutions, but rather focusing on the strength of the selection of works on view and their ability to encourage thinking differently,” said Dunlop Fletcher.

“It is the only architecture studio I know that publishes material research while also engaging the public through art exhibitions. This scientific approach — where knowledge is valued over product — is critical in this moment.”

Dunlop Fletcher first began discussing the possibility of an exhibition with Oxman soon after initiating SFMOMA’s acquisition of the Gemini chaise lounge, and considers it a perfect fit for the museum, which she says is the first on the US west coast to have a dedicated architecture and design collection.

“It’s focus is to collect and exhibit visionary architecture, meaning works that are future facing but are in reality a critique of today,” she said.

The museum worked closely with Oxman’s team to assemble and present the objects in the collection, and developed an exhibition design geared around reducing environmental impact and ensuring a sense of the surrounding city and time of day.

They built no new walls and used glass instead of Plexiglas to protect the works. They are shielded by hanging casework created by SFMOMA Design Studio, which aimed to define a spatial volume around the pieces. 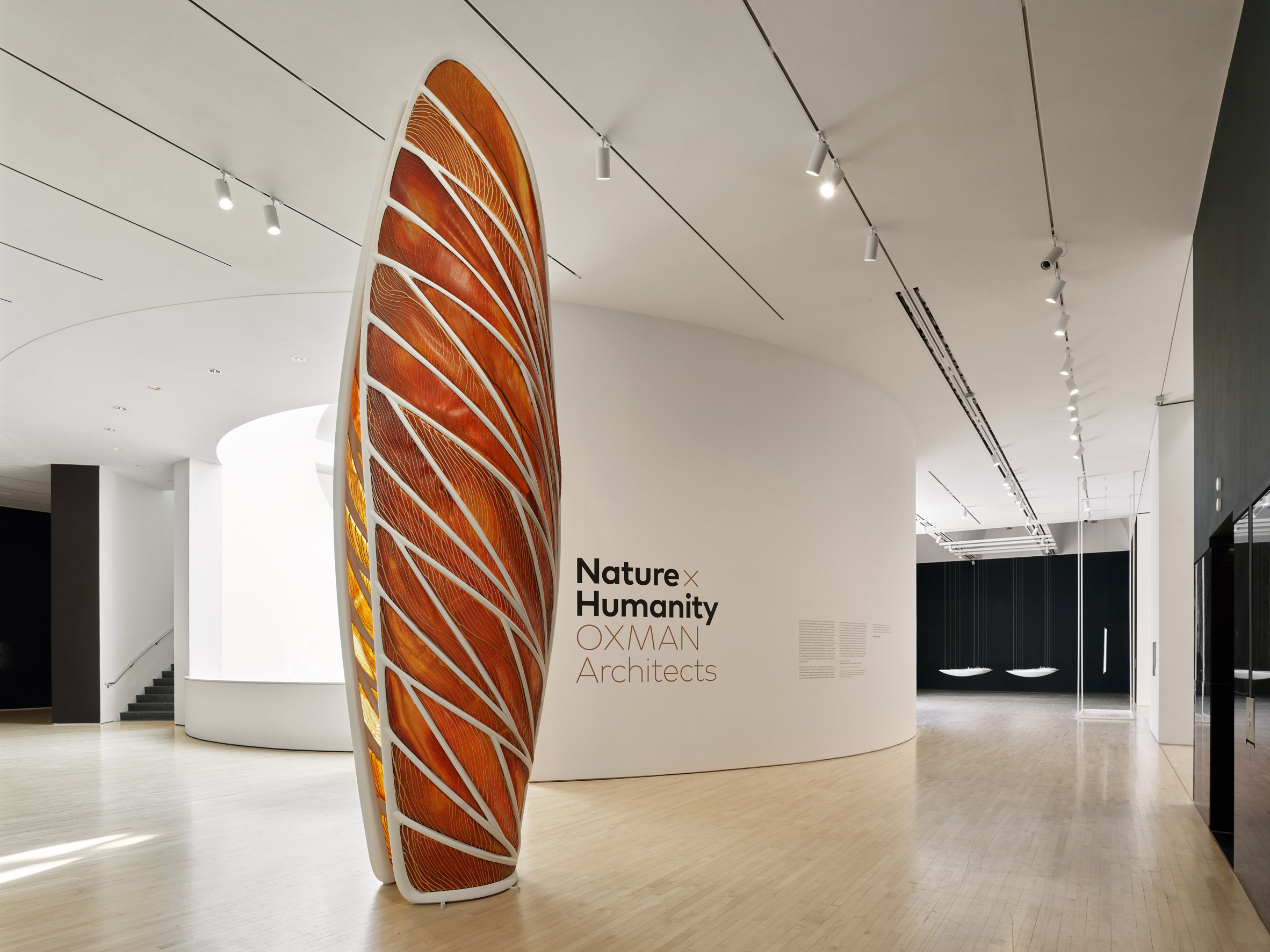 “Buckminster Fuller’s Geodesic Dome was a curveball to modern architecture that could not be ignored, as it raised questions of current construction inefficiencies. Aguahoja resurfaces those questions but it also expands the critique and remains open-ended.

“Aguahoja introduces a 3D-printed, biocompatible material for its panels — panels that not only decompose, eliminating a need for shipping or storage, but also provide new nutrients from the ocean to soil upon degradation (my favourite aspect of the panel material).

“It becomes an architecture that doesn’t just reduce its impact on the soil, it enhances it.” 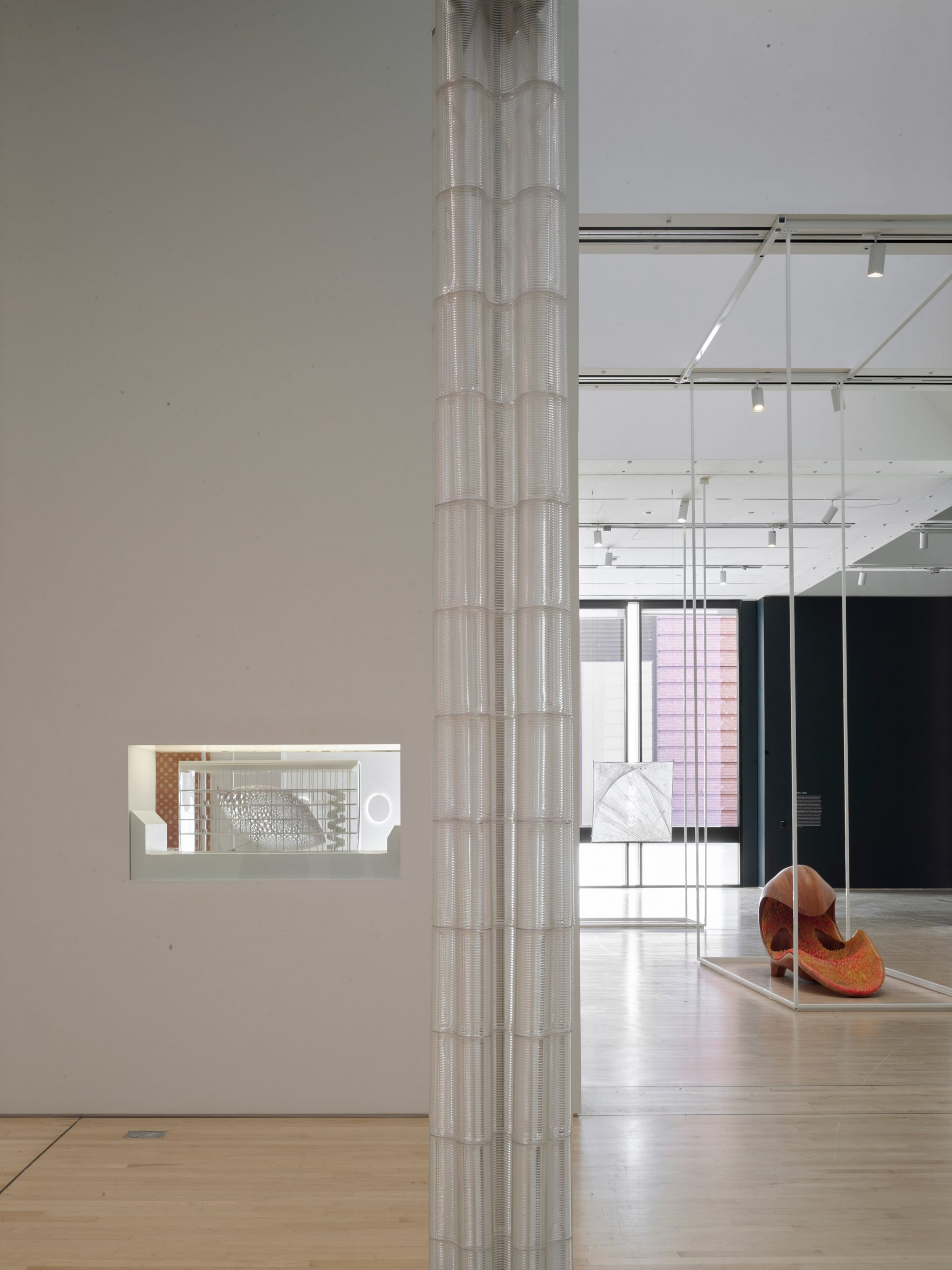 “Oxman’s Glass Columns, each a stable column, beautifully refute the notion of glass as fragile. New fabrication technologies allow for rethinking existing material. The curved sides of the glass increase stability thereby eliminating a solid core, which introduces additional capacities for columns, such as lamps and lighting.” 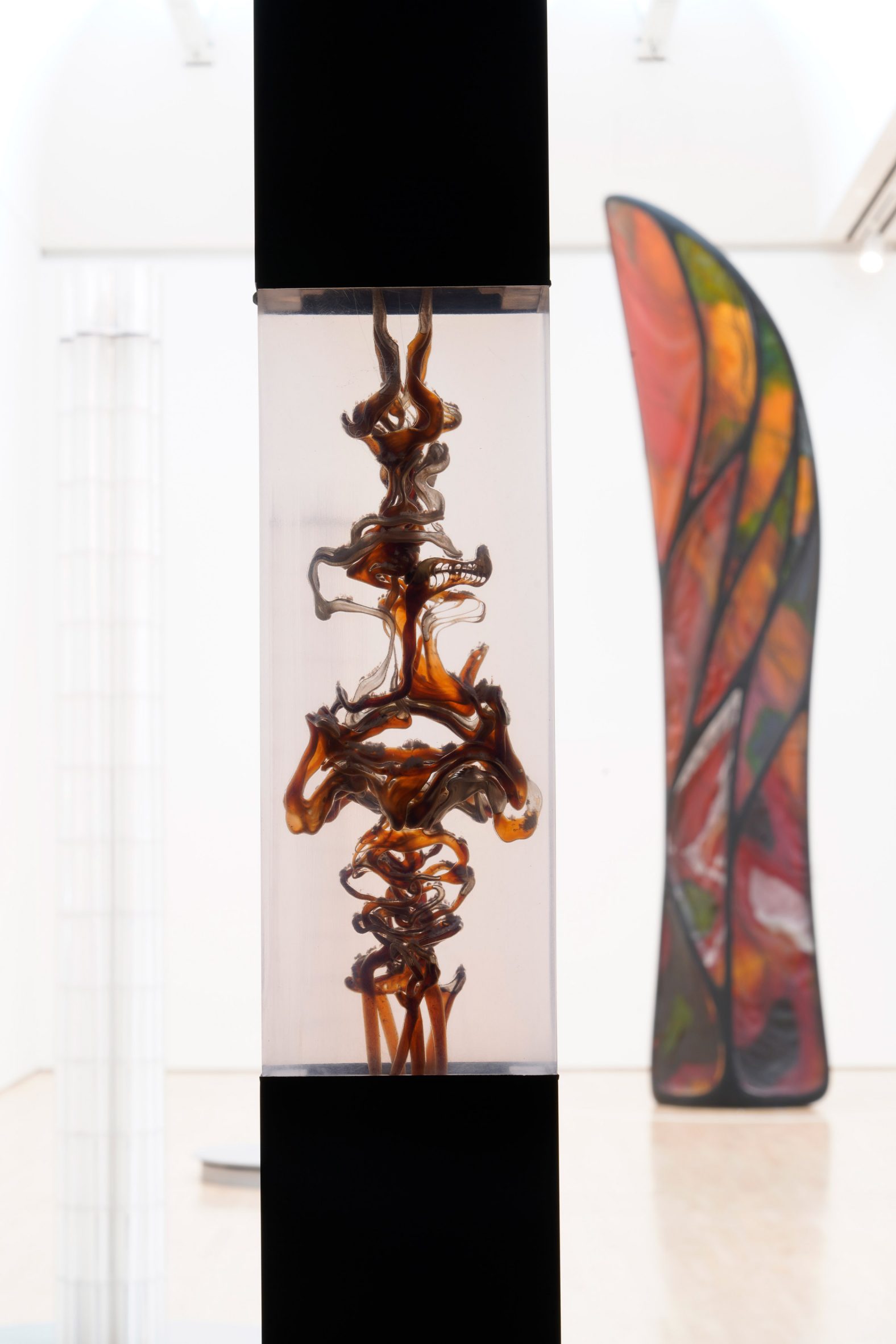 “There is no question that the introduction of working with Hybrid Living Materials (HLMs) elicits exciting possibilities for any design, including architecture. An architectural building material that could hold a living, responsive material greatly reduces the need for heating/cooling infrastructure.

“Through the extraordinary patterns and forms of the channels in the block holding melanin, Totems allows one to envision architecture as alive — dynamic and shifting — as opposed to static. Many Oxman projects explore the potential of HLMs — a concept they pioneered – from the Vespers and Wanderers wearables to the Biodiversity Pavilion.

“Considering Architecture as ageing, living and moving gets one closer to an ideal Neri has introduced – envisioning the potential to grow buildings in the future.” 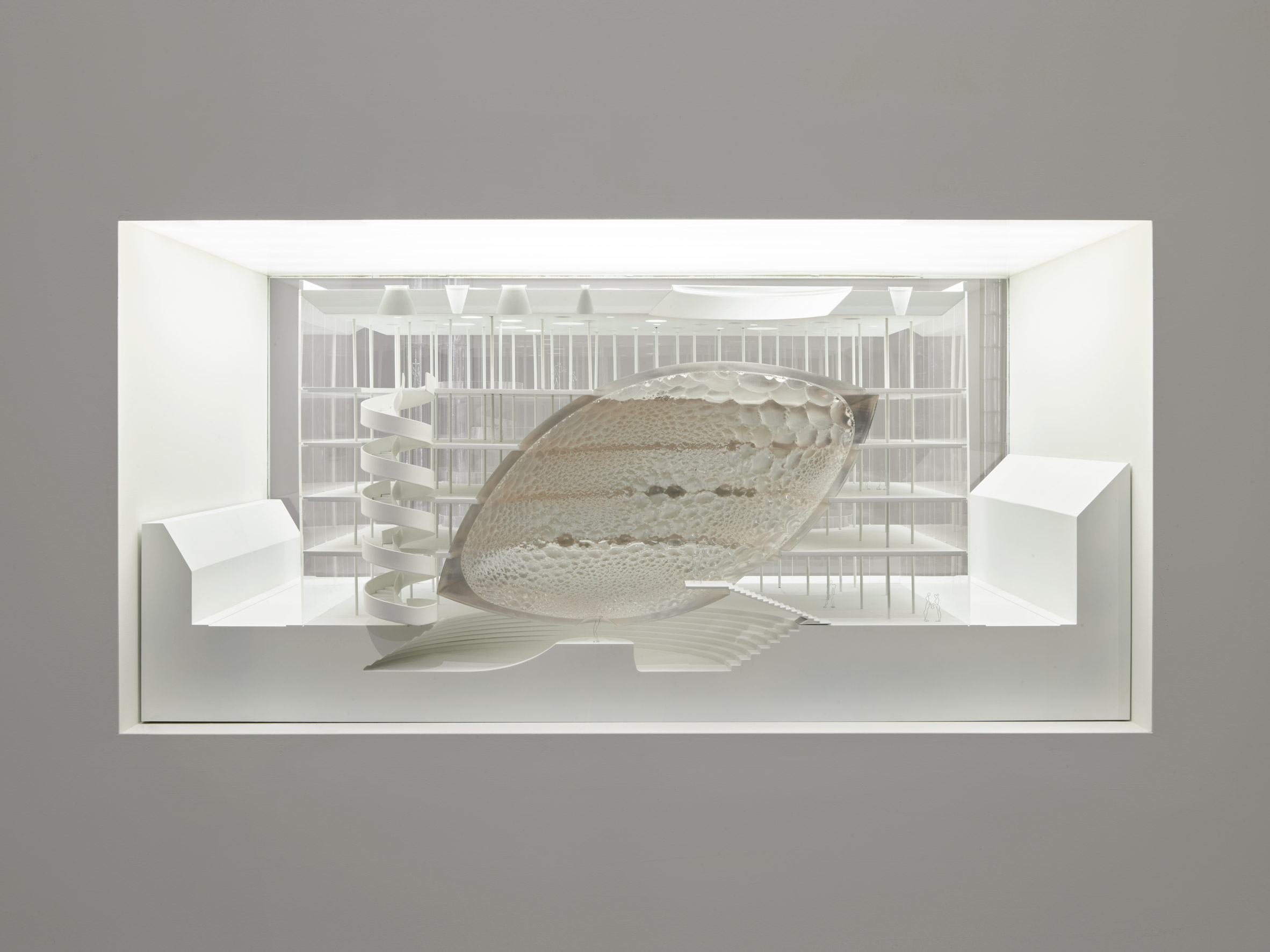 “The Gemini Chaise is a favourite – not only because it was the project that introduced me to Neri’s practice, but it is a work with multiple functions that I see in many of the Oxman projects. What else can a design object or architectural element do?

“The Gemini Chaise was designed in response to a colleague’s research on the healing properties of sound vibrations. It was meant to be medical equipment, perhaps to be tucked away, but was designed as furniture one would want to see, use and share in celebration of individual strength and health.

“The Gemini Cinema model (above) scales that potential from the individual to a group, imagining a theatre where people may gather to participate in collective healing.” 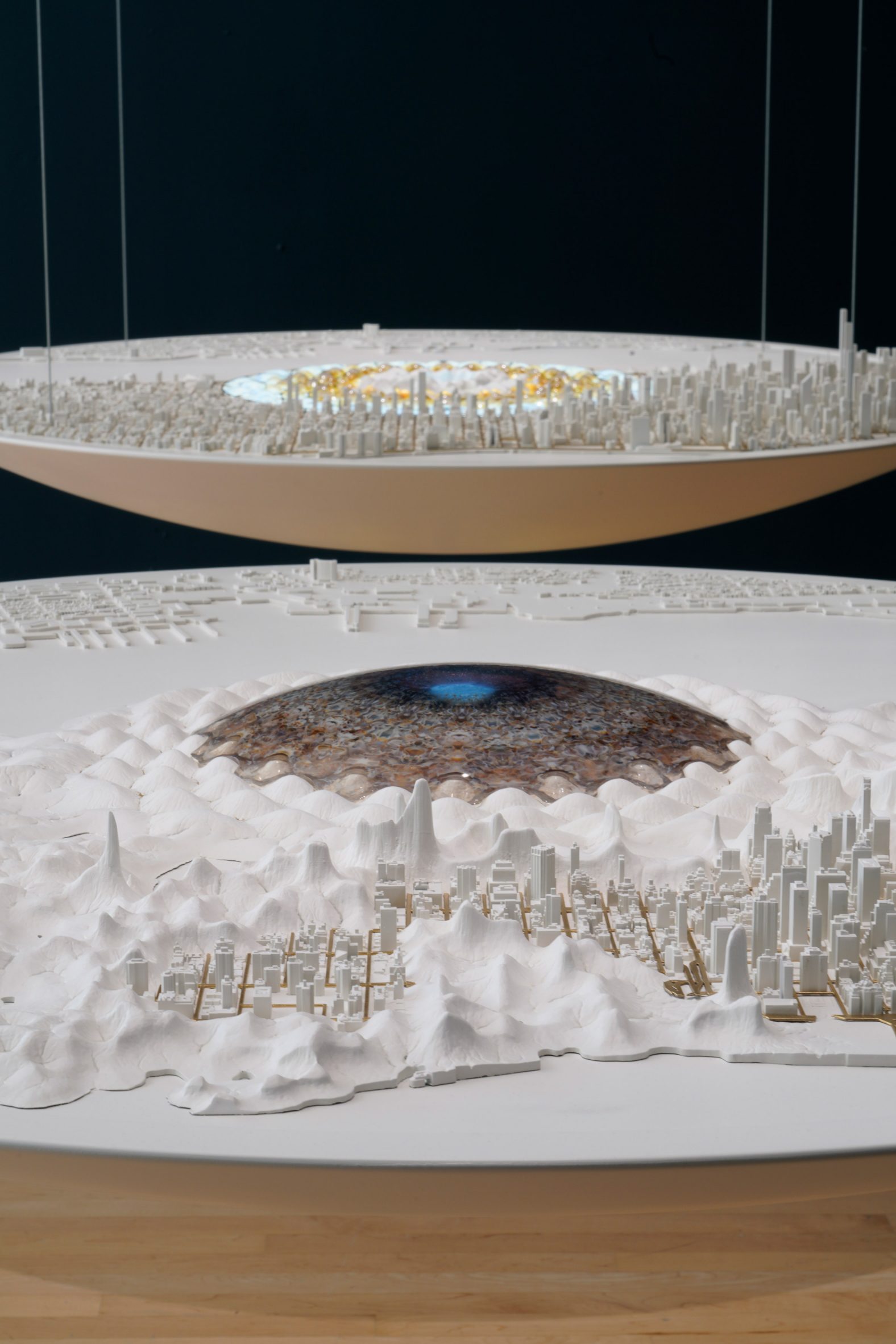 “The urban study models for Man-Nahāta debuted in the SFMOMA exhibition, and for me, is a project that expanded Oxman’s collaboration and vision for architecture’s potential.

“Through an uncanny coincidence Neri met filmmaker Francis Ford Coppola who had written a script in 2000 for Megalopolis, a science fiction film, featuring a scientist-architect who works to redesign Manhattan after an apocalyptic event. In one of those art-imitates-life moments, Oxman took the opportunity to consider how one might redesign Manhattan, where the Oxman studio is now based.

“Looking 400 years in Manhattan’s past prior to colonisation, Oxman found the moment where humanity and nature were in balance. Using that time frame to project 400 years into the future, each model represents a shifting built environment in 100-year increments.

“In 2400, the iconic buildings of Manhattan today are no longer recognisable; rather, a mountainous range exists in its place, asking one to consider whether humanity succumbed to nature or whether humanity learned how to grow architecture to enhance nature.”

The photography is by Matthew Millman.

Nature x Humanity: Oxman Architects is at the SFMOMA from 19 February to 15 May 2022. See Dezeen Events Guide for an up-to-date list of architecture and design events taking place around the world.