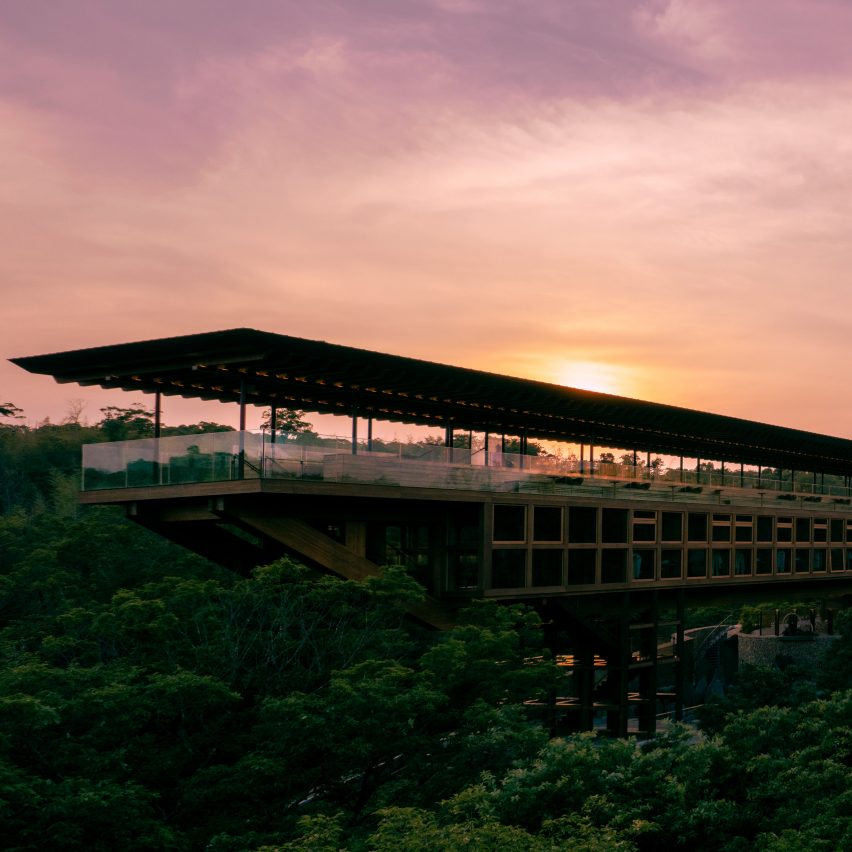 An open-air platform for meditation is elevated above the treetops at Zenbo Seinei, a wooden retreat that Pritzker Architecture Prize-winning architect Shigeru Ban has completed on Awaji Island in Japan.

Nestled amongst trees on the island’s north side, the meditation retreat is aimed at tourists seeking space for self-reflection, healthy eating and mindfulness.

Shigeru Ban Architects designed Zenbo Seinei as a long and slender wooden volume that appears to emerge out from the treetops, immersing visitors in nature.

Structural support is provided by two steel columns encased by wood and a Vierendeel truss – a type of truss that contains no diagonal members.

Inside, the building contains meditation spaces, guest accommodation and a restaurant serving dishes enjoyed by Buddhist monks and made from local vegetables.

Beneath the structure is an open-air pool of water, filled with rocks and sculptures.

The bulk of the Zenbo Seinei building measures 90 metres in length and 7.2 metres in width.

This is overhung by the 100-metre-long wooden deck with sliding glass walls, which provides a platform for zazan – a form of sitting meditation.

Zenbo Seinei was first revealed by Shigeru Ban Architects in March of this year.

“We planned an accommodation facility where you can experience zazen on a small site with abundant nature on Awaji Island,” the studio said at the time. 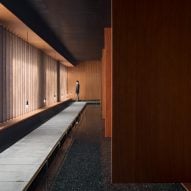 The building was commissioned by the Japanese company Pasona Group, which oversees a number of facilities on Awaji Island in the Seto Inland Sea.

According to Pasona Group, the project and its site on the verdant island are a response to the coronavirus pandemic, which it said has led “to major shifts in people’s attitudes and values towards life and work”.

“There has been a growing interest in opportunities to reassess one’s own contentment in environments rich in nature, and in lifestyles that promote physical and mental well-being,” Pasona Group said when the design was revealed.

Ban founded Shigeru Ban Architects in Tokyo in 1985. He was the winner of the 2014 Pritzker Architecture Prize and was announced as an ambassador for the EU’s New European Bauhaus in 2021.

As part of the project, his studio is also creating a cafe with a series of wooden huts on the surrounding 3,000-square-metre site.

Elsewhere, the studio recently completed the Tainan Art Museum building in Taiwan and a boutique hotel in Japanese woodland.

The photography is courtesy of Zenbo Seinei.