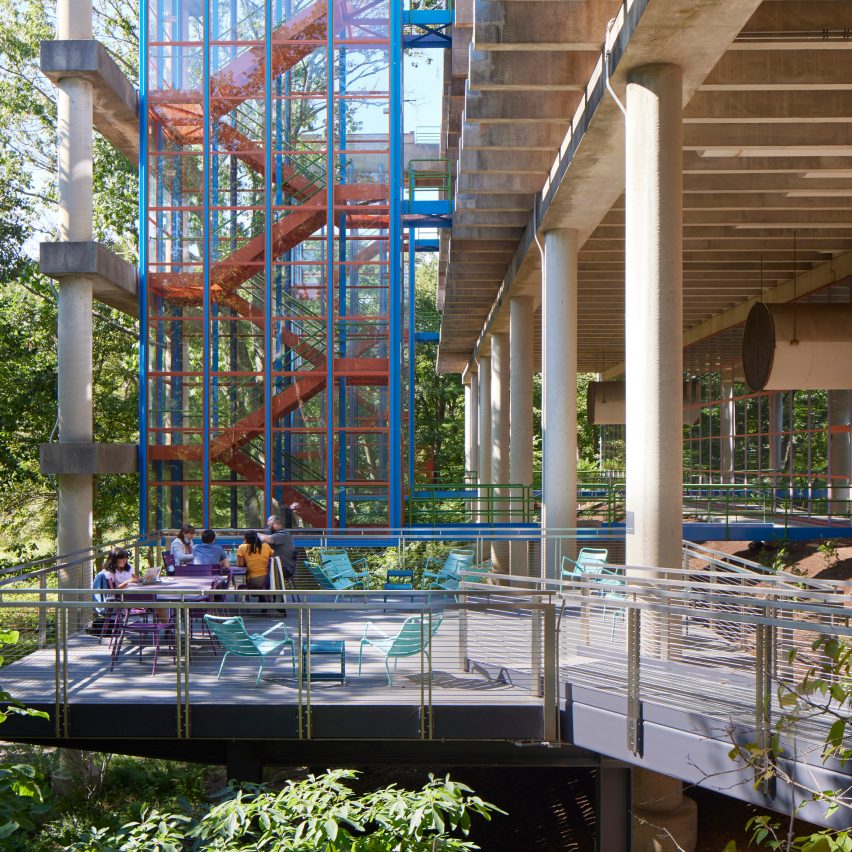 Architecture studio SOM has redeveloped a science complex in Massachusets using mass timber to integrate a series of existing buildings, with the earliest dating back to Frederick Law Olmsted’s original campus layouts.

Some of the buildings on the campus dated to the 1920s and ’30s – when the campus was master planned by American landscape architect Olmsted. These structures were consolidated into a single one in the 1970s and expanded in the 1990s.

“The project is a careful mix of removal, renovation, and addition that will give students and faculty a more inviting and engaging experience,” said SOM design partner Colin Koop.

“The original science center merged a collegiate Gothic brick structure with a modernist addition that needed substantial renovation to its exterior and to underutilized spaces inside,” said SOM.

“Fortress-like and difficult to navigate, the center was less than the sum of its parts.”

It decided to restore the neighbouring L-Wing – designed by American architecture studio Perry, Dean, Stahl, and Rogers – because of its significance as a “valuable example of modernist architecture that inspired curiosity in the sciences”.

During the restoration of the L-Wing, SOM replaced the entirety of the envelope with more “durable” materials but kept the austere concrete foundations exposed.

The studio also added suspended terraces around a series of restored, colourful stairwells that are outside of the building.

“With its expansive laboratory spaces and exposed concrete structure and mechanical systems, the L-Wing boldly contrasts with the more traditional architectural styles of the Wellesley campus,” said SOM.

SOM sought to unite the different architectural styles by installing a multi-storey atrium – called the Focus – by enclosing the space between the L-Wing and the single Gothic-revival wall leftover from Sage Hall.

The studio’s newly designed structure was placed on the site where the remainder of Sage Hall stood.

A series of pavilions were arranged around a central space called Chao Foundation Innovation Hub. The sprawling structure is clad in a ship-lapped, zinc-panelled facade.

SOM used mass timber – a high-strength wood composite – for the structure’s beams and ceilings as well as much of the finishes.

The central hub features high ceilings, with some spaces three storeys tall. Throughout, windows provide views of the labs in the other buildings of the complex therefore “putting science on display and enhancing the sense of a ‘village’ atop Science Hill,” according to the studio.

High sustainability standards were also set, according to the studio.

It said that before the renovation, the science buildings were among the most energy inefficient grouping of structures on campus. 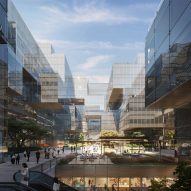 In addition to mass timber and the use of recycled zinc for the facade that aimed to reduce the carbon impact, energy usage was reduced with new mechanical systems and  the addition of natural lighting elements. Wellesley College Science Complex has received LEED Platinum certification.

Wellesley College said that these changes will contribute towards a 2040 carbon neutrality goal set by the institution.

SOM was founded in 1936 by Louis Skidmore and Nathaniel Owings in Chicago. Other recent projects by the studio that incorporate mass timber include a UN office recently completed on Lake Geneva.

The photography is by Dave Burk.