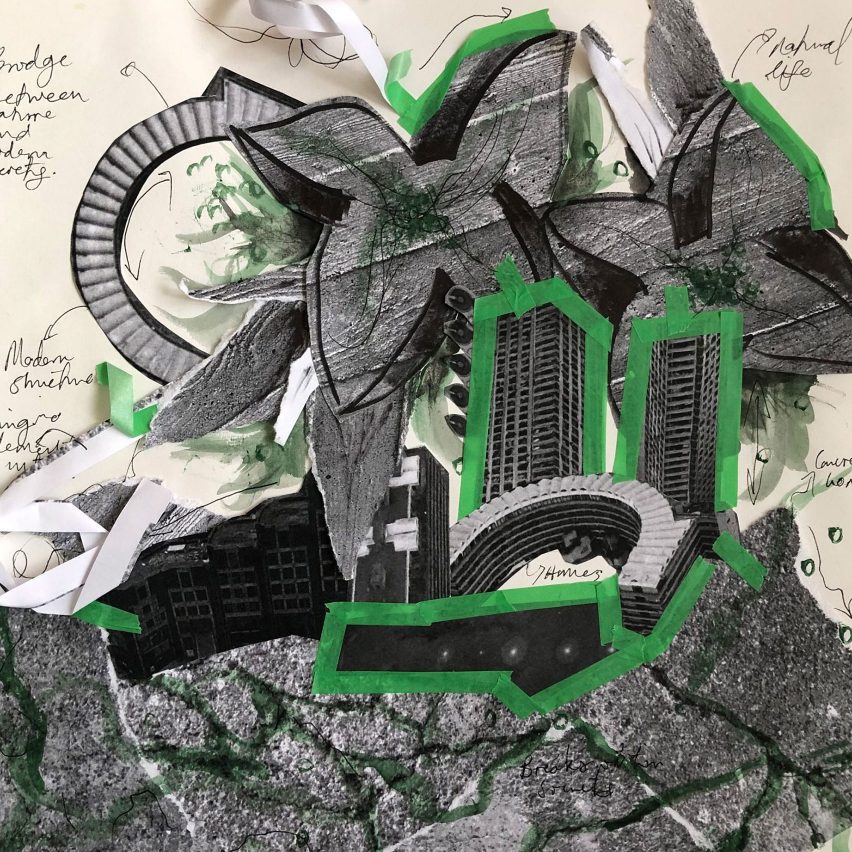 Students of the Accelerate mentorship programme explore the architecture of their London boroughs in our latest school show.

A physical exhibition of the students’ work will be exhibited at the Brunel Museum in London on 14 and 15 August.

“Accelerate is a design education and mentoring programme aimed at increasing diversity in the built environment professions. The programme was developed and established by Open City, in partnership with The Bartlett, UCL.

“This year, Accelerate looked different to previous years. For the first time, we had to collaborate digitally and this year’s cohort of sixth form students completed most of their work from home.

“Students investigated their bedrooms, local landscapes and local boroughs, through the lens of this year’s theme: fragments of the city.”

“Originally built as a Roman fortification for the provincial city of Londinium in the second century CE, the London Wall remained a material and spatial boundary for the city throughout the early modern period. The various gates in the wall functioned as relief valves where development spilt out to occupy spaces outside the wall.

“Accelerate students created cardboard prototypes for their gates to Southwark, which act as doors, windows, balconies, stages, into and onto the borough. Students drew inspiration from specific buildings in Southwark to inform their ideas and chose words from their collective manifesto for an ‘open city’ to reflect on their architectural expression and consequences.” 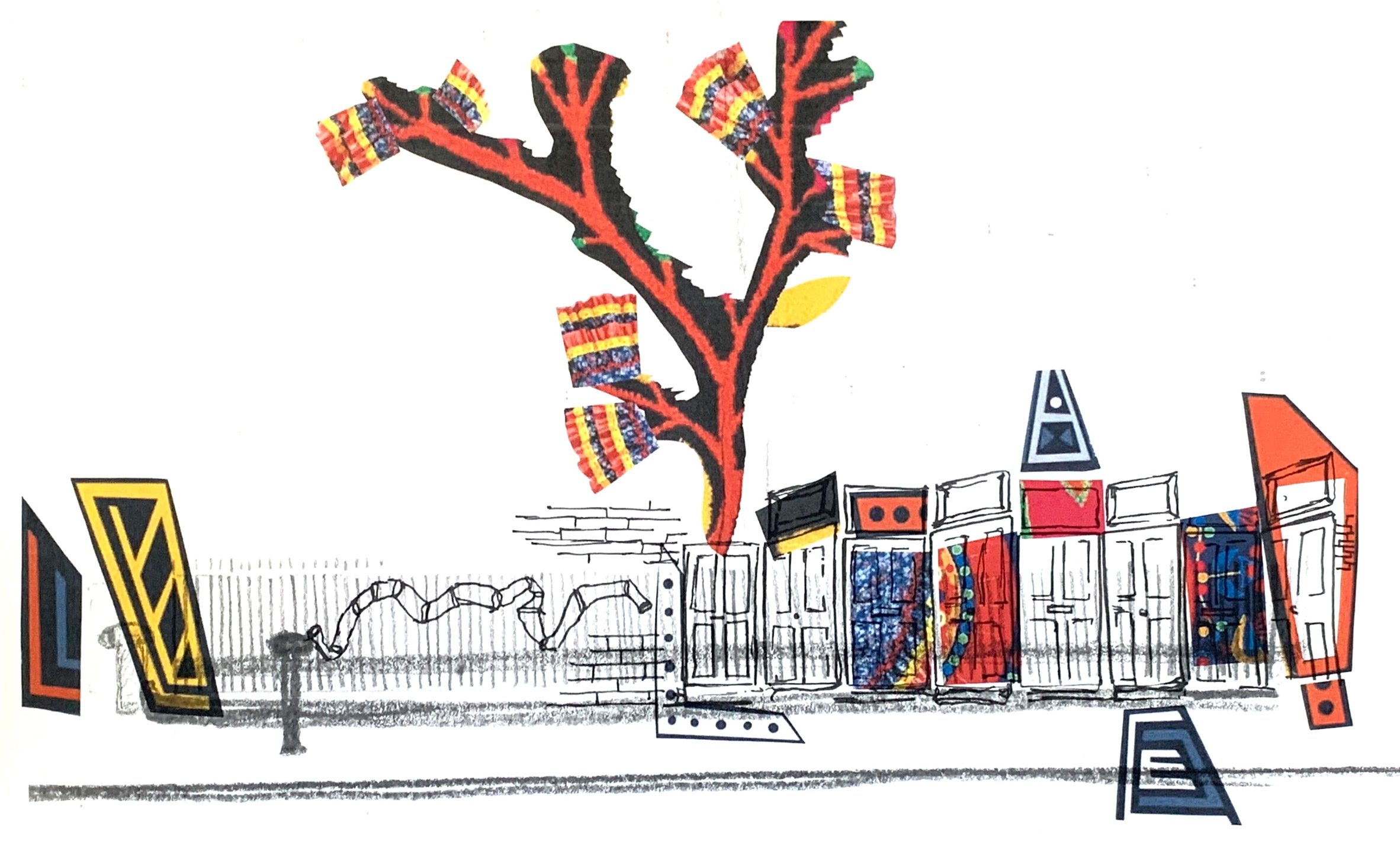 “Fragments and the city enabled me to explore the importance of the relationship between the movement of people with the built environment. The project has expanded my horizons in terms of learning about abstract scales and proportions in designing 3D structures, making models and the significance of sustainability in the longevity of buildings.

“I went to two different architect mentor practices with varying objectives in their architectural ambitions. One focused on small scale extensions and analysing the surrounding context of the site in considerable detail.

“Another made large-scale projects such as educational campuses. I found myself leaning towards converging nature within everyday buildings, demonstrated in integrating green spaces and natural bodies of water in buildings.

“I have learnt the importance of understanding the surrounding context of a site first: analysing where the influx of people come from to the site and where transport links are, to make it more easily accessible for all.” 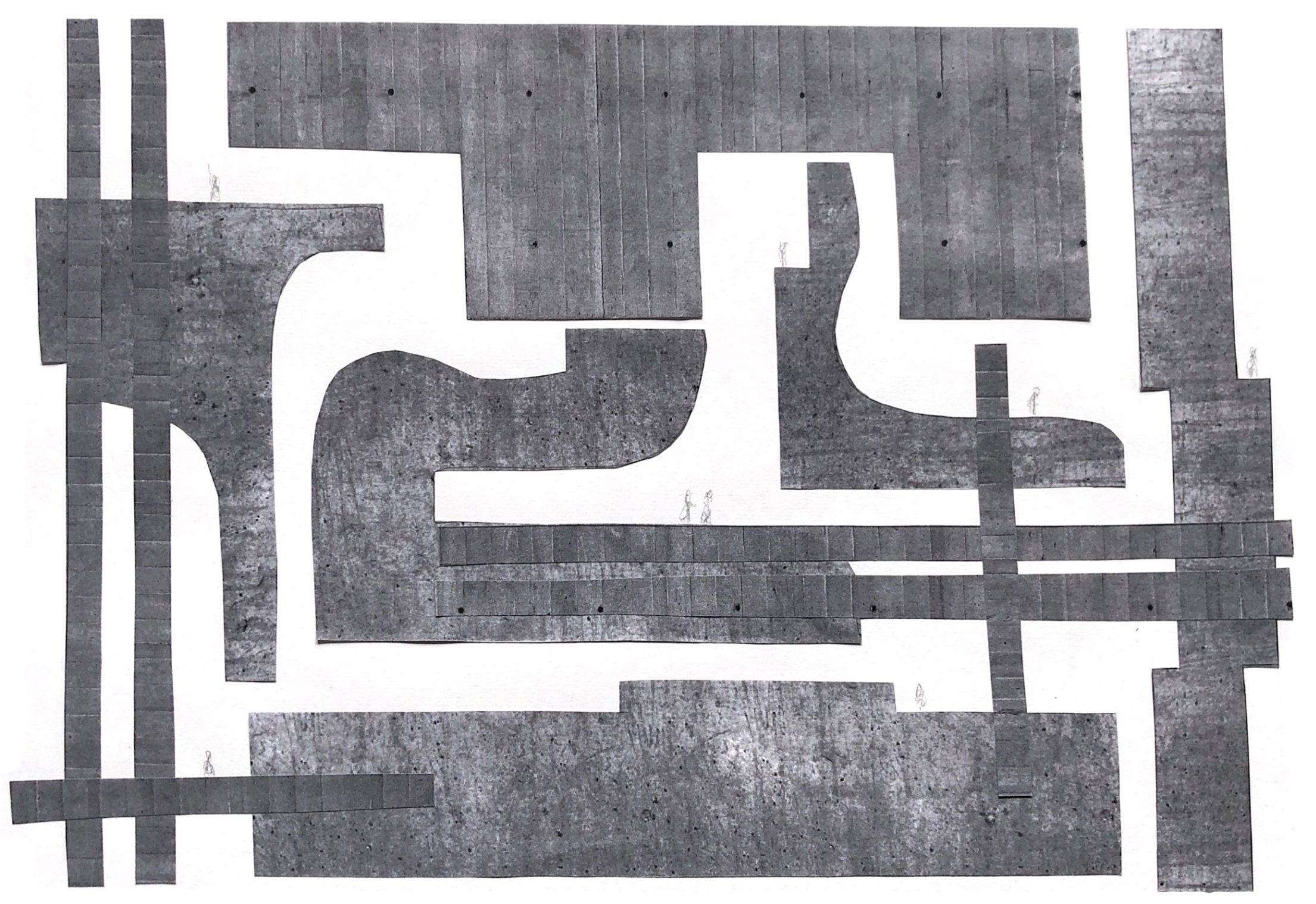 “To me, architecture isn’t purely focused on buildings but revolves around everything we interact with. Reflecting upon the theme ‘fragments’, I incorporated everyday objects together and turned them into structural collages. It has helped me a lot with my creativity and understanding the boundaries of composition.” 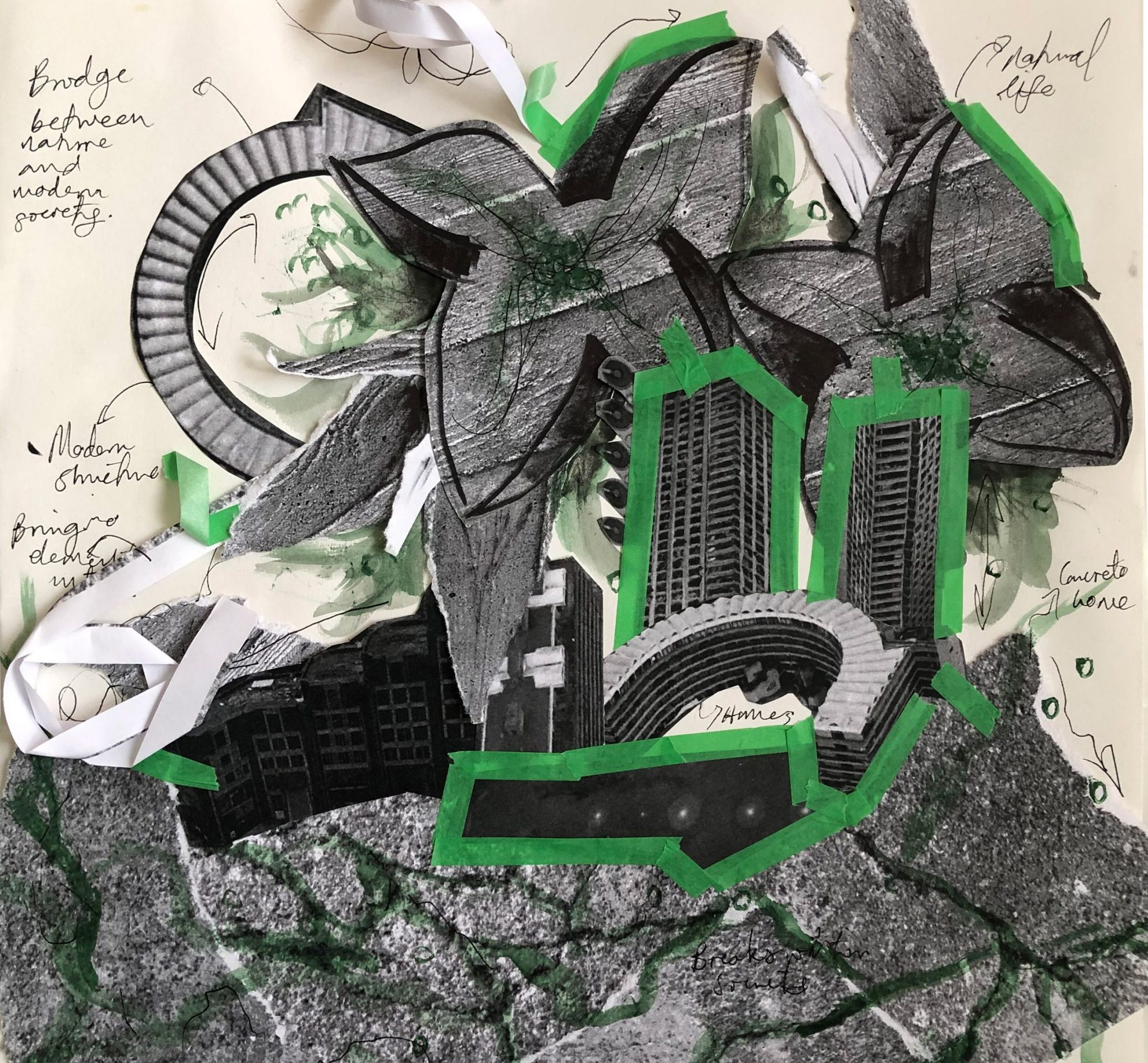 “Accelerate was one of the best opportunities I have ever signed up for. I initially heard about the programme from my teacher. At the time, I was remotely interested in pursuing a career in architecture. However, after attending the programme, I now know that architecture is my preferred field. Architecture is more than building buildings. It’s creating communities.” 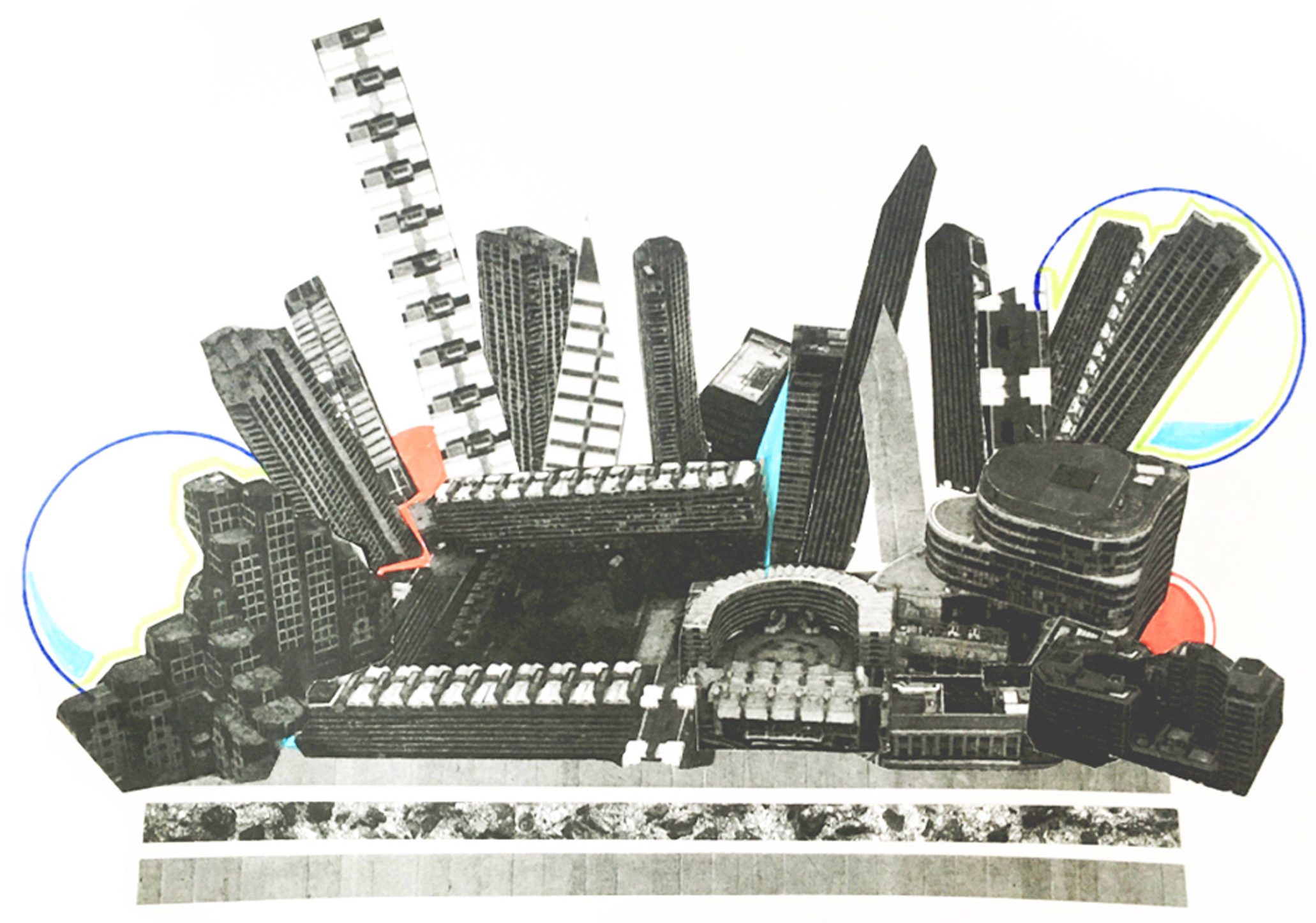 “Accelerate has taught me a lot about myself as much as the surrounding environment. I have discovered that I am drawn to more classical architecture and the past. When we walked past the London Wall on our first visit to the Barbican, I was completely in awe of the history behind it.

“It has been incredibly fascinating to discover London from angles I had not previously explored. We were encouraged to analyse the surrounding spaces through a different set of perspectives by viewing them through the lenses of improvement and interventions. I believe this way of constantly assessing how things could be improved will stick with me for my entire life.”

This school show is a partnership between Dezeen and Accelerate. Find out more about Dezeen partnership content here.