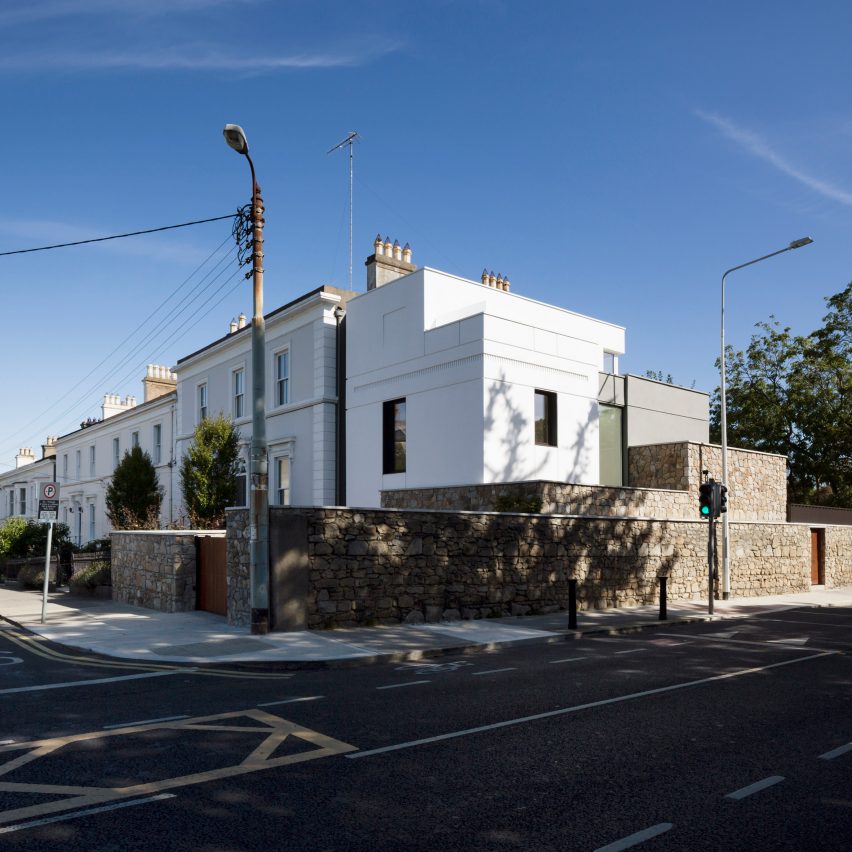 Studio 304 architects Gary Tynan and Claire Lepoivre have built themselves a family home in Dublin, which blends Georgian styling with modern details.

Corner House is a three-storey, four-bedroom house built at the end of a terrace in a conservation area in Monkstown.

Although it is a contemporary house, Tynan and Lepoivre have made the building feel appropriate for its setting by matching the proportions of its Georgian neighbours.

Not only do the tiers of Corner House correspond with those next door, but it also features various details that are typical of 18th-century houses. The windows are tall and deep-set, while a second-floor terrace has been designed to look like quoins.

The building is also slightly set back from the existing facade, as a mark of respect to the existing architecture.

“I wanted to build something that was specific to the site,” explains Studio 304 founder Tynan.

“The new house is set back so that the quoins of the existing terrace can be read,” he told Dezeen, “and the upper volumes of the house are broken down into proportions similar to those quoins. They are intended to express solidity and anchor the building to the corner, as the quoins do.”

The cladding materials were similarly chosen with the setting in mind. The lower level of the house is clad in granite, matching an existing boundary wall that was repaired as part of the project.

Meanwhile the upper levels are rendered and painted in two different shades: white at the front, and grey at the back.

“Typically in this conservation area, the fronts of the older houses are painted and have plaster details, while the rear is usually left in natural render colour (grey). So the new house follows this logic also,” said Tynan.

The windows are lined with metal to emphasise the deep reveals. “It felt important to me that the windows had a sense of depth,” added Tynan.

Inside, the 190-square-metre building is organised around a central hallway and staircase, which dissects the floor plan. This space is flooded with natural light, thanks to a generous south-facing window above the entrance and a skylight over the stairwell.

On the ground floor, rooms include a large kitchen and dining room that opens out to the garden, a more intimate living room and a separate utility room. The first floor contains three bedrooms, including one en-suite, while a fourth bedroom is located on the smaller second floor.

The interior combines simple detailing with some playful flourishes. These include cast concrete washbasins in shades of pink and green, and a series of decorative friezes that create patterns of light and shadow.

“One of the advantages of building your own house is that you have an opportunity to test ideas and experiment,” said Tynan.

“These friezes were experiments in using a CNC machine to route flutes into sheets of engineered timber.”

Tynan founded Studio 304 in 2015, while Lepoivre joined the studio later. The office has completed a handful of projects since then, including a house extension with a sunken bath, which was named best house extension in London in the Don’t Move Improve awards in 2017.

Although Tynan grew up in Dublin, he and Lepoivre have been living in London for the past decade. With the completion of Corner House, Tynan, the couple and their two daughters have been able to relocate.

Photography is by Aisling McCoy.

The post Studio 304 designs Corner House to fit in with its Georgian neighbours appeared first on Dezeen.