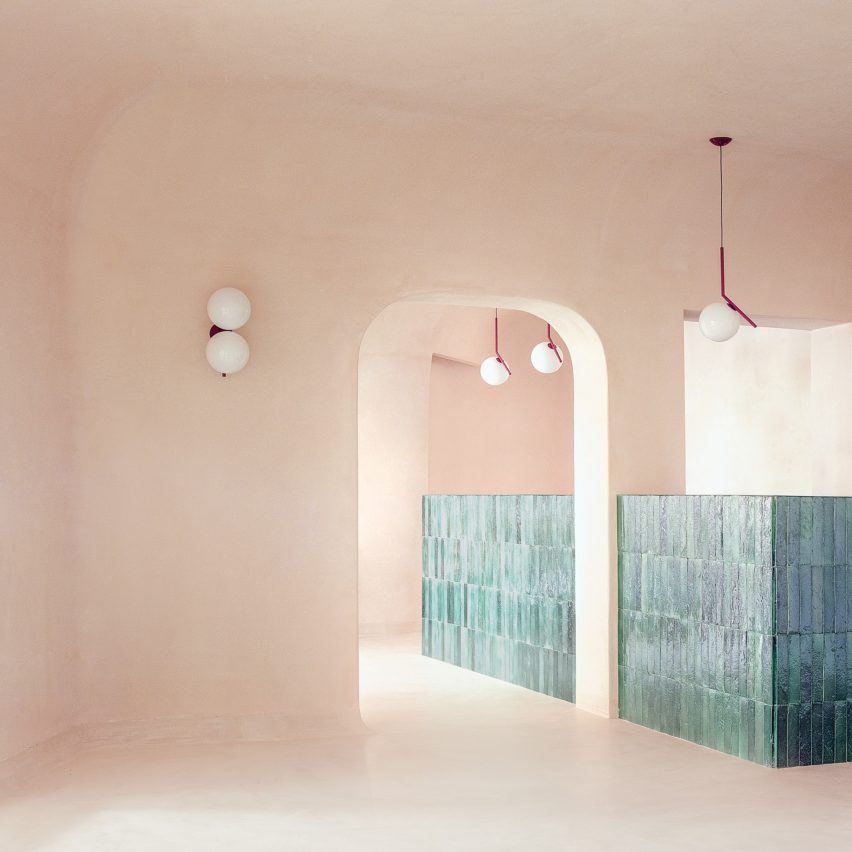 Studio Wok has completed Myrto, a pizzeria on Sardinia that is designed to reflect the island’s earth tones and wind-swept granite rocks.

Located in the town of Porto Cervo on the Costa Smeralda, the restaurant resembles a cave with curved, sandy pink plaster walls, cement floors and arched window openings.

The interior is a “tribute to the essence of” the region, explained Studio Wok.

“When we think of this part of Sardinia, we think of granite rocks shaped by the wind,” the practice said.

“The power of the wind erodes and carves out the granite formations, turning them into architectural structures that can be lived in. The restyling project for the Myrto restaurant is an opportunity to pay tribute to this area and to tell its story.”

The “homely and intimate” space is minimally furnished with custom pieces, such as a tiled counter rendered in different hues of green to echo the colour of local scrubs.

These cooler tones are contrasted against burgundy-coloured lights, designed by Michael Anastassiades for Flos, which are used throughout the restaurant.

A large outdoor patio at the rear of the space is treated as an extension of the interior. Here, strips of fabric form a permeable roof that reacts to the wind and provides a glimpse of the sky beyond.

Studio Wok, which was founded by Marcello Bondavalli, Nicola Brenna and Carlo Alberto Tagliabue in 2012, has previously converted a barn with pebble walls into a country home.

Other cave-like bar and restaurant interiors featured on Dezeen include this wine shop in Spain by Zooco Estudio, where architectural elements based on wine bottles and barrels create a contemporary vaulted ceiling.

Meanwhile in Mexico City, local firm Michan Architecture hung a pair of huge concrete lights over the bar of a restaurant to create a cavernous atmosphere.

Photography is by Simone Bossi.