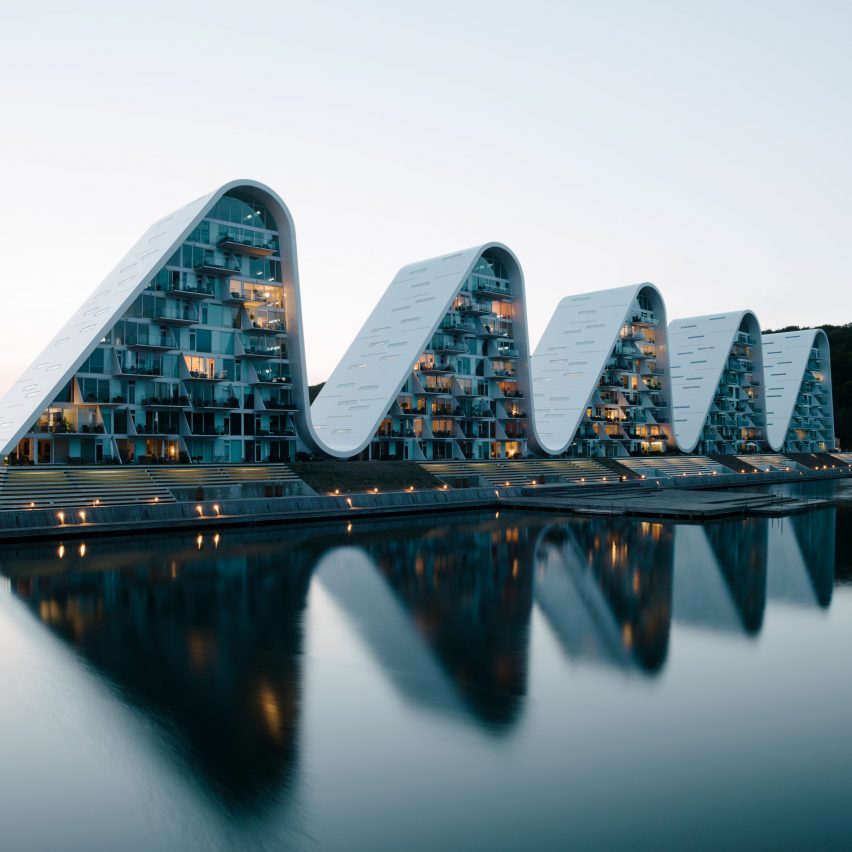 As BIG and Barcode Architects’ recently revealed Sluishuis building demonstrated, housing blocks don’t have to be cuboid. Here is a roundup of 10 unusually shaped apartment buildings.

Advancements in engineering mean architects are able to explore ever-more-outlandish massing in their residential projects.

The examples below use cantilevers, stilts and other construction techniques to ensure they stand out on the skyline:

The angular Sluishuis block, by Danish studio BIG and Dutch studio Barcode Architects, reaches out over the IJ Lake in Amsterdam on a double cantilever. Completed this month, it contains 442 owner-occupied and rental apartments.

BIG is no stranger to creating unusually shaped housing blocks, with the studio’s tetrahedron-shaped Via 57 West in Manhattan another notable example.

Find out more about Sluishuis ›

As its name suggests, Fake Hills in the port city of Beihai resembles a horizon of rolling topography with its undulating roofline. It was designed as an attempt to stand apart from the standardised housing blocks that often dominate Chinese skylines.

Beijing-based studio MAD has included facilities that respond to the building’s unique shape, from rock-climbing walls in the vast hollows cut into its facade to tennis courts, gardens and swimming pools on the flatter parts of the roof.

Find out more about Fake Hills ›

The slopes of the roofs at the Ilot Queyries development in Bordeaux vary between 14 degrees and 45 degrees, depending on their relation to the sun.

They form part of an irregular layout that was carefully arranged by Dutch studio MVRDV to maximise natural ventilation and light across the whole site, with low-rise buildings in one corner to match the neighbouring buildings. At another end, nine-storeys blocks overlook the River Garonne.

Find out more about Ilot Queyries ›

The Wave, Denmark, by Henning Larsen

Five crests that run like a rollercoaster along the waterfront of the Vejle Fjord define The Wave, and contain 100 apartments across the nine-storey volumes.

The building was the vision of prolific Danish architect Henning Larsen, who passed away in 2013 before it was finished. His studio saw the project through to its completion after an 11-year construction process held up by the 2008 financial crisis.

Find out more about The Wave ›

The Building Descending the Stairs, Italy, by Elasticofarm and Bplan Studio

The Building Descending the Stairs is a slouching arc of 47 holiday apartments hoisted above a piazza on angular metal stilts.

Overlooking the Venetian Lagoon in Jesolo, it was designed by architecture firms ElasticoFarm and Bplan Studio to frame sea views for residents without blocking those of its neighbours.

Find out more about The Building Descending the Stairs ›

Intended to encourage residents to embrace the outdoors, the Montpellier block is modelled on the shape of a tree and is characterised by its many cantilevering balconies that fan out like leaves – some more than seven metres long.

Find out more about L’Arbre Blanc ›

Completed in 1973, the brightly-coloured La Muralla Roja by late Spanish architect Ricardo Bofill is by far the earliest example of an unusually shaped housing block in this list.

The housing estate, at the top of a cliff on Spain’s Calpe coast, is fortress-like in form, with complex geometric internal stairs and circulation routes reminiscent of the paintings of MC Escher.

One of the more unusually-shaped buildings of this roundup, Busan Times is a four-storey concrete housing block designed by South Korean architect Moon Hoon to resemble an owl.

A concrete frame extending out from a large window in the uppermost apartment is intended to represent the bird’s face, with the two openings at either side glowing like eyes at night time. The wing is depicted by a vertical volume with a sliced corner that protrudes from the eastern side of the building.

Find out more about Busan Times ›

XS House in Philadelphia‘s Chinatown is exceptionally slender, fitting seven apartments onto a plot of land about the width of a parking spot.

Find out more about XS House ›

The development is part of the Battersea Power Station regeneration and is made up of two buildings containing more than 300 homes combined, with no two flats the same.

Find out more about Prospect Place ›

The post Ten apartment blocks that break the mould with unusual shapes appeared first on Dezeen.