Here are 10 key projects by Burkinabè architect Diébédo Francis Kéré, who has been named this year’s laureate of the prestigious Pritzker Architecture Prize.

“He has served as a singular beacon in architecture,” said the Pritzker jury. “He has shown us how architecture today can reflect and serve needs, including the aesthetic needs, of peoples throughout the world.”

Read on for 10 of Kéré’s key projects:

Kéré began raising money to build a primary school in his home village while studying in Germany. The Gando Primary School was Kéré’s first major project and was built with the help of local villagers. It was awarded the Aga Khan Award for Architecture in 2004.

In 2008, two years after the Gando Primary School was completed, Kéré began a major extension that created space 120 additional students. It was constructed using local labour as well as local materials.

To mark the 50th anniversary of the independence of Mali, Kéré added a collection of buildings to the National Park in Bamako with the aim of uniting the neglected botanical and zoological gardens.

Each of the structures was clad in natural stone provided ample shaded areas for its visitors. Along with an entrance pavilion, the structures house a restaurant and sports centre.

The medical centre was designed with an adaptable structure that incorporated passive ventilation, solar energy systems as well as water collection and management systems.

Built as a collection of modules arranged along a central street, the Léo Surgical Clinic & Health Center includes surgical facilities, an in-patient ward and a maternity unit that serves a population of over 50,000 people.

It was constructed using rammed earth bricks with protruding, colourful bay windows that are located at different heights across the facades of each module. Large overhanging roofs provide protection against the sun and are fitted with rainwater collection systems for irrigation use.

The C-shaped Lycée Schorge Secondary School was designed for a site on the outskirts of Koudougou. It is comprised of a collection of nine connected modules that are arranged in a C-shape formation. Each of the modules houses the secondary school’s classrooms, administrative facilities as well as a dental clinic.

Kéré used locally sourced materials such as laterite stone throughout the construction process to convey that local materials can be used within contemporary structures. 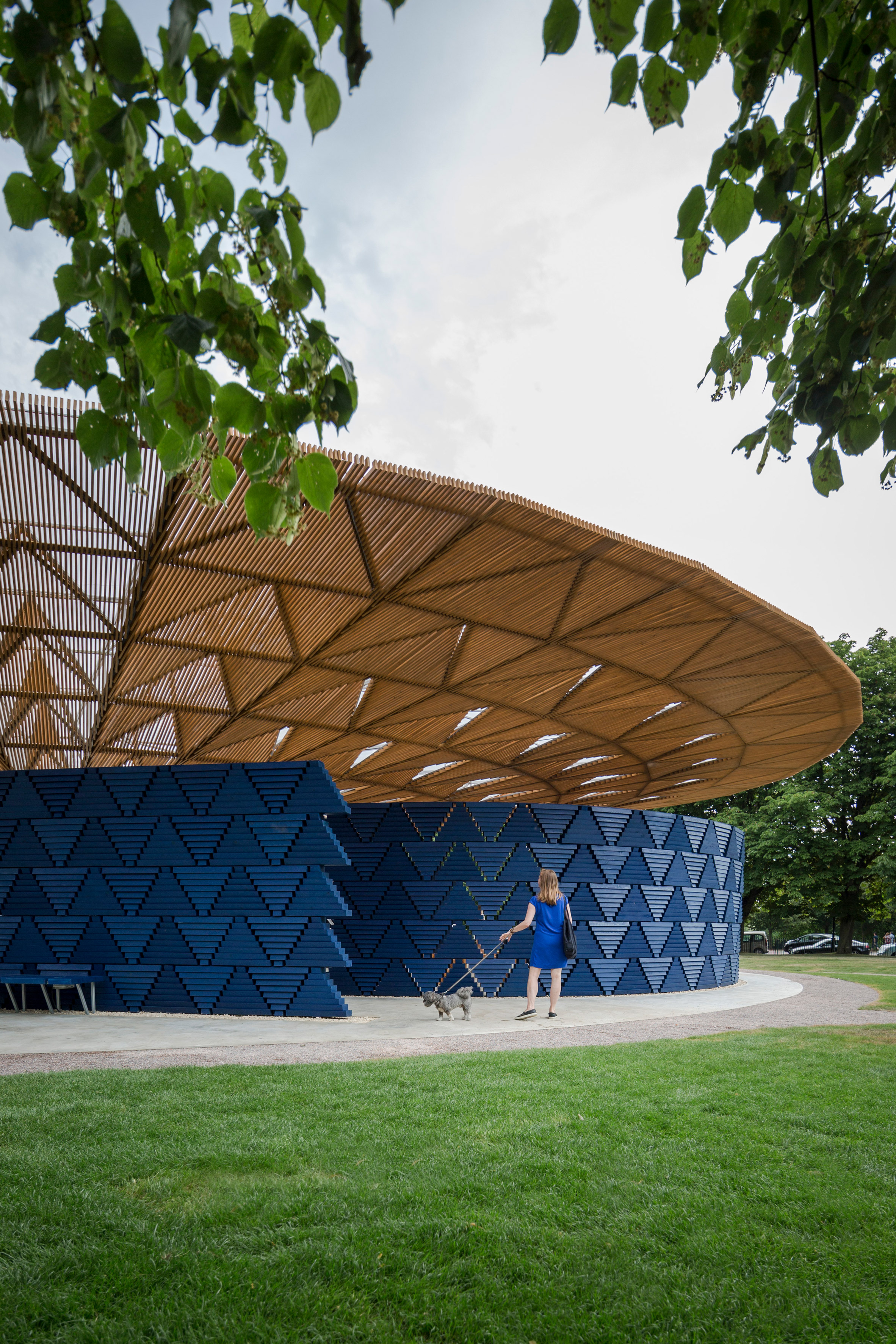 The Burkinabè architect designed a indigo-blue structure with a latticed canopy and courtyard at its centre for the 2017 Serpentine Pavilion.

The pavilion is marked by curving sections of indigo-hued walls and an inverted latticed canopy with an opening at its centre, which was designed to funnel rainwater into a waterfall.

Find out more about Serpentine Pavilion ›

Dead trees were used to construct this pavilion at Montana’s Tippet Rise Art Center. Masses of local ponderosa and lodgepole pine logs, which were felled during natural pruning processes, were arranged into groups to form the roof, columns and seats of the Xylem pavilion.

The 256-square-metre pavilion was informed by traditional toguna – a shelter typically found in Dogon culture, local to West African countries including Mali and Burkino Faso.

Find out more about Xylem pavilion ›

The campus was built for the non-profit organisation Learning Lions to offer young Kenyans free training in information and communication technologies.

The design for the new Burkina Faso National Assembly was put forward by Kéré following the 2014 Burkinabè uprising, which saw the original parliament set ablaze.

The giant pyramidal structure will provide a public meeting space in the heart of the city where visitors can experience panoramic views of the city. The Benin parliament building is set to be built in the country’s capital Porto-Novo and will mimic the form of tree canopies with a top-heavy structure.

The structure was designed to embody the democratic values of the people of Benin and also pay homage to palaver trees, which were traditionally used by west African communities as accessible spaces to hold public gatherings, meetings and community events.

Find out more about National Assembly of Benin ›