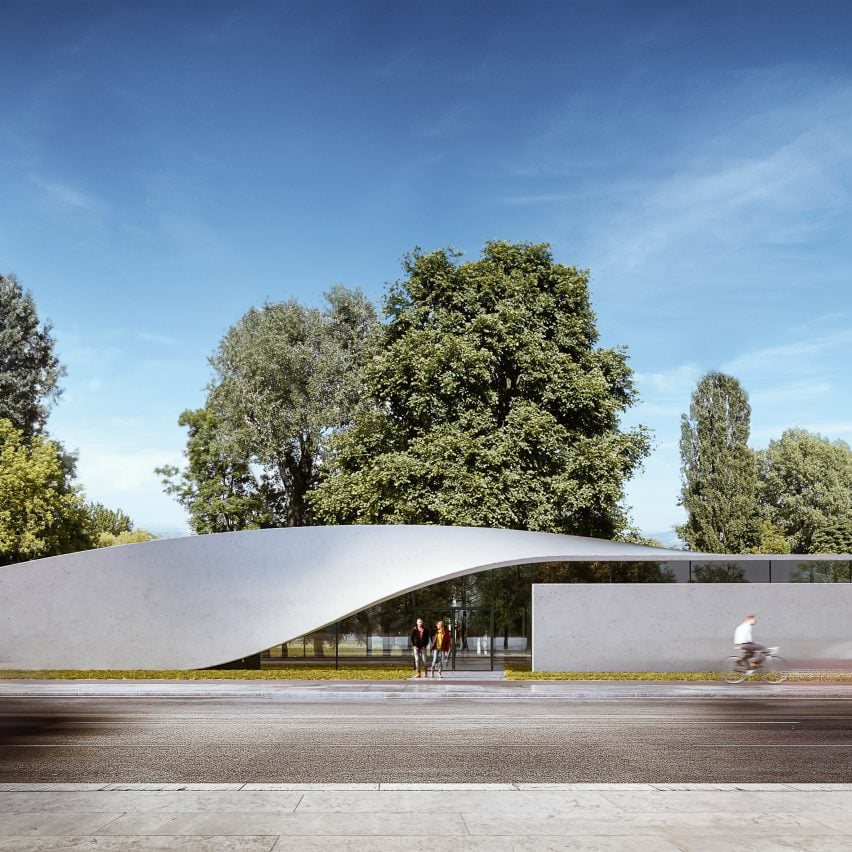 Researchers at the Technical University of Dresden have been working with German architecture firm Henn to create the first concrete building to be reinforced with carbon fibres instead of steel.

Currently under construction at the TU Dresden university campus in Germany, The Cube is billed as the “world’s first building made of carbon concrete”.

The concrete is strengthened with carbon fibre yarn, which is made by binding together many carbon fibres – ultra-thin threads of almost pure carbon crystals – using a process of thermal decomposition called pyrolysis.

These yarns are used to create a mesh that the concrete is poured onto.

According to Henn, the resulting material is four times stronger than regular concrete, but also four times lighter, due to the reduced structural sections.

The carbon-fibre mesh is also rust-proof, unlike steel, meaning carbon concrete has a longer lifespan than typical reinforced concrete. This also means structures can be much thinner since much of the thickness of steel-reinforced concrete is due to the need to prevent water penetration leading to oxidization of the rebar.

Henn designed The Cube in collaboration with the Institute for Solid Construction at TU Dresden, led by professor Manfred Curbach.

With a wall that folds up to become a roof, the building’s form takes inspiration from the lightweight and flexible properties of carbon fibre.

“The design of The Cube reinterprets the fluid, textile nature of carbon fibres by seamlessly merging the ceiling and walls in a single form, suggesting a future architecture in which environmentally conscious design is paired with formal freedom and a radical rethinking of essential architectural elements,” said Henn.

“The wall and ceiling are no longer separate components but functionally merge into one another as an organic continuum.”

The building will be a showpiece for a major TU Dresden research project called C³ – Carbon Concrete Composite, which is backed by the German Federal Ministry of Education and Research. The aim of the project is to explore the potential uses of this new material in construction.

“The benefit is that you can make the concrete much thinner while being able to carry heavy loads,” said senior carbon scientist Dr Erik Frank in a recent interview with Dezeen.

“So you can design completely different shapes. There are some research examples of super-thin concrete building components or benches or reinforcements. The aim is to get away from the huge amounts of concrete that are being used today.”

However, the carbon footprint of carbon fibre is “is usually very bad,” according to Frank. The researcher is currently exploring ways of creating carbon fibres from lignin, a common plant-based substance, which is also a byproduct of the paper industry.

He predicts that bio-based carbon fibres won’t replace petroleum-based ones, as they don’t yet offer the same performance. However, he expects demand to continue to increase. “It will just be a second market running alongside,” he said.

The post The Cube will be "world's first building made of carbon concrete" appeared first on Dezeen.