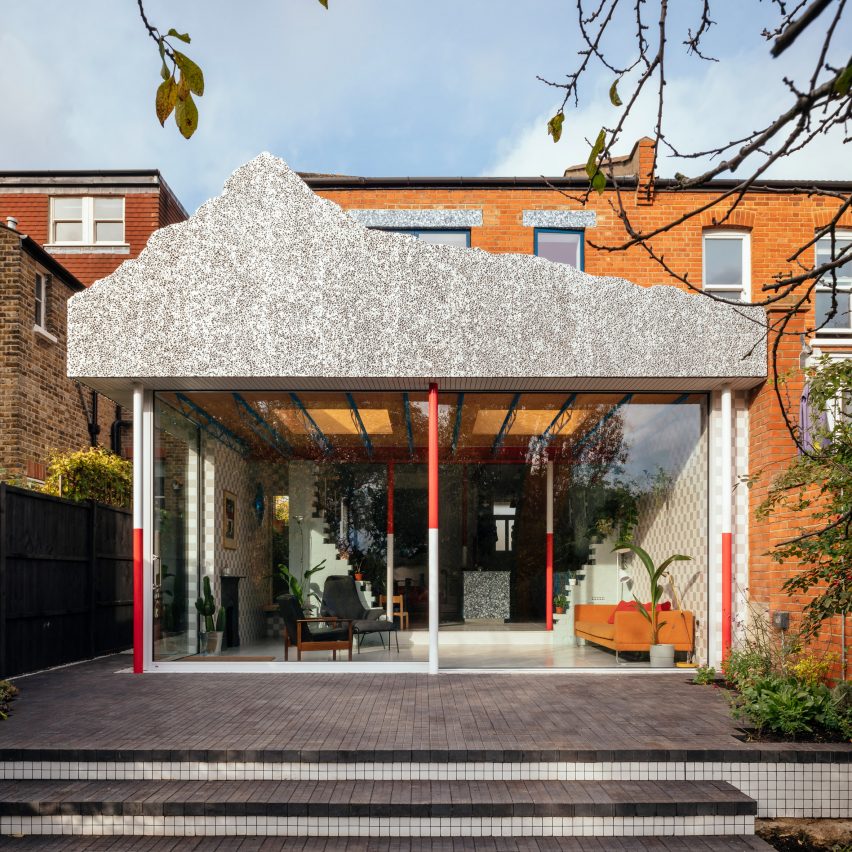 This week on Dezeen, RIBA unveiled the 20 homes vying to be named 2022’s House of the Year.

An annual award bestowed by the Royal Institute of British Architects (RIBA), the House of the Year prize recognises the body’s best one-off architect-designed houses or extensions in the UK.

Among the 20-strong longlist is s a residential extension informed by a fake Disneyland mountain by CAN (pictured top), a rectilinear converted barn in West Sussex by Sandy Rendel Architects and a house extension by Will Gamble Architects built inside ruined stone walls.

The life and career of Dezeen founder Marcus Fairs, who passed away suddenly last month, was remembered in an obituary written by Justin McGuirk, who is chief curator at London’s Design Museum.

“He remained engaged at every level to the very end,” wrote McGuirk. “One can only speculate what his next project would have been but one took it for granted that there was another chapter to come.”

This week we also highlighted the world’s first operational “sand battery”, which stores heat within a tank of sand.

Created by Finnish firms Polar Night Energy and Vatajankoski, the battery provides a low-cost and low-emissions way to store energy because it is able to store heat for up to months at a time.

The project will include repaving the square with stones cut to the same size as the floor tiles inside the cathedral and transforming an abandoned underground car park into a visitor centre.

In architecture news, BIG and Barcode Architects unveiled a cantilevered housing block named Sluishuis, which was built on an artificial island in Amsterdam’s IJ lake.

In total, the block contains 442 apartments that surround an internal harbour.

Welsh startup Space Forge announced the design of its ForgeStar-0 satellite, which the company says will make electronic components and materials in space that are “impossible to manufacture on Earth”.

The satellite is scheduled to launch from the UK’s first domestic spaceport later this year for the purpose of testing its return capabilities.

“The ForgeStar platform that we are building is a flexible modular satellite consisting of an orbital module and an interchangeable microgravity capsule,” Space Forge co-founder Joshua Western told Dezeen.

We also featured our selection of 10 garden studios from around the world that are spotlighted in Work From Shed, a book published by Hoxton Mini Press.

The book was prompted by the coronavirus pandemic, which has seen a seismic shift in where people work – often including garden sheds.

Among our top projects are an artichoke-shaped studio in London by Studio Ben Allen and Tini, a prefabricated cabin in Spain by Delavegacanolasso that is designed to arrive assembled and ready to be placed on a plot of land.

Popular projects this week include Ngarannam village in northwest Nigeria that was designed by architect Tosin Oshinowo to replace a settlement destroyed by the Boko Haram terrorist group, as well as Di Frenna Arquitectos’ rammed earth-house in Mexico and a medical centre in Brazil by Safdie Architects oriented around a large glass atrium.

Our most recent lookbooks showcased bathrooms with timber-clad interiors and eye-catching pink kitchens that use the colour in unexpected ways.

The post This week we revealed the UK's best homes appeared first on Dezeen.