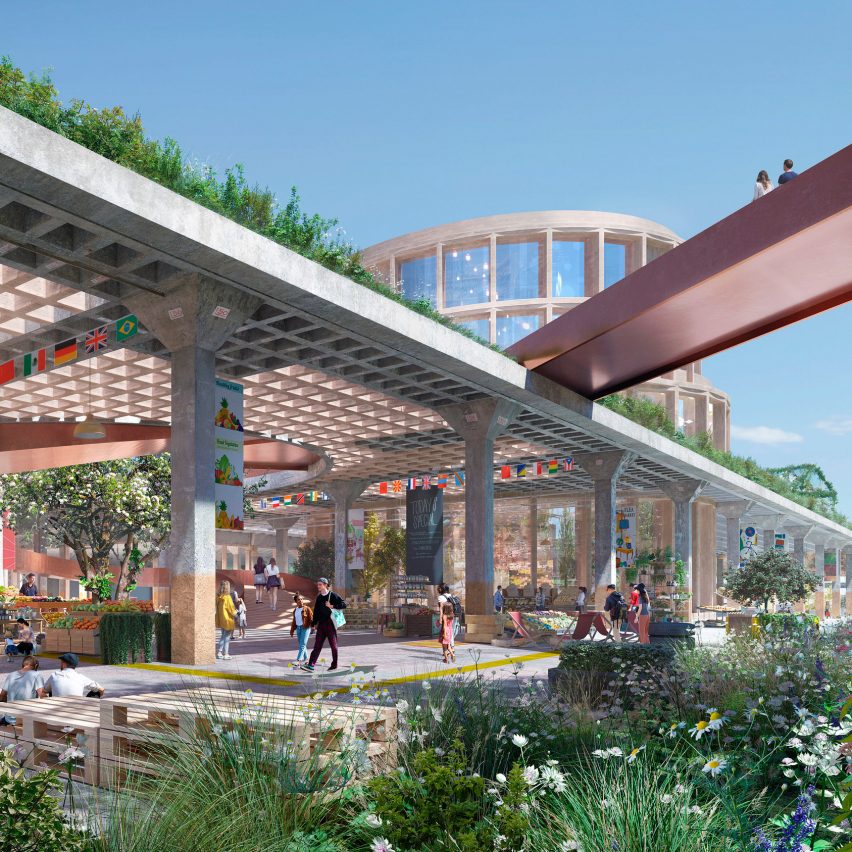 Danish studio Henning Larsen Architects, local studio KPMB and landscape architecture studio SLA are set to convert an airstrip outside of Toronto into a residential district.

Downsview Airfield, 15 kilometres northwest of Toronto, will be turned into a residential and commercial district with strong transport connections to the city.

The development will be arranged around the two-kilometre-long runway, which will be turned into a “pedestrian corridor” that links the communities built within the 520-acre site.

Ten districts housing around 80,000 people in mostly single-family residences will be spread out on the perimeter of the pedestrian corridor within 40 hectares of parks for new residents as well as locals in the surrounding neighbourhoods.

More than one million square metres of commercial space will be added to the site. The plan recommends that historic buildings such as an airport hangar be repurposed.

The three core studios interacted with over 3,000 people in their development of the master plan to ascertain what locals would like to see in a new development. Construction of the district will take place over the next 30 years.

The plan outlines the greenspace and redevelopment of the railroad along with the implementation of the districts, but the official number of buildings on the site has yet to be approved by the city.

Situated at the confluence of two ravines, the community will connect to an adjacent park as well as the city’s transit system, allowing future residents to commute easily into the city.

Having the park built along the runway allows for flexibility as the district’s plan evolves, according to the studios.

“You start with water and parks and biodiversity,” said Bridgman.

“You don’t start with blocks and buildings, you start with what matters to people and what is going to be there much longer than the buildings and the people.”

Sorensen named Paris and Barcelona as examples of cities with high densities that do not have large numbers of high-rise buildings.

“We haven’t invented anything new,” he said. “We’ve just taken kind of the best of all worlds, and now put them together into a new framework.”

“So this is almost quite the opposite of suburbanization,” he added.

Using the 15-minute city model, the plan allows for a connected community that anticipates a car-free future.

“That’s the next level of district planning that really supports this overall approach to planning and there, you will really start to see you know how the streetscape start to develop, how the files are structured and how the abilities start to them and how they importantly, interact and kind of stitch everything together,” said Sorenson

Bridgman, who is familiar with the strict building codes in Toronto, said that the orientation of the airfield will make for a more ideal living environment.

The airfield, which is oriented with the wind, allows for a reconsidered grid that shapes the plazas and lots in a way that can “really harness the sun”. 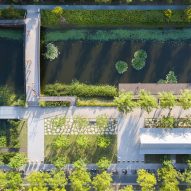 The studios agree that the multi-generational aspects of the project will allow for flexibility in design as trends change.

“It’s gonna be exciting to see how with future generations this will grow organically as a place of design experimentation,” said Bridgman.

The framework plan follows a series of other massive city planning initiatives that seek to create new communities on unused lands. This year, the Saudi Arabian government revealed the designs for The Line – a 500-kilometre-long linear city meant to house nine million people.

Recently, an influx of developments designed by international firms have been announced in Toronto. Adjaye Associates, Alison Brooks Architects and Henning Larsen are set to contribute buildings to a sustainable development along the city’s waterfront.

The post Toronto airfield to be converted into district that aims to be "the opposite of suburbanization" appeared first on Dezeen.