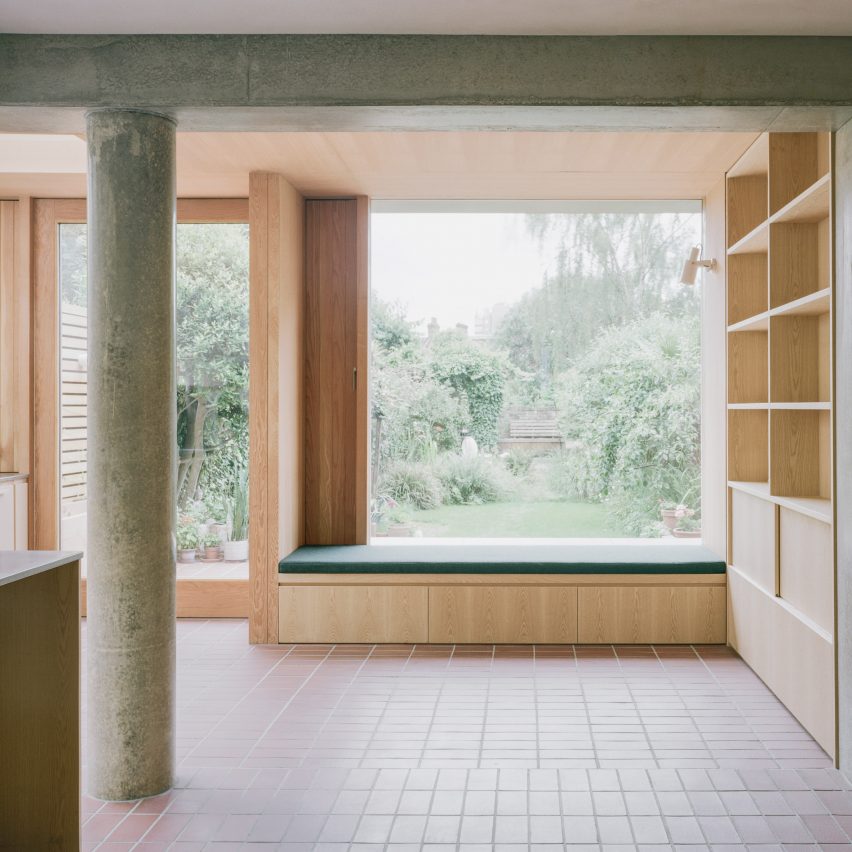 Raw concrete, burnt clay and natural wood come together in this extension to an end-of-terrace house in south London, designed by architecture studio TYPE.

TYPE‘s design centres around simple, quality materials that can be left exposed, so they don’t need external finishes.

Details include an exposed concrete structure, lime plaster walls, a floor of quarry tiles and furniture elements made from ash and Douglas fir.

The owners – a family with young children – chose to work with TYPE after seeing photos of a project where the studio had taken a similar approach. Their aim was to create a space with natural warmth and durability.

“Using natural materials such as timber brings a warmth and lightness to the space, something which the clients had particularly liked in our previous work,” said Ogi Ristic, one of the studio’s four directors.

“The material palette gives the project a soft and subtle earthy tone that feels warm and inviting,” he told Dezeen.

Combing a rear and side extension, the structure was treated as a series of layered components, which gives a natural hierarchy to the way that materials join one another.

The first layer is the concrete frame supporting the existing structure, which is celebrated through the addition of a cylindrical column – the only curved element in the room. 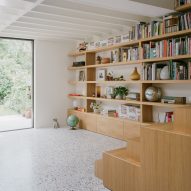 The second layer is the ash-lined box that forms the walls of the extension, creating a clear contrast between the new and old parts of the Victorian building.

The third layer is a three-dimensional facade built from Douglas fir, featuring a large picture window with built-in bench seats on either side, both inside and out.

A kitchen and breakfast bar made from ash wood occupies the side extension, lit from above by a large skylight. Douglas fir joists slot in underneath the glass, offering a sense of depth.

The space of the original kitchen becomes a dining area, while the picture window creates a natural lounge space. The bench seat is upholstered, and an adjoining bookshelf integrates a fold-out seat that can be used by the family’s children.

The circulation of the space is also improved thanks to a new internal doorway connecting the kitchen with the living rooms at the front of the house, and a large pivoting door that leads out to the garden.

“The original kitchen was poorly laid out, which meant there was a disconnect with the dining room, living area and garden,” said Ristic.

“The biggest priority was to reestablish these connections through a few simple moves.”

The studio primarily works on residential renovations, conversions and extensions, with past projects including Redhill Barn, a conversion of a ruined 200-year-old stone shed in Devon.

The studio aims to reorganise homes when possible, as Ristic advises that extensions aren’t always the answer – often homes can be improved by simply improving what is there already.

“Many homes may be sufficiently large but are inefficiently laid out, making it appear that extending is the only way forward,” he said.

“Our approach is always to see how far we can reorganise the home so it works better, and we can build less. This allows more to be invested in retrofitting the existing building with additional insulation, upgraded glazing and heating systems.”

Photography is by Lorenzo Zandri.