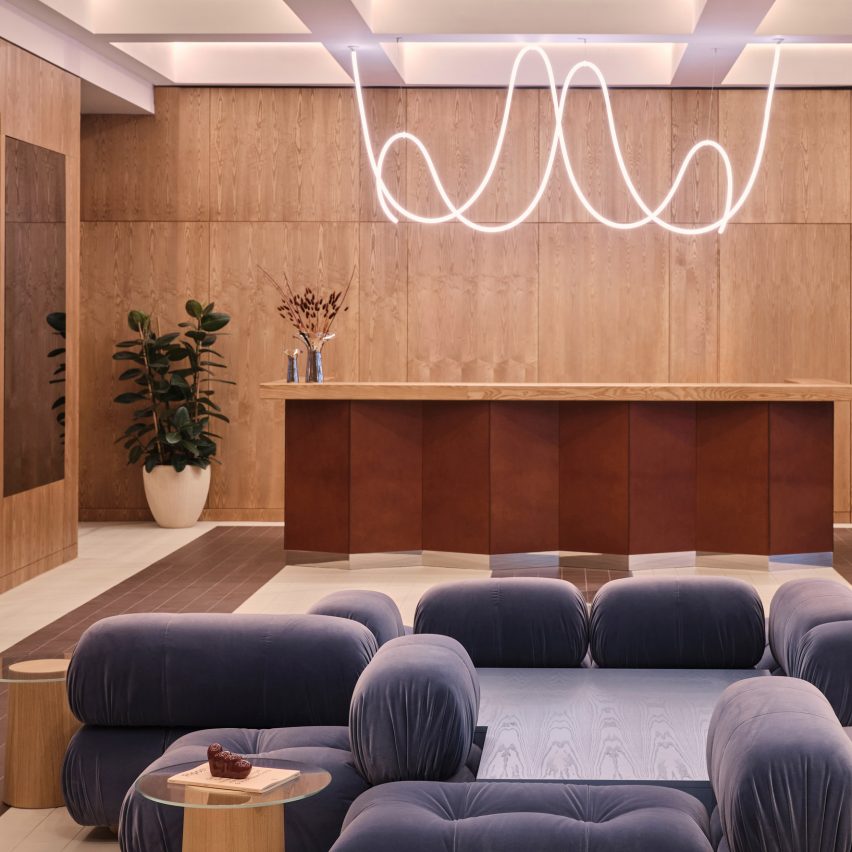 London-based Universal Design Studio‘s interiors for The Office Group‘s latest workspace in Euston was informed by nearby buildings including the British Library.

Called 210 Euston Road, the interior was created by Universal Design Studio together with workspace provider The Office Group (TOG’s) head of design Nasim Köerting, and nods to the many well-known institutions that are located in the same London neighbourhood.

“Quite simply, the design was inspired by the location,” Köerting told Dezeen. “210 Euston Road is flanked by a host of influential national institutions, including the British Library, the Royal College of Physicians and the Wellcome Trust.”

“These illustrious neighbours inspired our ambition to create a classic yet contemporary institution-like space that references the surrounding centres of learning and knowledge,” she added.

The 6,400-square-metre, seven-storey building was redeveloped to create more than 800 workspaces.

Its ground floor houses a cafe that is open to the public, as well as a large reception and a residency space.

Two of the building’s upper floors will be used as offices for individual businesses, while other floors have smaller office units as well as co-working spaces.

To create a space that would be made to last and “reference an institution but not be institutional”, the designers looked to the architecture of buildings including the British Museum and University College London, Universal Design Studio associate director Carly Sweeney explained.

“One of the hero points of the design references the traditional reading room that is found in these spaces – a library arguably being the original coworking space,” she said.

“To echo this we created a hidden coworking lounge – this space cannot be seen from the outside and the hidden nature lends to the feeling of privilege to be there. “

To give each space in the large building a different feel, Universal Design Studio worked with a material palette that changes as the floors ascend, culminating in a members’ bar on the seventh floor that has a tiled bar and a ceiling made of tactile cork.

“The public-facing ground floor is light and airy, with a ‘library’-style interior that features a cork floor, timber screens, bespoke reading lights and leather detailing on the desks,” Sweeney told Dezeen. 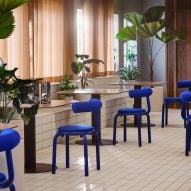 “As you travel up through the building, the seventh floor feels much more like a members’ club,” she added.

“This space is more luxurious, there is again an abundance of light here so to create a contrast we used a darker palette. There is rich material tactility via the tiled island and upholstery.”

Universal Design Studio’s references to the surrounding buildings in the Euston area are perhaps most notable on the ground floor, where a decorative neon light installation above the reception desk draws to mind the neon installations in the windows of the Wellcome Collection across the road.

In a meeting room next to the lobby, decorative sculptures and vases seem to nod to the nearby British Museum, while a collection of oil paintings on the wall will be regularly replaced, like in a gallery space.

The studio also added an unusual undulating ceiling to the library-style ground floor room, creating an eye-catching detail in the room, which has an otherwise muted design with cream and wood colours.

“As with other noteworthy institutions we wanted to create a moment that makes anyone entering the space feel grounded,” Sweeney said.

“It is cathedral-like in its stature but also cocooning,” she said of the ceiling.

“It allows for a change of pace in one of the most special spaces in the building. Similar in nature to other institutions such as the ceiling in the British Museum, it also creates a ‘moment’ upon entering the space.”

The building is the first TOG workspace to open since the coronavirus pandemic began and its design aimed to reflect the changing needs of the workplace once people began coming back to the office.

“We landed on the aim to create an environment that one couldn’t replicate in the home – a space that could attract people back to the workplace without compromising freedom and flexibility,” Köerting said.

“We achieved this by providing plenty of choice and myriad amenities.”

Universal Design Studio also created the lobby for a Hopkins Architects-designed office in the City of London, which features railway-informed terrazzo tracks on the floor.

Other TOG locations in London include a workspace close to department store Liberty and a 1930s building with pops of colour designed by Note Design Studio.