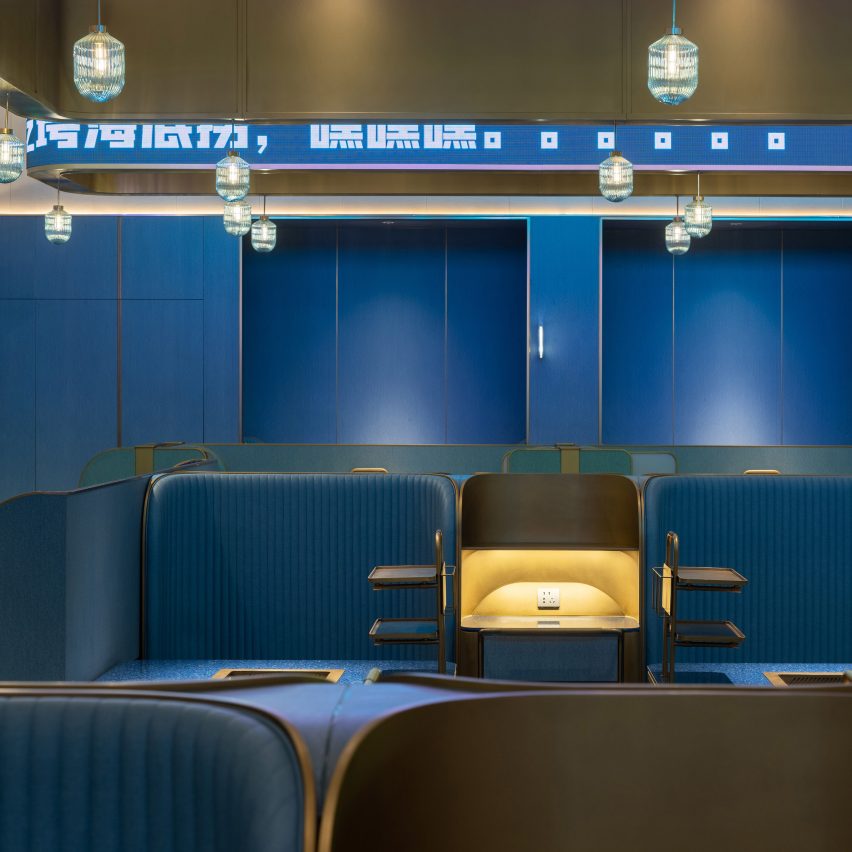 Shades of blue and green feature throughout this hotpot restaurant in Shenzhen, which has been updated by Chinese studio Vermilion Zhou Design Group.

Haidilao, which was established in 1994, is the biggest hotpot restaurant chain in China, with overseas branches in cities such as London, New York and Sydney.

When its Shenzhen location was in need of a revamp, Vermilion Zhou Design Group was brought in to lead on the design.

From the outset, the Shanghai-based studio knew it wanted to avoid the red and black colour scheme that has previously been used in Haidilao restaurants.

The space has instead been decked out in shades of blue and green that are meant to nod to the chain’s use of natural, fresh ingredients.

At the heart of the restaurant is a bank of sky-blue dining chairs accompanied by tables with flecked, terrazzo-style countertops.

Bands of shiny brass panelling have been suspended from the ceiling overhead, inset with LED ticker boards that project interactive messages to diners.

A large LED screen has also been integrated into Haidilao’s facade; it displays moving silhouettes of different people, hinting at the buzzing activity of the restaurant’s interior.

Around the periphery of the main dining room is a sequence of high-backed, jade-green booths that form intimate “cabins” where small groups can enjoy their meals.

There are also a number of cosy nooks designed to accommodate solo diners.

Towards the rear of Haidilao there is a drinks counter and a private dining room that can be hired out for special occasions. Tall pivoting doors help close the space off from the rest of the floor plan.

In keeping with the rest of the restaurant, it features jade-coloured walls and brass-edged furnishings.

Vermilion Zhou Design Group has created a small manicure bar within the restaurant’s entryway – not only is it meant to lure in more passersby, but it also gives prospective diners a fun way to kill time while waiting for a table.

The bar has been rendered blush-pink, boldly deviating from the restaurant’s colour scheme, and has a scallop feature wall.

Scalloped surfaces go on to appear in the customer bathrooms, which have been finished with oblong mirrors and terrazzo-like washbasins.

There are a number of visually striking hotpot restaurants across China.

Examples include Jin Sheng Long in Qinhuangdao, where diners sit among thick stucco partitions, and Xinhua Nufang in Chengdu, which perches on the edge of a lotus pond.

The photography is by Vincent Wu.