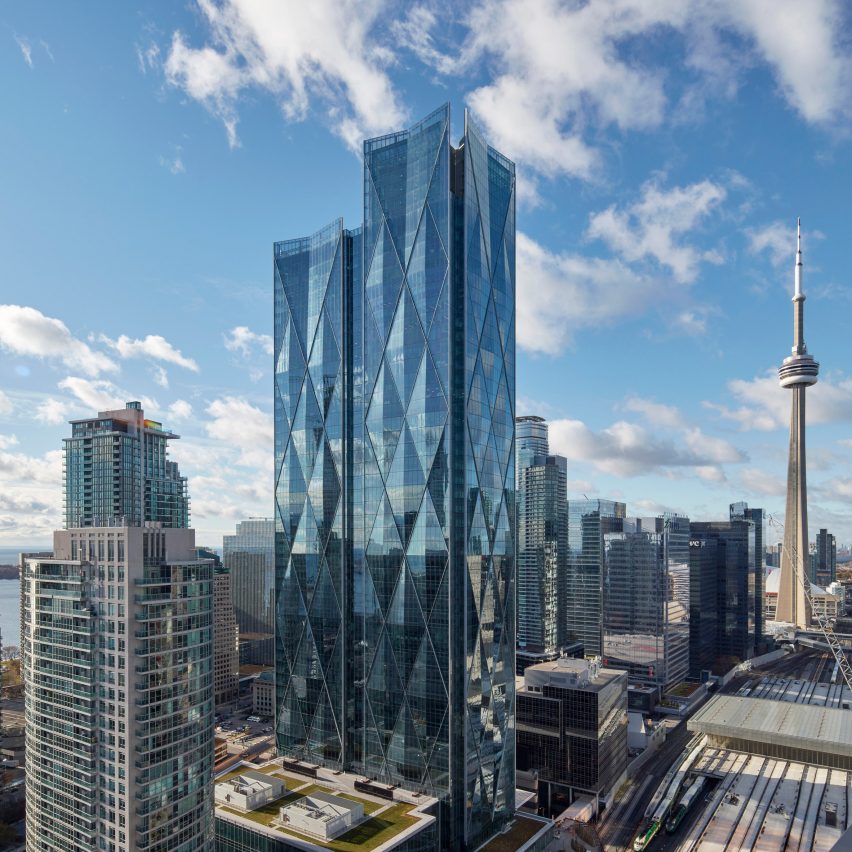 London architecture studio WilkinsonEyre has completed the CIBC Square skyscraper in Toronto, Canada, which is surrounded in undulating glass facades.

Created as the headquarters for bank Canadian Imperial Bank of Commerce, the 250-meters-tall skyscraper stands in Toronto’s central business district.

Named CIBC Square, the building has a glass facade that covers the distinct volumes that make the building look like it is two conjoined skyscrapers.

“This results in a stepped profile and an expression of a ‘crown’ to each building, which provides an interesting and dynamic addition to the skyline of Toronto,” WilkinsonEyre director Dominic Bettison told Dezeen.

Bettison said that the design of the three-million-square-foot CIBC Square was largely a response to the style of the nearby Toronto Dominion Centre, a series of towers designed by Ludwig Mies van der Rohe and completed in 1969.

“These facades express each floor with a pattern of horizontal ribbon windows and solid, dark metal spandrels which are repeated up the height of the tower,” said Bettison.

“Our facades offer a contrasting architectural expression with a vertical scale and modulation and an architectural language of repeated 10-storey-high ‘three-dimensional’ diamonds.”

The diamonds were designed to catch and modulate light in changing ways throughout the day to contrast the “brooding” towers typical of the area.

Bettison also noted that the shape of the exterior appears to float as a “veil” or “skin” above a more solid interior volume.

“The glass was carefully selected to provide sufficient reflectivity and in doing so captures dynamically the ever-changing sky condition,” he told Dezeen. 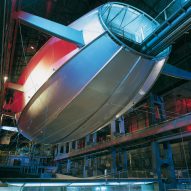 A second nearly identical skyscraper, which is set to be completed in 2024, will be built alongside the building to complete the development.

A fully landscaped one-acre public park was built four storeys above street level, which will eventually link both buildings.

The building also serves as a transit hub with a bus station in the podium with connections to Union Square, a busy transit station in Toronto.

In the lobby, the travertine and bronze metalwork directly reference Mies van der Rohe’s Toronto Dominion Centre, according to Bettison.“The stone cladding to the core walls has been designed as a three-dimensional relief, which is an abstraction of the exterior diamond facade system,” he said.

At the end of the main travertine corridors are counterposed walls made of translucent coloured glass designed to function as shoji screens, dividing the entry corridors from the rooms beyond.

The lobby flooring is dark basalt stone that matches the dark granite used for the outdoor public spaces at the front of the building.

The lobby desks, lift doors, and other architectural details are bronze metalwork.

The LEED-certified structure was also one of the first in Toronto to use “use treated groundwater as grey water reuse,” according to CIBC Square’s general manager David Hoffman.

Hoffman also told Dezeen that the building was one of the first WELL-certified office buildings in Toronto.

WilkinsonEyre was founded in 1983 by Chris Wilkinson, who passed away in 2021. The studio is known for projects like a covered waterside park in Singapore and a series of luxury apartments built inside decommissioned gasholders at Kings Cross.

The photography is by James Brittain.