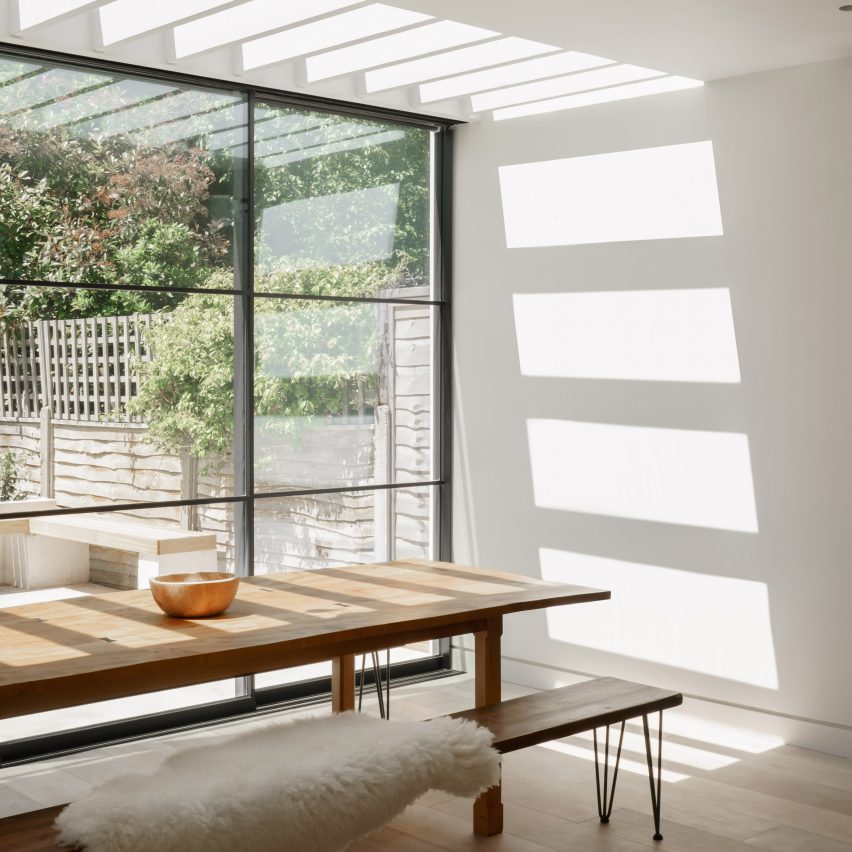 Will Gamble Architects has renovated and extended a Victorian house in south London, with details including casement-style glazing, skylights and a big pivoting door.

Called T-House, the renovation project involved expanding the ground floor of the Victorian terrace to create a more modern kitchen and dining room, adding a new second storey by converting the loft and extending over the rear first-floor bedroom, and adding a small roof terrace.

While the clients had originally envisioned a fairly traditional period renovation, studio founder Will Gamble persuaded the young couple to be more adventurous.

“We felt that this aesthetic didn’t maximise the potential of the house,” Gamble told Dezeen, “so we tried to convince the clients to embrace a more contemporary aesthetic, while still respecting the existing architecture.”

“Eventually the clients embraced this principle and it became the driving force behind the entire design process, a fusion of contemporary and traditional design that complement one another,” he said.

The result is a scheme that combines Victorian period details with more minimalist elements, and also features a range of sophisticated colour tones.

The ground floor extension is the most noticeable of the new additions, with its monochrome tones standing out against the building’s original brickwork.

While the side walls are rendered in plaster, the garden elevation is defined by black zinc panels and a wall of gridded glazing. With its slender glazing bars, this window wall is designed as a contemporary version of a Victorian casement window.

A large pivoting glass door is located on one side, to break up the uniformity of the glazing and provide access to the garden.

Inside, traditional-style kitchen cabinets are painted in a dark shade, yet the room feels open and bright as a result of two large skylights.

One of these skylights sits above a series of exposed roof beams, which creates dynamic patterns of light and shadow over the walls.

“As a result, the interior space is in a constant state of flux throughout the day,” said Gamble.

For the rest of the house, Victorian mouldings such as cornices were “painstakingly” reintroduced throughout as a mark of respect to the building’s history.

These are countered by modern joinery details, such as the built-in wardrobes that line the bedrooms and a storage bench installed in one of the bay windows.

The colour scheme was also designed to emphasise the fusion of traditional and contemporary, with a mix of dark blues and greens, as well as lighter tones.

“We opted for darker colours in the original parts of the house and a more neutral, light-filled palette in the new parts,” said Gamble.

“The depth of the green and blues tones just increases or decreases, depending on where you are in the house,” he added.

“As a result, there is constant colour theme that runs through the entire project, which blends old and new seamlessly.”

T-House is among a handful of projects completed by Gamble since founding his studio in 2018. Others include The Parchment Works, a home created within the ruins of a 17th-century factory, and Burnt House, an extension modelled on a Japanese tea house.

Photography is by Nick Dearden of Building Narratives.

The post Will Gamble Architects puts modern spin on Victorian details with T-House in London appeared first on Dezeen.