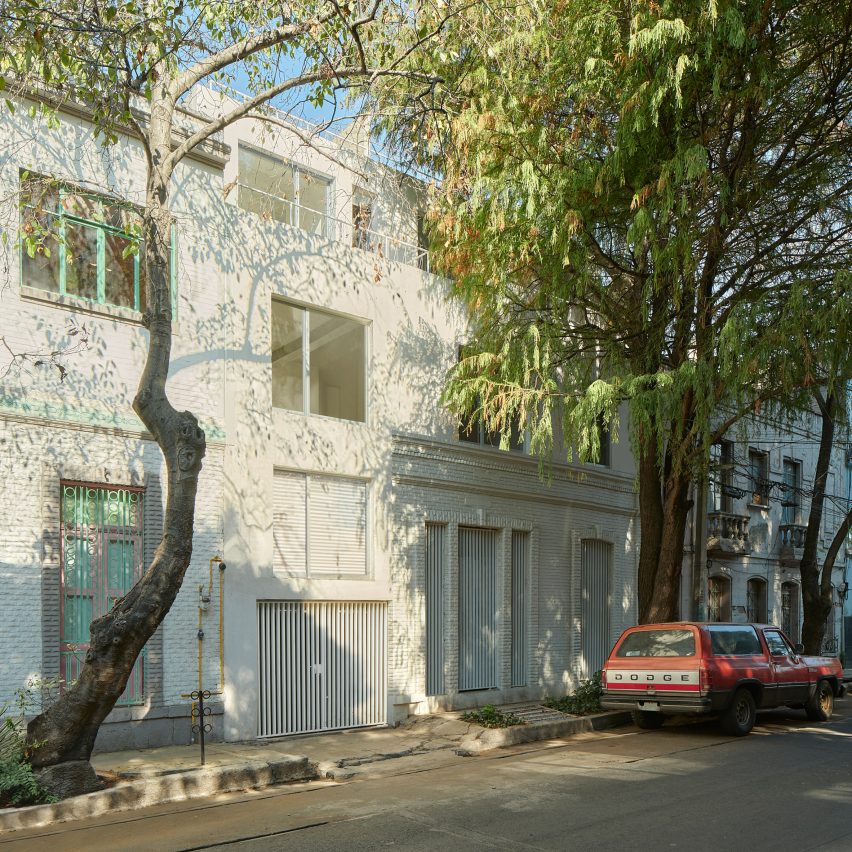 The project is named after the neighbourhood in which it is located, a part of Mexico City that the architects describe as “undervalued”, despite its proximity to the city centre.

“The program is implemented in a typical narrow but deep plot in the Santa María La Ribera neighbourhood,” said the team.

“A traditional housing typology with simple row houses facing a linear patio in Mexico City is re-interpreted as a new apartment building for young families,” the studio added.

An existing building on site was partially demolished, with only the facade remaining intact. From the street, the new and old constructions are juxtaposed.

“The historical facade stands as an honest fragment of the past, now supported by a contemporary earthquake-resistant structure,” said Zeller & Moye. “The two facades, old and new, create a hybrid telling the story of the place’s history to the passer-by.”

On the ground floor, there is a gate that leads to parking shared by the building residents. Another door brings visitors up a short flight of stairs and into a courtyard dense with greenery.

Each of the units has its front door opening onto this shared outdoor space. The compact apartments span three storeys, bringing the total building height to four storeys.

“With a living area including an open kitchen at the ground floor, each flat turns gradually more private with every additional floor,” Zeller & Moye explained.

The apartment layouts include an open-concept kitchen, a living and dining room on the ground floor, a children’s bedroom on the intermediate level, and a larger bedroom upstairs.

The rooftop is accessible from within each unit and provides residents with views of the surrounding treetops and buildings. The stairs, which are made of folded metal plates and supported by steel cables, are illuminated by skylights.

Zeller & Moye chose simple, durable finishes for the interior and exterior of the building. The structural material is concrete, which was polished on the facade to obtain a smoother finish and expose the aggregate used in the mixture.

On the inside, the block walls that separate the units were painted white.

“The pattern of the blocks remains apparent to the inside of the apartments,” said Zeller & Moye.

Terrazzo floors bring some colour into the space and were used both inside and outside to create a continuous surface.

“Terrazzo tiles with local marble stones, traditionally used in market halls, provide a floor that keeps the interior cool and is low in maintenance,” the architects explained. 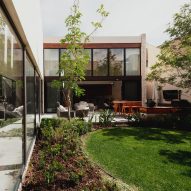 According to the architects, these materials also help keep the building cool during Mexico’s hot summers.

The light colours are meant to reflect direct sunlight, while the thermal mass of the concrete and stone provides a buffer between the ambient heat and shaded interiors.

Zeller & Moye is led by architects Christoph Zeller and Ingrid Moye. The firm also has offices in Berlin. Other projects completed by the studio include a wooden house in a German forest and a modular housing scheme that could expand based on different users’ needs.

The photography is by Sergio López.