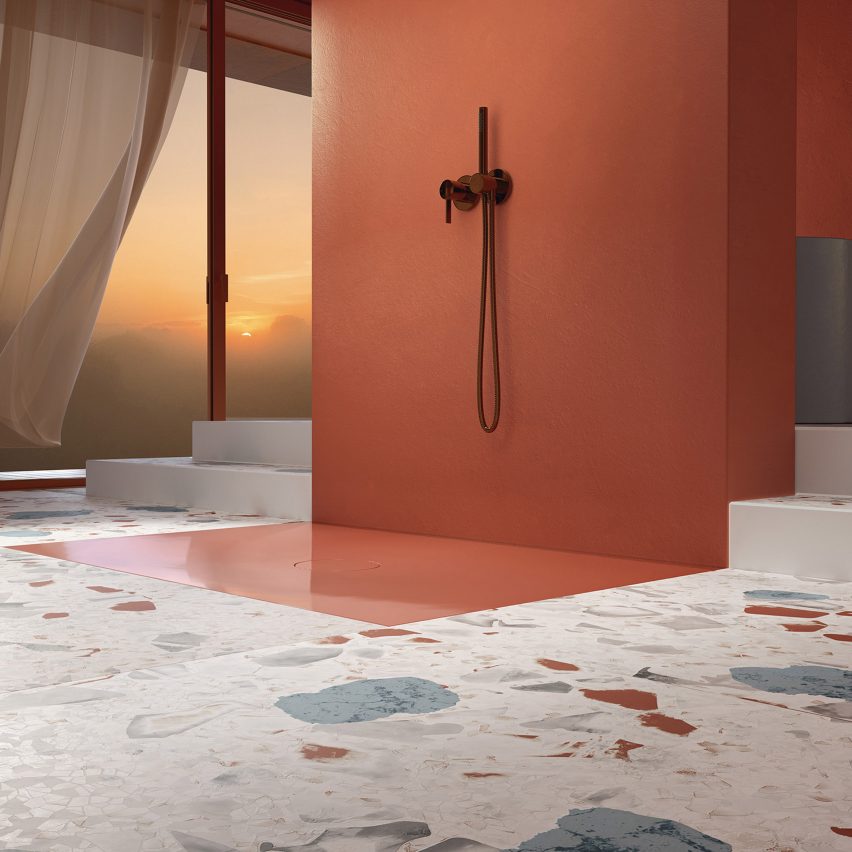 Dezeen promotion: German bathroom company Bette has released the BetteAir range of shower tiles that “complete the evolution of the shower tray into a part of the bathroom floor”.

Designed by Potsdam-based Tesseraux and Partner to seamlessly integrate into a tiled bathroom floor, the BetteAir shower trays can be used to create jointless, floor-level showering spaces.

The trays, which Bette has dubbed the “first shower tiles” due to the thinness and ease of installation, are made from easy to clean glazed titanium steel.

Available in eight formats corresponding to standard shower sizes, the shower trays are each 10 millimetres thick, which roughly corresponds to the thickness of a large-format tile.

They can be glued directly to the floor in the same manner as a conventional tile to create a jointless surface for showering.

“BetteAir has all the advantages of a tile without its disadvantages,” said designer Dominik Tesseraux of Tesseraux and Partner.

“With the shower tile, the floor of the shower is immaculately beautiful, free of joints and thus absolutely hygienic and easy to clean.”

BetteAir is the latest stage in the evolution of the shower tray, which has seen the height of the piece of sanitary wear gradually reduced from around 30 centimetres high in the 1970s.

It follows the BetteFloor, which was the brand’s first glazed titanium steel and introduced the idea of jointless, floor-level showering.

“BetteAir goes a step further and completes the evolution of shower trays to shower floors,” said the brand.

“It is hardly possible to create a shower area that is flatter, at least if the water is still to run off cleanly.”

To incorporate the wastewater drainage, which is covered by a flush cap, the minimum height required to instal the BetteAir shower tiles is 97 millimetres.

Water escapes through a gap of only three millimetres at a rate of 0.6 litres per second, which is sufficient for even powerful rain showers.

Designed to align with, or contrast all bathroom designs, the shower tray is available in 31 colours and a range of finishes. BetteAir can also be equipped with an anti-slip surface.

To find out more about BetteAir visit the Bette website.

This article was written by Dezeen for Bette as part of a partnership. Find out more about Dezeen partnership content here.