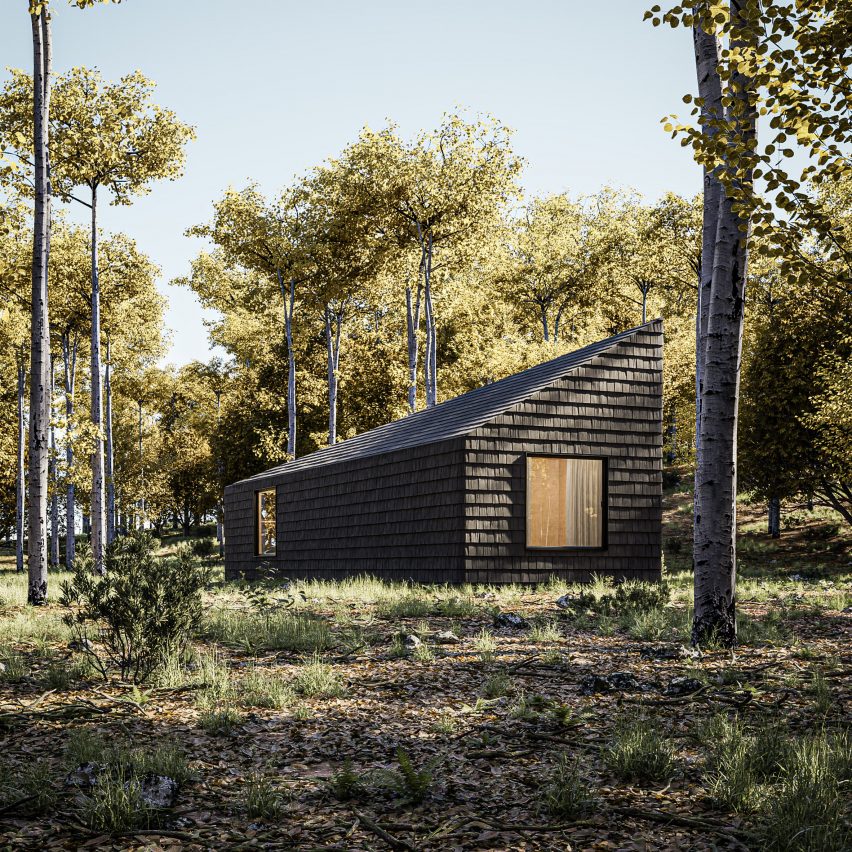 Called Canton House, the project is designed to extend the Tara Luanei hotel in Romania’s Carpathian Mountains, with construction scheduled to begin in summer 2021.

The retreat will include three cabins clad from roof to wall in blackened, locally sourced wood, each featuring a kitchenette, bathroom, bedroom, and utility and storage rooms finished in plywood.

Subtly designed, the cabins will have slanted roofs and take cues from wood shingles often found in Romanian vernacular architecture such as rural towers and church spires.

“The low profile and dark tones of the building do not call for attention, they in fact disappear into the wilderness through the play of shadow and light on the faceted surfaces of the roofline and walls,” Thorpe told Dezeen.

The architect explained how the wooden cabins will operate off-grid. “The cabins will be outfitted with individual solar kits to be installed either on the side of the building facing south or away from the cabin on a small array field.”

“Each cabin will be unique in its energy usage so depending on the client, the solar kit will be suggested,” he added.

According to Thorpe, the design ethos that has governed the project centres on minimalism and ecological responsibility.

Canton House is based on another of his projects called Edifice, a recently designed off-grid stained cedar cabin located in Upstate New York.

As well as the designs for the Tara Luanei hotel, additional versions of the Canton House cabins are currently available to buy and construct in other locations.

American architect Thorpe founded his eponymous design practice in 2010. Since then, he has completed a virtual house with vaulted concrete arches and a conceptual installation for Mexico that resembles a spaceship landing on Earth.

The renderings are by DRVR Studio.