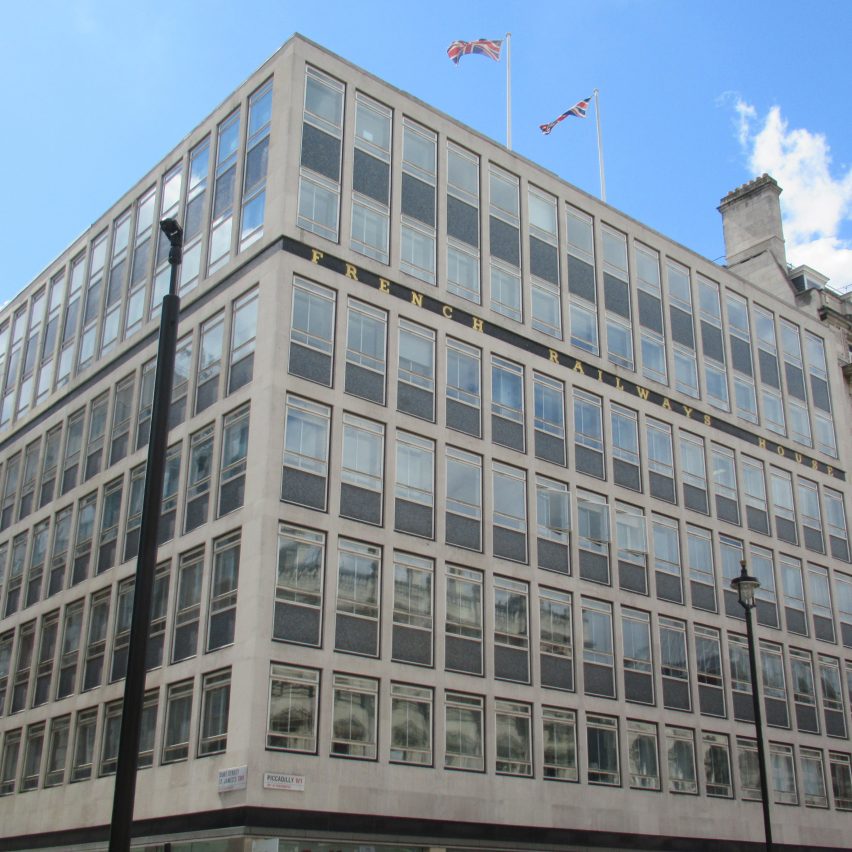 Architects and designers have reacted with dismay to the news that a 1960s landmark in central London will be demolished to make way for a new office development by architecture studio Make.

The City of Westminster has granted permission for French Railways House near Picadilly, which once acted as the headquarters of French national rail network SNCF, to be succeeded by an eight-storey complex designed by Make.

The news, reported by Building Design magazine, prompted a host of architects, designers and critics to raise concerns around the heritage and sustainability implications of tearing down the modernist building.

“What a waste [of] embodied energy, memory, fabric and history,” said the Financial Times’ architecture critic Edwin Heathcote, while landscape architect and Bartlett professor Tim Waterman likened the building to a “dying loved one”.

“Make are replacing the absolutely delightful French Railways House opposite the RA with this pig,” said designer Adam Nathaniel Furman.

The Twentieth Century Society, which previously tried but failed to have the French Railways House recognised as a listed building, said it “deeply regretted the demolition on environmental grounds as well as heritage ones” in a statement on Twitter.

Justin McGuirk, chief curator at the Design Museum, argued that the building should instead have been retrofitted to lower the embodied carbon of the project, especially in light of the latest and most alarming IPCC climate report.

“Make is set to demolish a good modernist building – which BTW had interiors by Charlotte Perriand and Ernö Goldfinger – and replace it with this pastiche,” he wrote. “We really need to be curbing demolition not encouraging it.”

The built environment is responsible for 40 per cent of global greenhouse gas emissions, 11 per cent of which is embodied carbon – the emissions associated with the materials and construction of a building before it even opens its doors.

Retrofitting offers a way to reduce this footprint as it mitigates the emissions derived from the sourcing and assembling of new materials, as well as with demolishing the existing building and processing the waste generated in the process.

However, Make has defended the project, telling Architects Journal that while a retrofit was initially considered, this plan was abandoned due to the building’s narrow plan, low floor-to-floor heights and limited options for new services, which made it “not suitable for a modern office”.

Modernist building “not considered to be of significant design merit”

Designed by Shaw & Lloyd, the French Railways House was completed in 1962 and distinguished by its protruding lettering and interiors designed by modernist architects Ernö Goldfinger and Charlotte Perriand.

But these original features were removed and its street-level loggia filled in to accommodate shops when the building was renovated by Ian Mcardle Architects in 2013.

The “starkly horizontal, largely glazed” building was “not considered to be of significant design merit” according to a report from the City of Westminster planning applications subcommittee, which gave Make permission to demolish the French Railway House alongside a neighbouring building.

In their place, the firm will erect a 10,000-square-metre complex for Great Portland Estates, which will house workspaces on the upper floors and retail and restaurant units below. It will also feature three terraces and a double mansard roof with a garden.

“The most sustainable building is the one that already exists”

Make said it is investigating the reuse of some of the French Railways House’s original Portland stone facade, while its foundations and basement will stay in place to form a cycle parking facility.

“It is correct to say the most sustainable building is the one that already exists but if it no longer fulfils its basic functions and cannot be made to work efficiently, then it is not a sustainable proposition,” Make told AJ.

“The proposed scheme is to retain the existing foundations and basement – typically the largest embodied carbon element of a building – and to build as light a new building as possible above to make the substructure retention possible.”

The final building will have an embodied carbon footprint of 560 kilograms of carbon dioxide equivalent (CO2e) per square metre, which would earn it a medium C rating under LETI and RIBA’s embodied carbon targets.

In the UK, there are currently no regulations that require the reporting or reducing of embodied carbon emissions. But initiatives including ACAN and Part Z are lobbying to change this.

“Regulating embodied carbon is vital for the construction industry in tackling the climate crisis,” Jenny Stephens of Feilden Clegg Bradley Studios told Dezeen as part of our recent carbon revolution project, which explored how carbon could be removed from the atmosphere and put to use on earth. “The industry is ready for this.”

The post Critics mourn modernist French Railways House as "dying loved one" ahead of planned demolition appeared first on Dezeen.