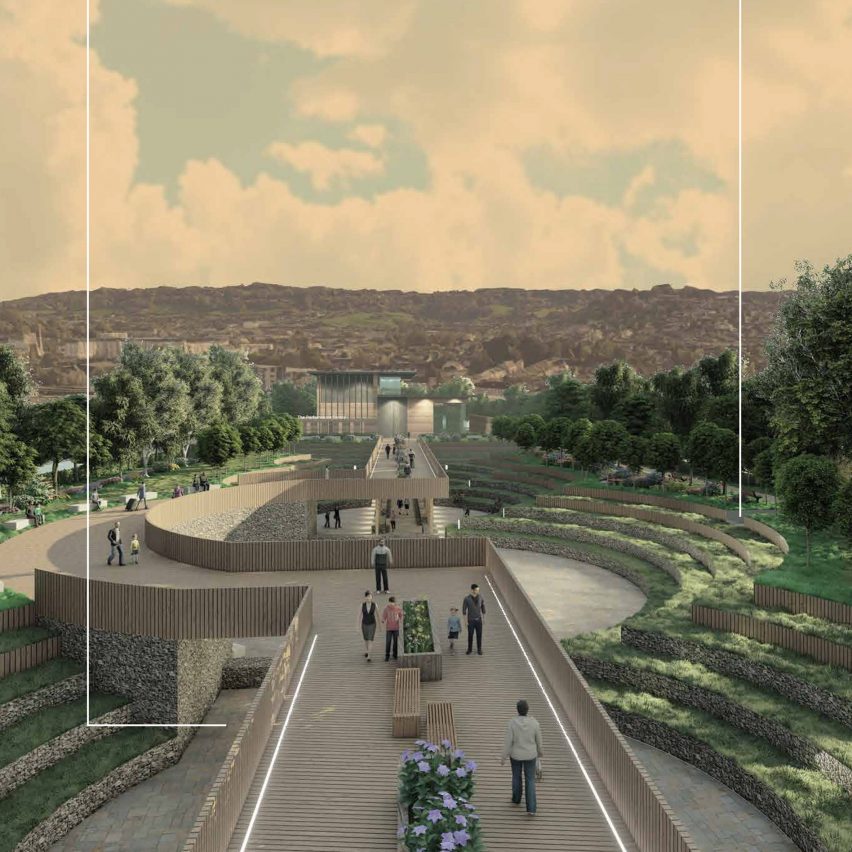 A project that reintroduces endangered countryside animals into an orchard environment and a church ruin in Bristol transformed into an educational kitchen are included in Dezeen’s latest school show by students at the University of Reading.

Other projects include a proposal that merges architecture and landscape design and a centre for the rehabilitation of badgers.

“The School of Architecture at the University of Reading engages the complex issues facing architecture in our society today, including the environment, re-use, collaborative innovation and creating equalities. It includes a topology of practice-based research and precisely situated studies in design, technology and theory.

“Our students work alongside academics and practitioners and look beyond the transient and the topical to frame precise methodologies and expertise in relation to these borderless concerns as they flow inexorably across our local and European contexts.

“Imagination and new thinking establish new links between the conceptual and the contractual; every day and the abstract; the pragmatic and the speculative; the interviewer and the interviewee and our experiences and our possibilities. Interpreting these circumstances gives us opportunities for positive change.

“These are outtakes from the end-of-year online exhibition ‘Adaptations’, which is now available on the University of Reading’s website.” 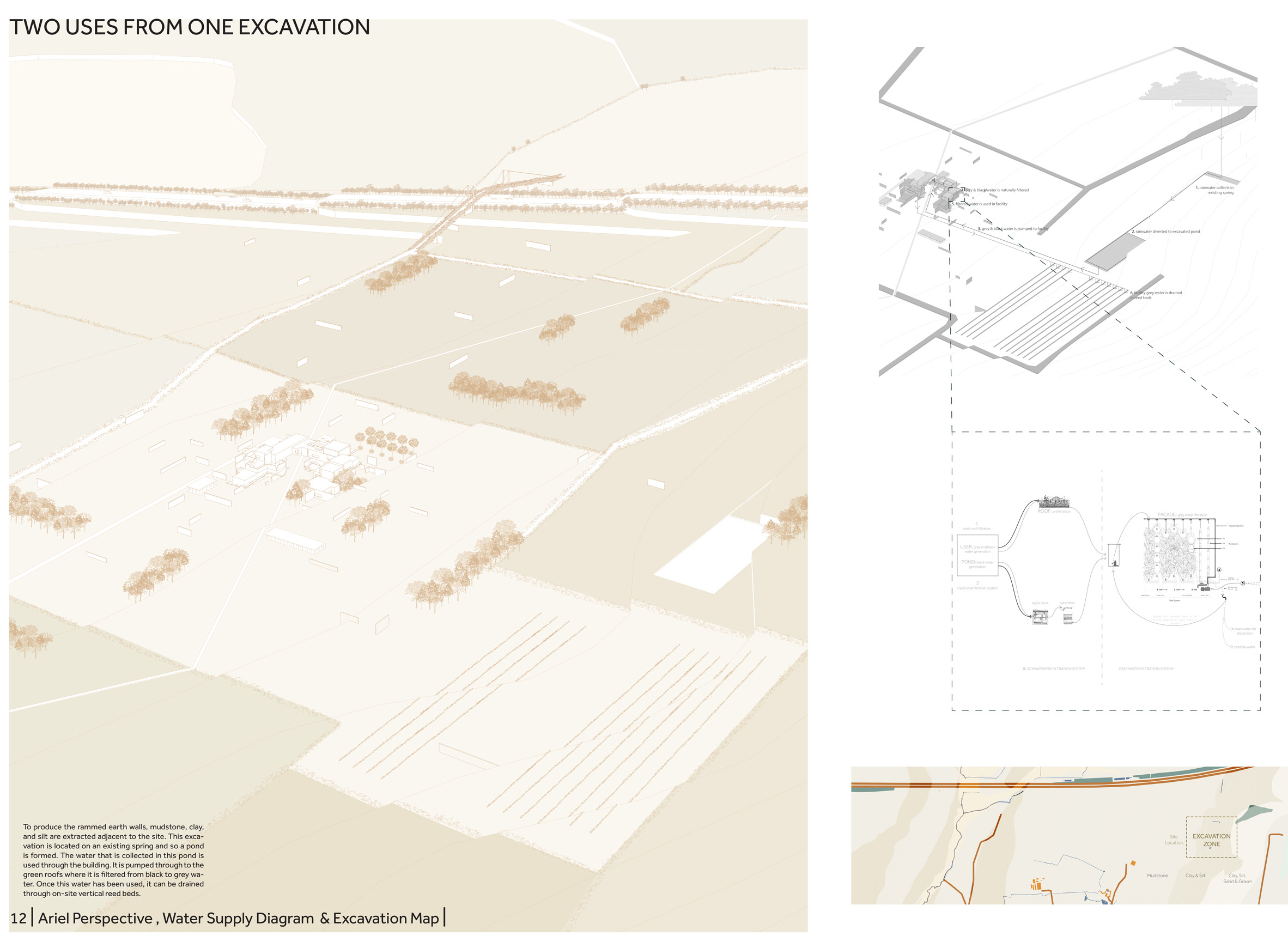 “Located in an almost flat, open field landscape, this proposal is conceived as a human-made hedgerow. It is an investigation into the merging of architecture and landscape.

“Conceived to be self-sufficient as possible, it utilises solar energy, heat recovery, natural ventilation and natural water filtration from the adjacent pond.

“Earth walls disperse outwards from the facility into the landscape, representing the roots and weaving structure of the hedgerow, whilst also framing views and connecting to the far horizons of the surrounding landscape.

“The fractured and dispersed walls create a multitude of courts and sheltered gardens referenced back to the traditional fruit walls of England.” 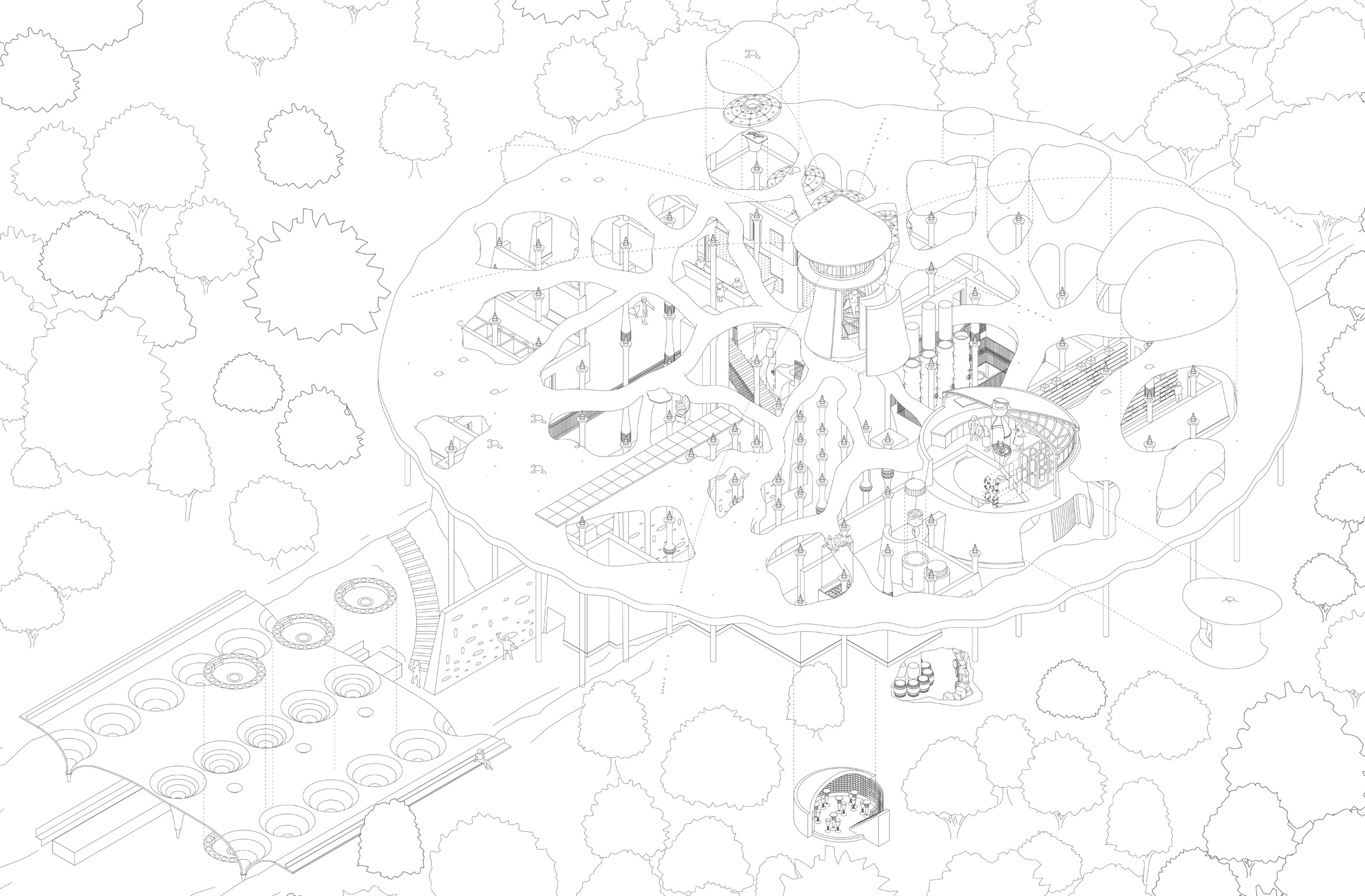 “The project is a ‘collaboration’ between clay target shooters, badgers, fungi and trees. Set along with the M4, earthworks are appropriated as sites of diverse life instead of specific human functionality.

“The building and badger tunnel bridge, which spans the M4, are linked by paths and tunnels through wild woodland, full of shooting huts and badger sets.

“The cob and mycelium building hosts a badger vet, cherry winery, shooting clubhouse, and mycelium moulding facility. Life flourishes within, and the product of these unusual relationships is a sustainable, diverse and exciting landscape, driven by organic processes.” 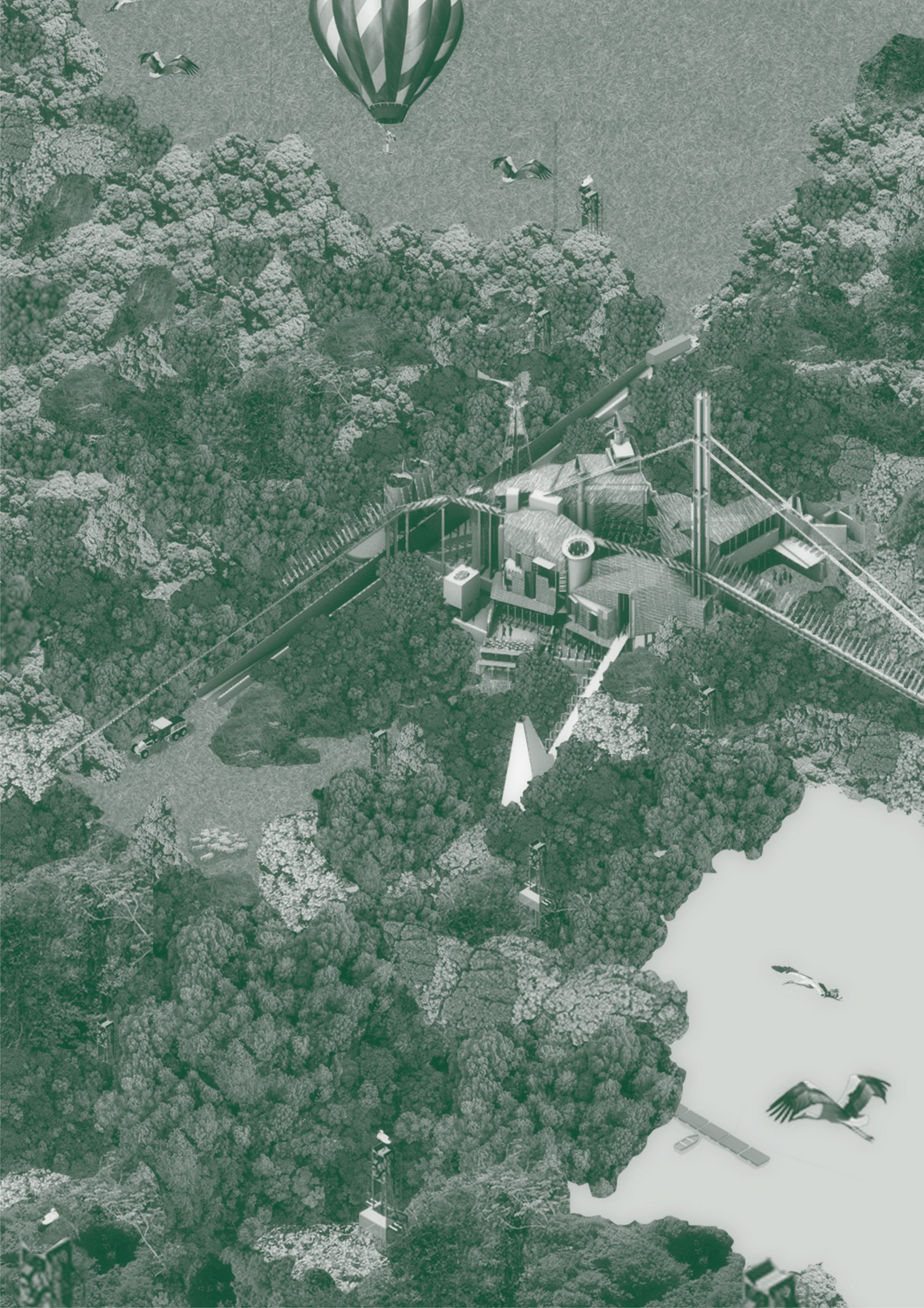 “The AR project proposes a way in which we can better integrate into the rural landscape. As we gradually cut ties with the EU and move away from the single farm payment, agriculture in the UK will go through the most significant transformation since the post-war era.

“A farmer’s subsidies will no longer equate to the amount of land they farm, but how well they can maintain and enrich the ecology of their land and incorporate ecologically beneficial practices. 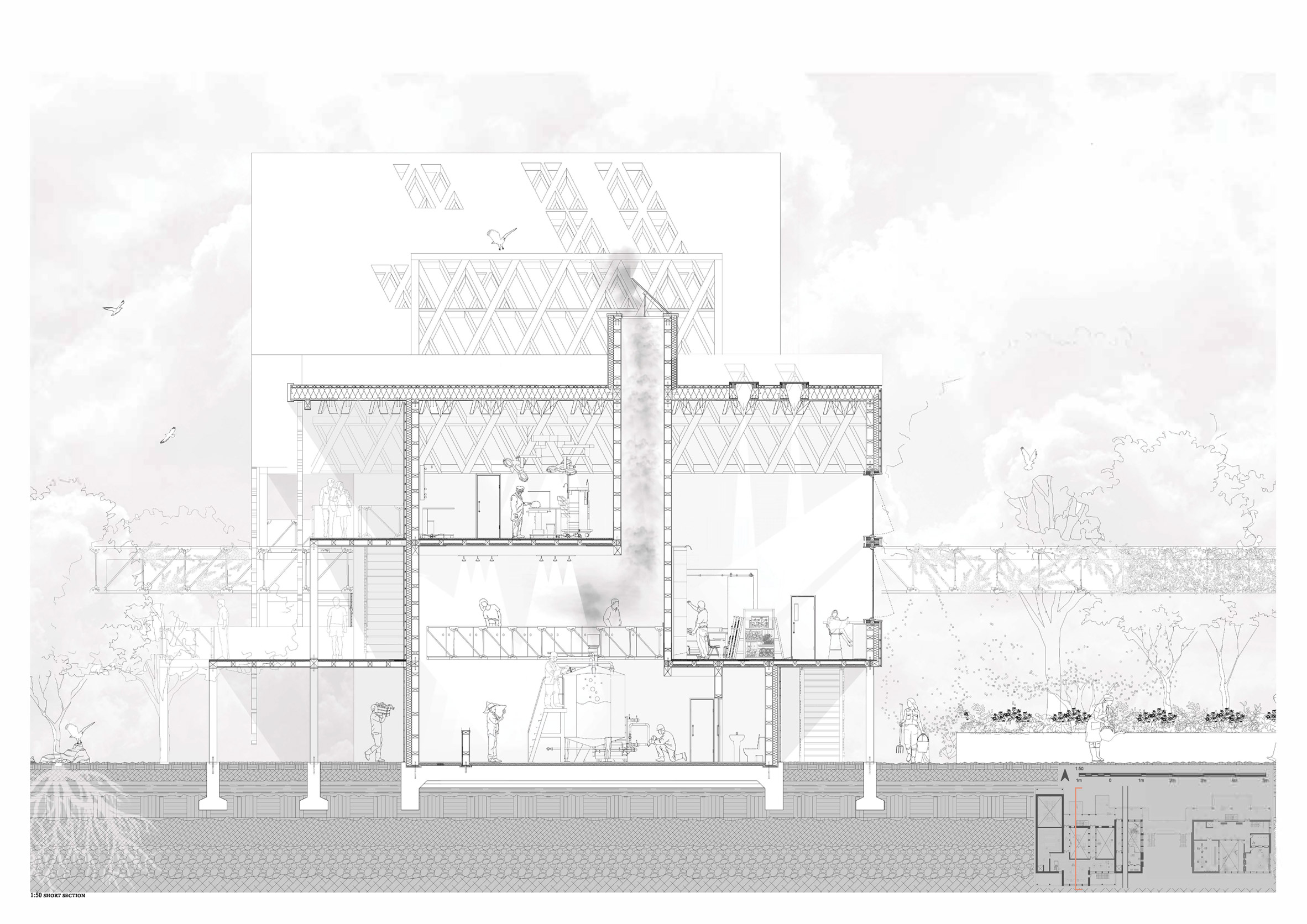 Revival of the Orchard by Rosie Clark

“Situated in an open field landscape in southern England, this proposal introduces endangered species of countryside animals into a new traditional orchard environment. Drawing inspiration from the local vernacular, the truss form of the timber-framed facility gives character to the spaces offering respite, care and breeding facilities for birds, dormice and hedgehogs.

Conceived to repair habitat fragmentation created by the M4, an animal bridge extends from respite care spaces to the wider landscape, composed of a network of habitats for species outlined in the National Biodiversity Action Plan.

“By creating a landscape designed for the re-establishment of biodiverse ecosystems, proposals encourage biodiversity and ecological complexity, whilst restoring a historical farming landscape.” 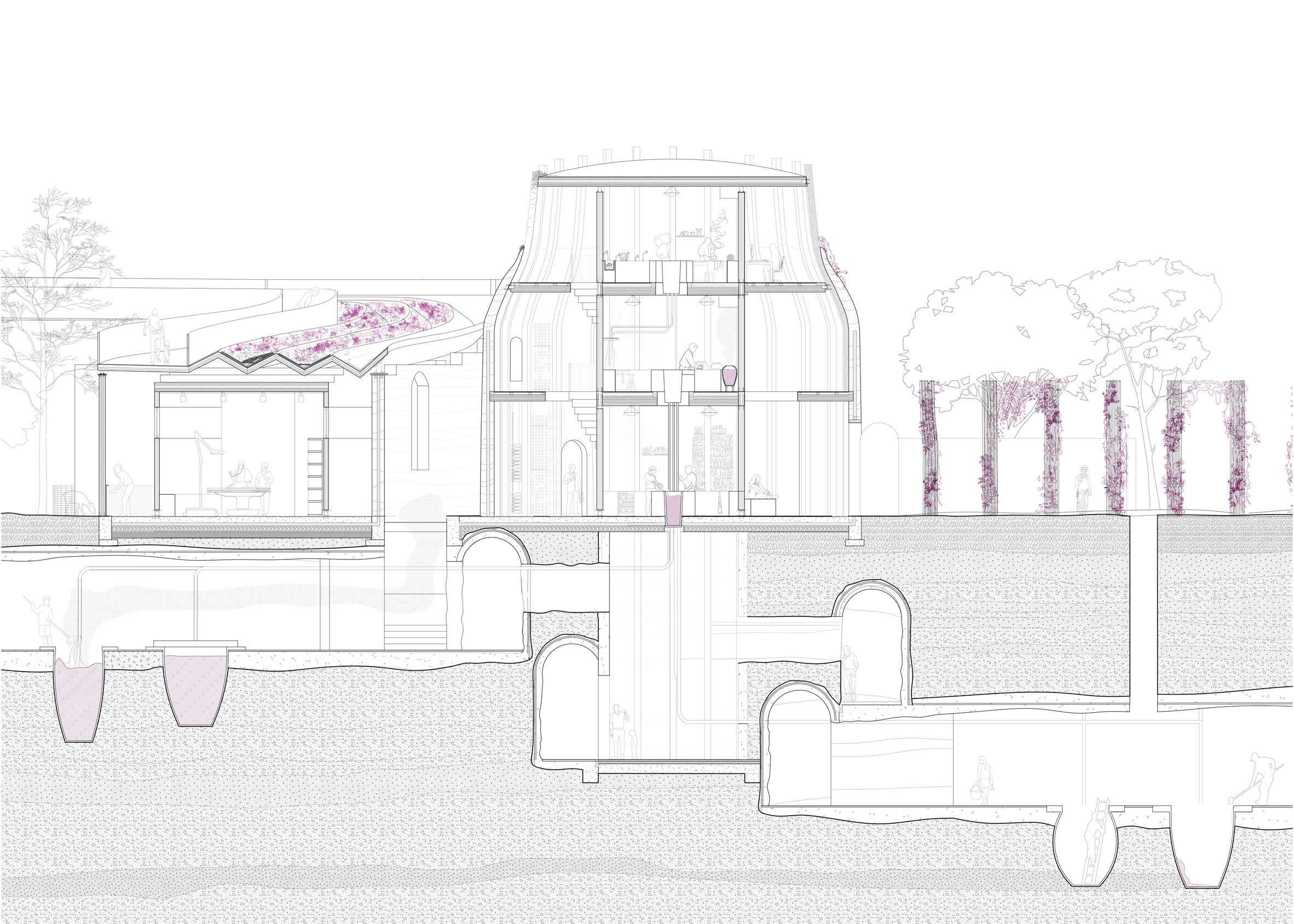 From Strata to Structure by Sofia Sergiou

“This project aims to map the natural past of a site, adding to its history and letting the geology and landscape guide the scheme’s placement design.

“My designated site was the location of rare, well-preserved fossils and shells, which led to me selecting snails as my endangered species for the project.

“Continuing with the theme of pests, I selected brambles as my orchard fruit, something that is seen as a weed of sorts, being internationally grown. This was then aged in clay pots underground using an ancient method, almost being treated as a fossil itself.” 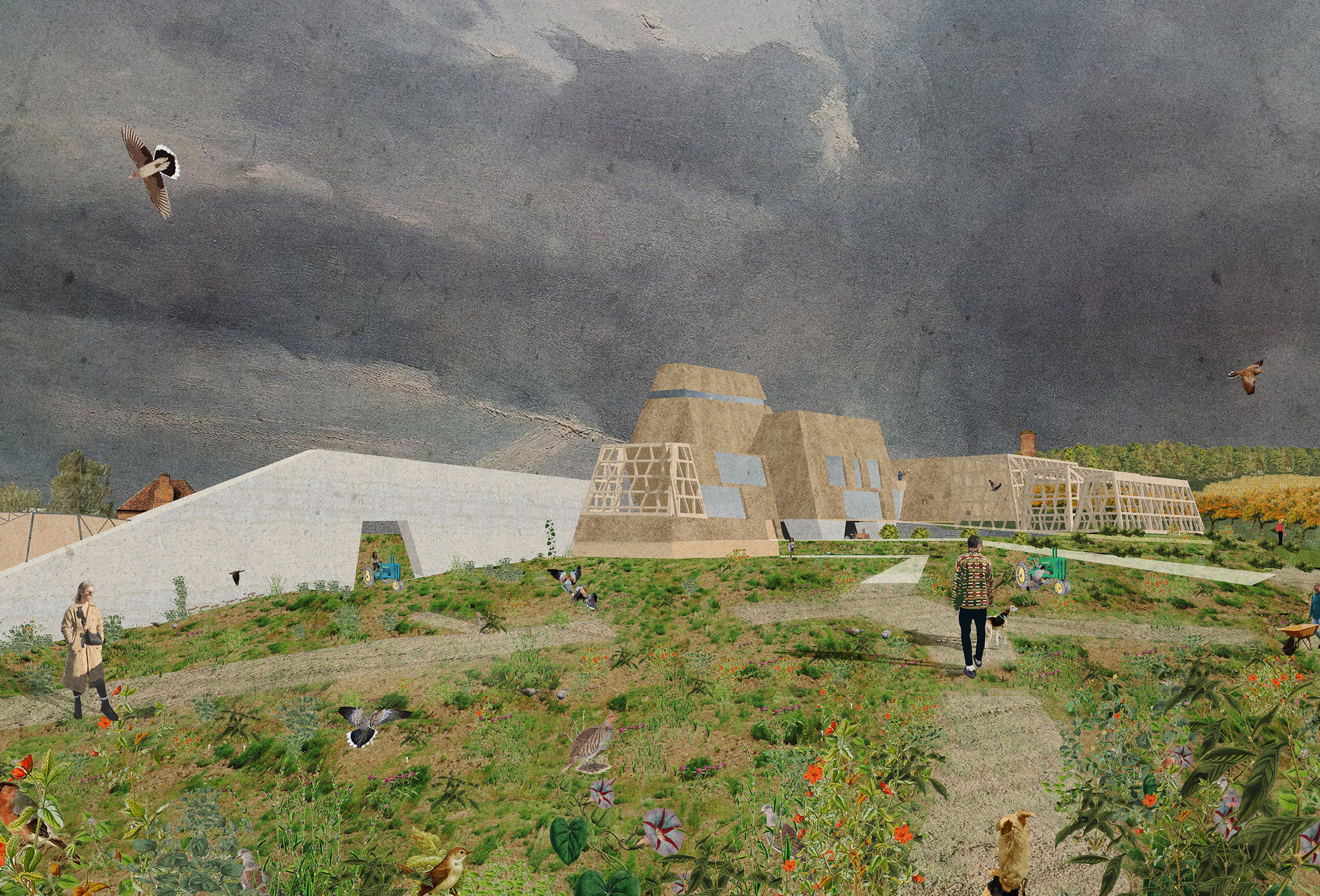 The Formalisation of Nature by Tom Rogan

“Thatched tapered forms, inspired by both dovetails and William Morris textiles are integrated into the undulating landscape. The resulting project forms a sensitive mosaic of wild-flower meadows, hedgerows of hawthorn, mulberry and elderflower, rewilding an area once consumed by agriculture into a long-term habitat for local wildlife.” 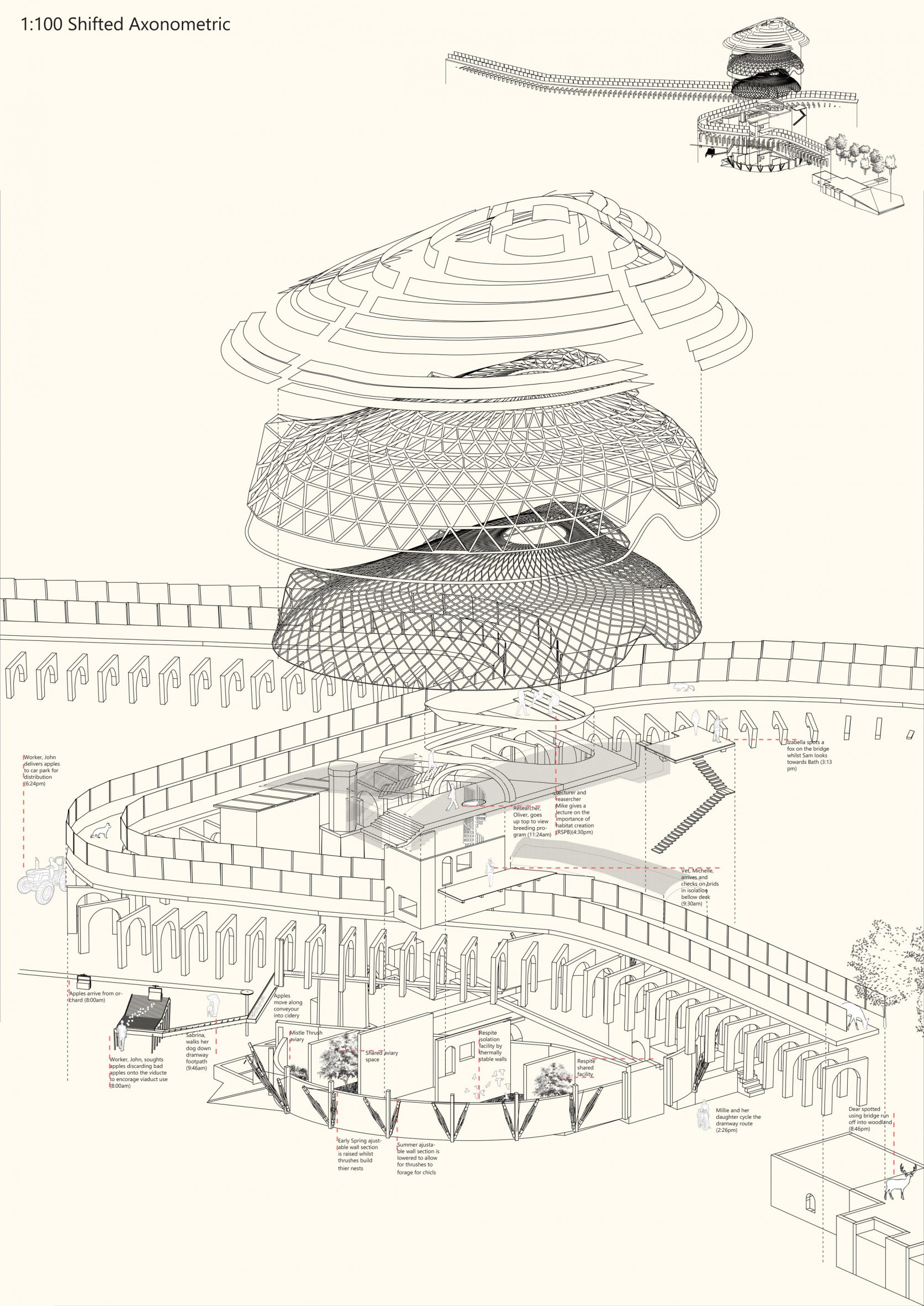 “The remnants of historic mining and lost rail lines form the spine for a new architecture for refuge and renewal. Ancient and fragmented tales of mythology to ecotherapy were discovered here to create new narratives of dislocated places and tales. King Bladud’s recovery from leprosy and St Anne’s healing well, intrinsically connected with nature, still run the length of the site.

“This proposal feeds off a system of corridors and habitats to provide a place with a refuge, centred around the timber three-layered gridshell atrium. A sensitive approach is merging old and new structures and pathways to re-connect the past in the present.” 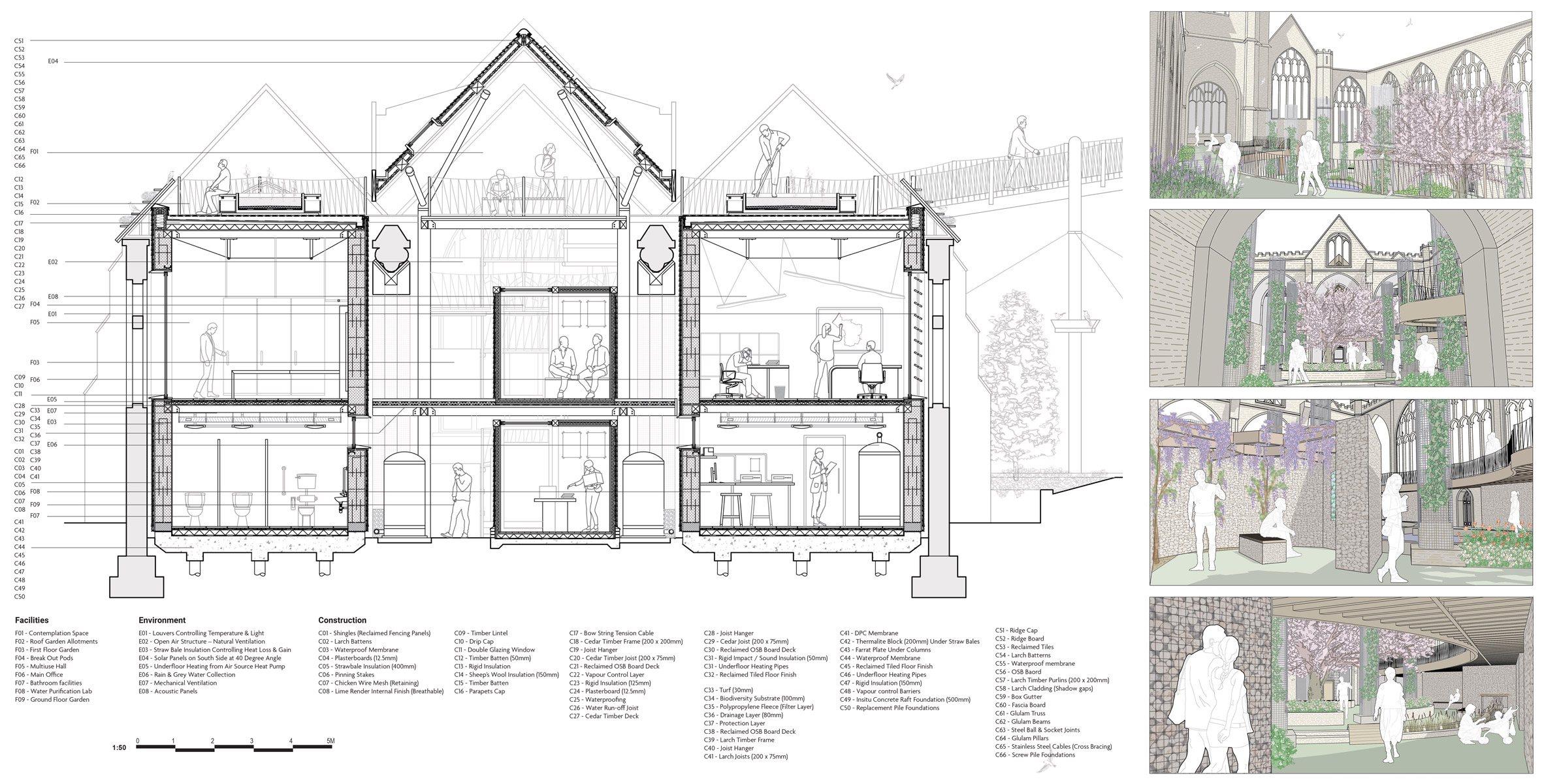 An Urban Escape, Bringing Balance to Bristol by Adam Dobson

“With the increasing pressures of modern-day life combined with the demise of natural habitats and the climate emergency, this project looked to create an outlet by repairing, re-purposing and rewilding Bristol’s Temple Church, a Grade II* listed ruin.

“The proposed public mental health and well-being service provide ecotherapy whilst subsequently increasing the biodiversity within the urban context.

“Adopting a regenerative design approach, the project looked to utilise locally-sourced reclaimed materials, whereby ‘whole system thinking’ was integrated into the design, creating a resilient site-specific intervention that aims to leave the ruin, the people and local wildlife in a better condition.”

“The project is centred around regenerative design and radically retrofits a Grade II* listed church ruin in Bristol into an educational kitchen. It seeks to encourage community interaction and collaboration through urban food production and the celebration of cultural events throughout the year.

“Allotment spaces are designed to collectively grow food, which can be harvested and used within the cultural kitchen for events and education as well as donated to vulnerable communities suffering from food poverty.

“Whilst demountable construction techniques respect the site’s heritage, the choice of materials and environmental strategies, such as rainwater harvesting, biodiversity gain and renewable energy production help to limit the project’s total embodied carbon.” 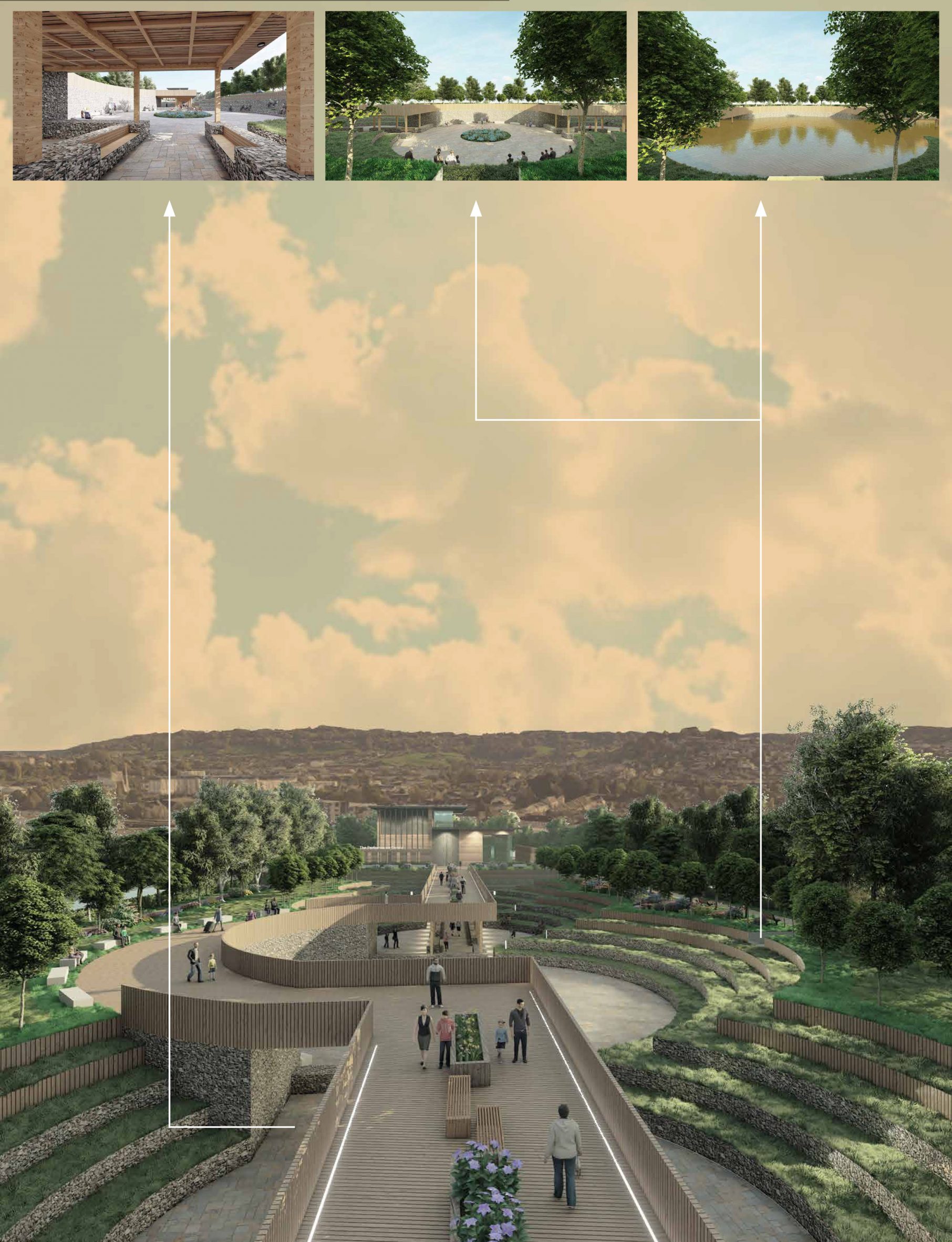 “The proposal for the Weston Island redevelopment project sought to reshape the existing landscape of the island to accommodate public inhabitation, inspiration and future flood mitigation.

“The project aimed to reinvigorate the island and promote the bridging of the surrounding communities regardless of the demographics they find themselves situated within, as well as to radically reuse both the existing structures and the landscape to form the proposed structures.

“Rammed earth was utilised as a driving component throughout, where 40 per cent of the build-up of walls were derived from the excavated subsoil from the proposed terraced SUDs System.”

This school show is a partnership between Dezeen and The University of Reading. Find out more about Dezeen partnership content here.

The post Ten end-of-year architecture projects from students at the University of Reading appeared first on Dezeen.