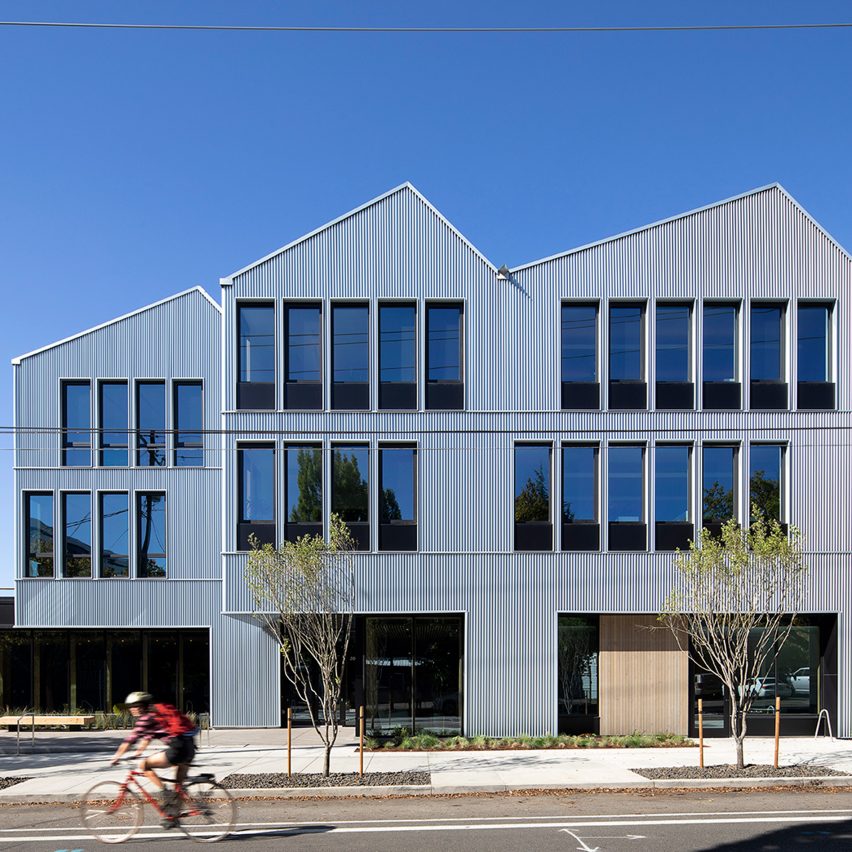 Structural plywood was used to help reduce the carbon footprint of an Oregon office building designed by Lever Architecture for a nonprofit organisation.

Located in Portland‘s Albina neighbourhood, the building serves as the headquarters for Meyer Memorial Trust, a charitable foundation focused on racial, social and economic justice.

Local studio Lever Architecture designed the facility to embody the foundation’s commitment to equity and sustainability. The architects took a “bottoms-up approach” to the design process and sought input from the organisation’s staff throughout the project.

Rising three levels, the 19,800-square-foot (1,839-square-metre) building is roughly rectangular in plan and stretches across a wedge-shaped site.

Facades are clad in grey-stained cedar and custom steel panels. Folds in the metal siding create a play of light and shadow throughout the day.

The building is topped with a sawtooth roof, which takes cues from the gabled roofs and porches historically found in the area, before the construction of a freeway in the 1960s decimated the neighbourhood.

“As design developed, the roof gables flattened out a bit to optimise the amount of solar exposure we could get on the roof for solar panels,” said Chandra Robinson, firm principal.

“This roof form also allowed us to install skylights, which bring soft north light into the grand, mass plywood stair and a quiet room on the interior.”

Inside, the facility is divided into two primary zones. A three-storey volume holds flexible workspaces and meeting rooms. A single-storey pavilion – called the Center for Great Purposes – contains an event space and adjoins a garden.

“The focal point of the building is the 100-seat convening centre for public programmes and collaborations with partner organisations,” the team said.

While the office zone features traditional stick-frame construction, the event centre is made of mass timber, which was purchased from an Oregon lumber company.

The plywood was used for columns, beams and decking. Additionally, structural plywood mullions were used in the centre’s curtainwall system.

“Mass plywood was selected to highlight the beauty of this innovative industrial material, support our local rural economy and decrease the embodied carbon footprint of the building by reducing the amount of fuel needed to transport the materials to the site,” the team said.

Interior finishes include acoustical slats made of hemlock certified by the Forest Stewardship Council. Different types of flooring were used, including maple, polished concrete and carpet. 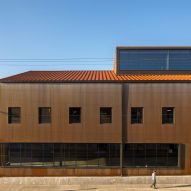 To create a suitable backdrop for artwork, the team painted walls in rich shades of blue. The client has an extensive collection of donated art, and, additionally, it commissioned new work by artists who are Black, indigenous and people of colour (BIPOC).

Throughout the building, the team sought to create a welcoming and inclusive environment. A diversity of cultures is represented in signage and artwork, and furniture is designed to accommodate different body types and physical abilities.

“We designed the spaces on the interior to create equitable spaces where staff can flourish every day,” said Cecily Ryan, the interior design director at Lever Architecture.

The facility has a number of sustainable elements, including a high-performance building envelope, an energy-efficient heating and cooling system, on-site stormwater management, native vegetation and the solar panels.

The project has earned LEED Platinum certification from the US Green Building Council and is enrolled in the Path to Net Zero, a program offered by the Energy Trust of Oregon.

Other projects by Lever Architecture include a winery tasting room that features walls made of cedar and glass, and an addition to The Nature Conservancy building that was constructed using cross-laminated timber.

The photography is by Jeremy Bittermann.